I mean, ever since I took up karate as a young boy and started watching those cool samurai movies on a Saturday morning.  It was enough for me to take an interest in the (at the time) very exotic country that seemed all so alien to my limited Western brain.

The more I looked into Japan, the more intrigued and perplexed I became; in particular, their seeming obsession of turning everything into an art form, with strict disciplines.  Their even stricter social dictums and norms; the way in which even the simplest of acts had to follow very clear, if unwritten rules that very much control their society.

But also, their ability to produce absolute beauty, with an almost innocence that belied their very violent history, internally and across the region.

Which is why it was incredible that it wasn’t until my 5th decade on this planet that I finally made my way to Tokyo; and although my trip was short, it was everything I could possibly have hoped for and more. 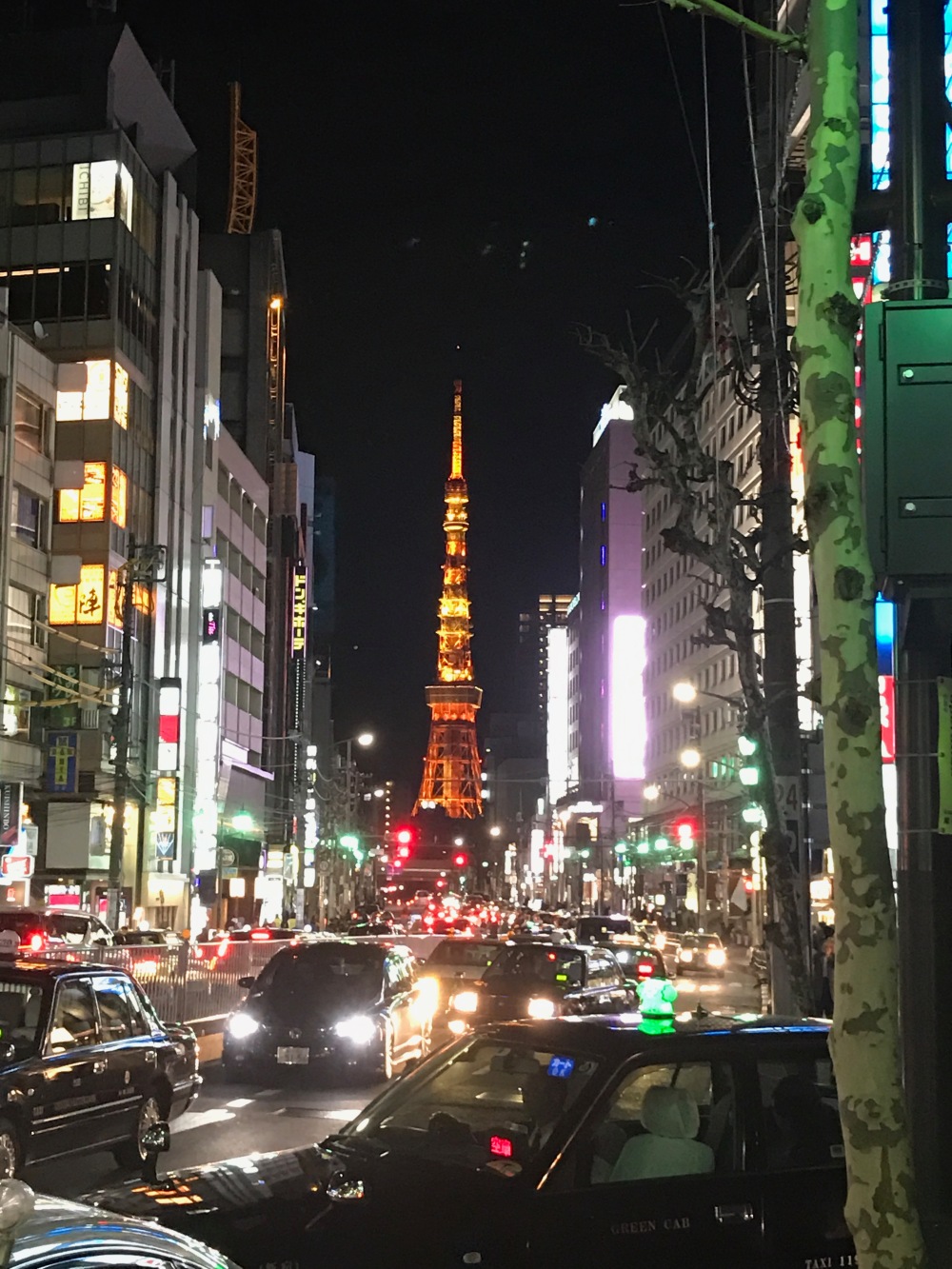 Ostensibly, we were in Tokyo to further my own obsession with visiting some of the best restaurants on the planet.  There was an intersection between the nuances and intricacies of the Japanese culture, all the way through our trip and our meal; it started off as you’d expect.

Firstly, we were visiting world #52 restaurant Nihonryori RyuGin (at the time it was #31); a restaurant where bookings can only be made in Japanese and via a Hotel and a restaurant that did not allow cameras inside at all (although phone cameras were OK).  Knowing it would have been difficult to make a booking on my own, I’d approached a local chef I know quite well, who’d worked at the famous restaurant previously, which made the booking quite a breeze.

RyuGin is located in Roppongi, one of Tokyo’s cooler locations and is helmed by Seiji Yamamoto; a man who has done incredibly well with his omakase style restaurant.  I mean, achieving three Michelin Stars and peaking at #20 in the San Pellegrino Worlds50Best list is impressive enough.  But when you consider that RyuGin is considered one of Japan and Asia’s best restaurants, and that Tokyo has more Michelin Stars than any other city in the world, you start to get a feel for how impressive Chef Yamamoto really is.

We arrived right at the allotted reservation time and were greeted in traditional Japanese style by wait staff who were dressed as traditional Geisha.  Shown to our table, I marvelled at the beautifully appointed interior and as I sat at our table, noted the precision in which our napkins were displayed.  There was quite subdued lighting, which helped make the open dining room feel a little more secluded.  Most impressive was a dragon mural with backlighting across the opposite wall. 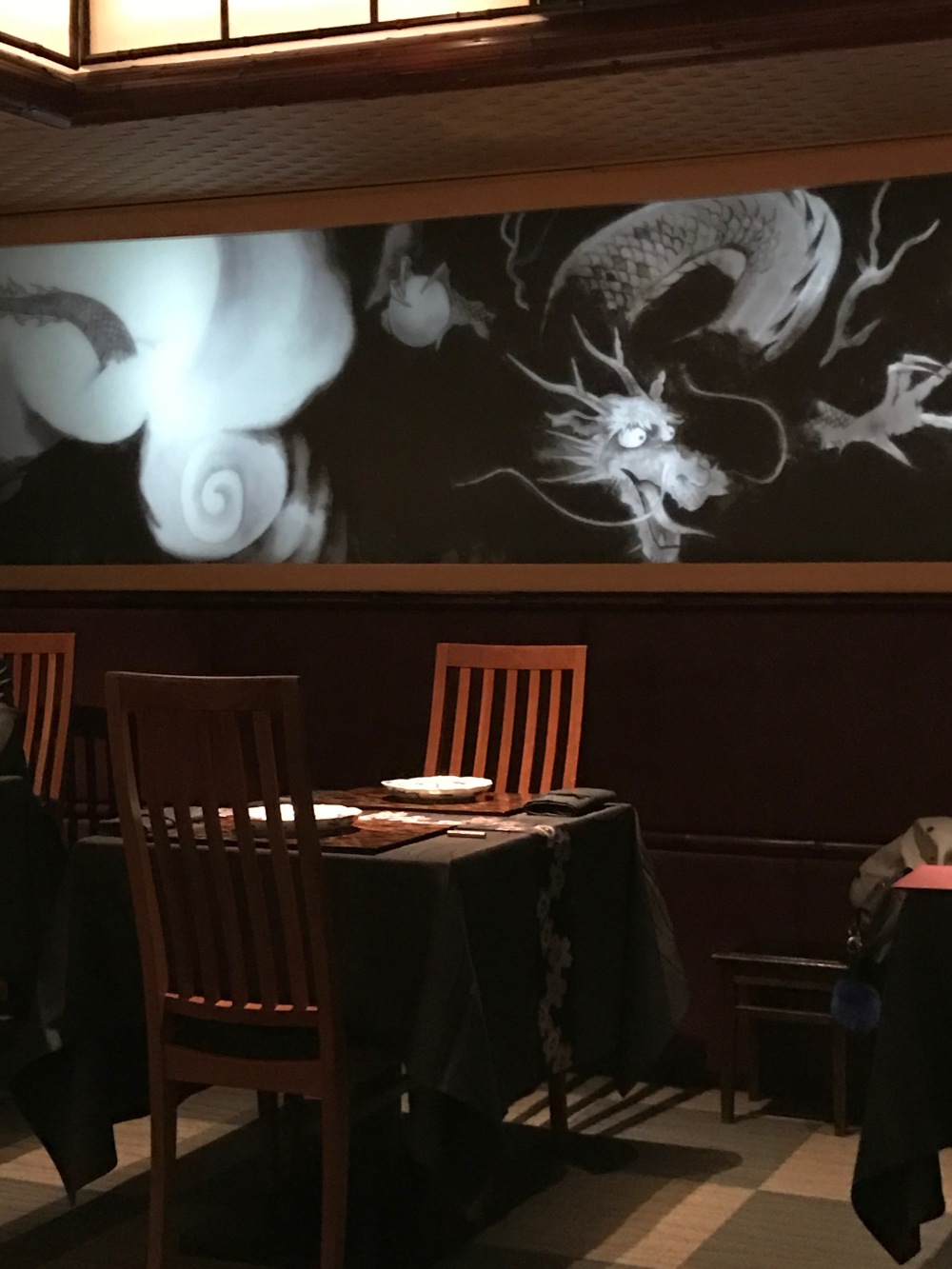 We were immediately given a shot glass that contained plum and seaweed tea; it was quickly dispatched, leaving a subtle fruity aftertaste on my palate.  Next, we were presented a tray filled with different coloured boxes that held individually marked chopsticks that would accompany us through the meal; then as it turned out, make the trip home with us! 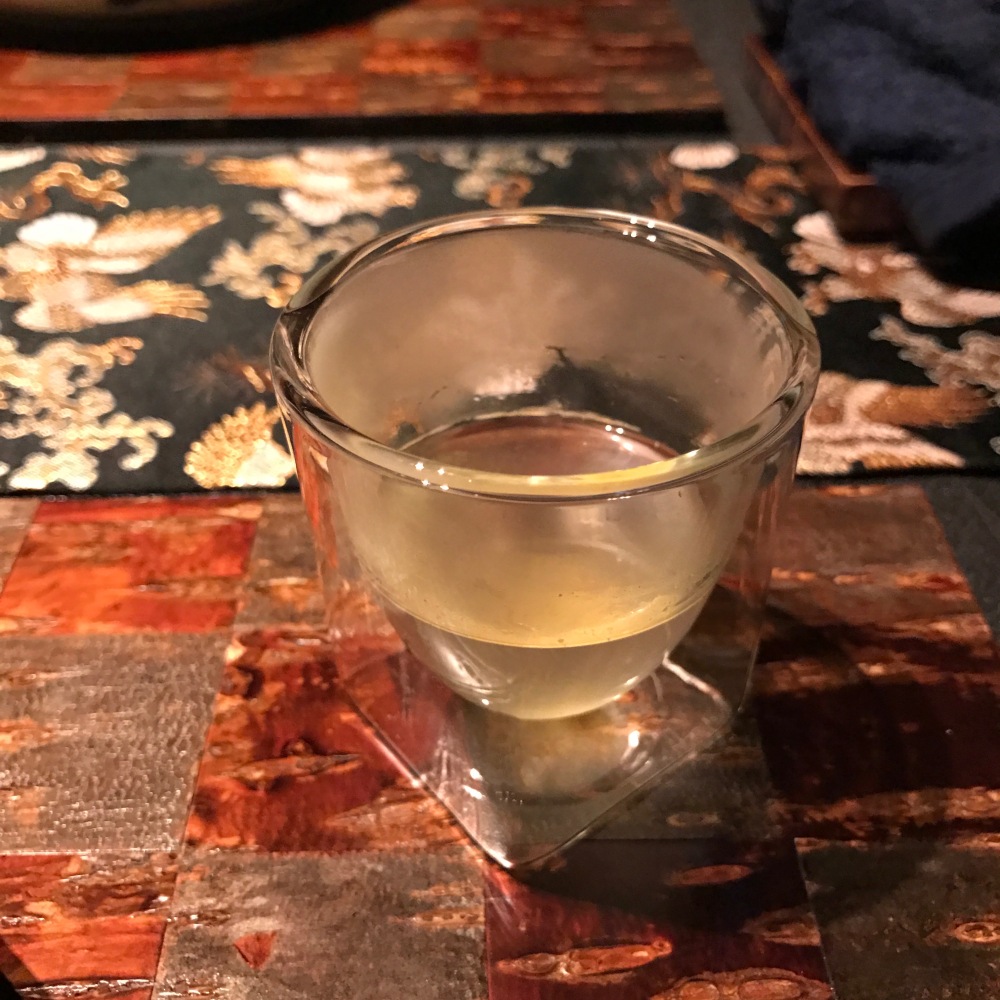 We opened the envelopes that were delivered, which held the story of our culinary journey; not quite a haiku, but still a wonderful telling of the chef’s story in food.  Lastly, we were given glasses filled with water; itself not so special, until you noted the perfect representation of Mt Fuji at the bottom of the glasses.  They were amazing and showed the level of attention to detail that I’ve come to expect from Japanese chefs. 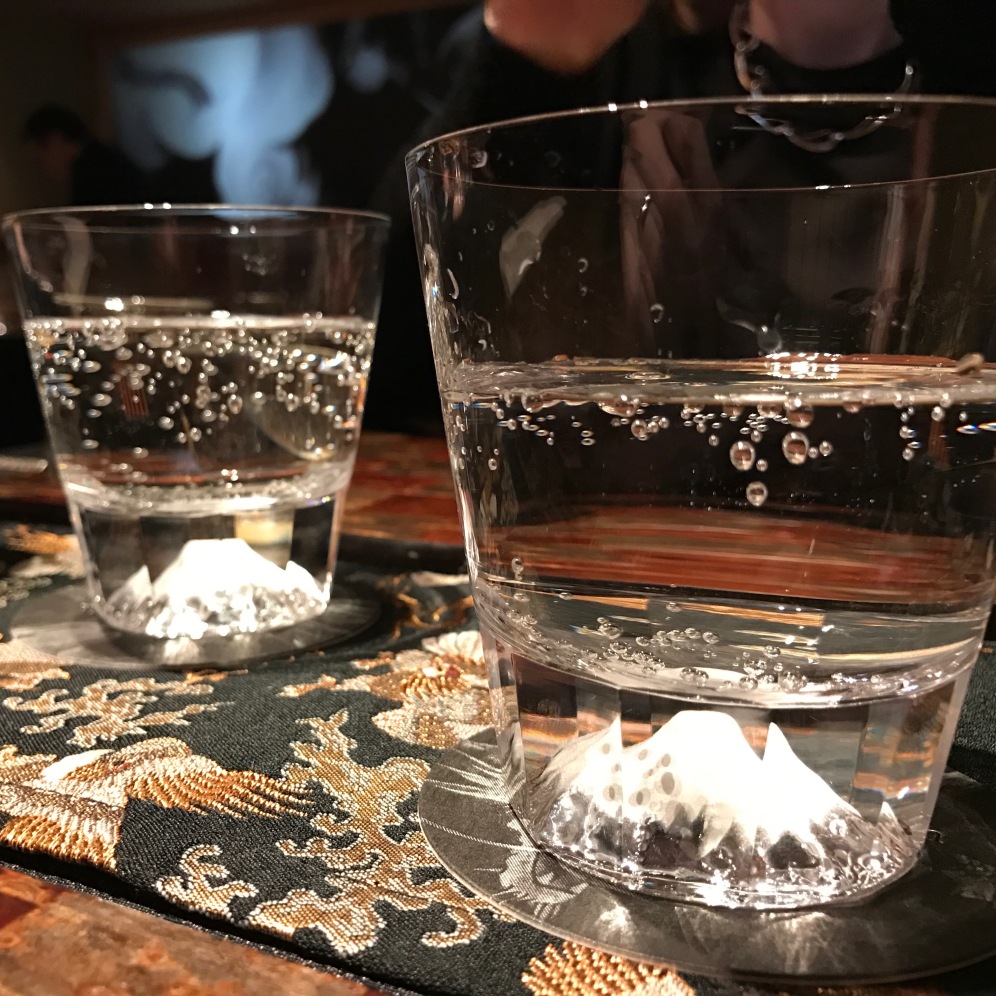 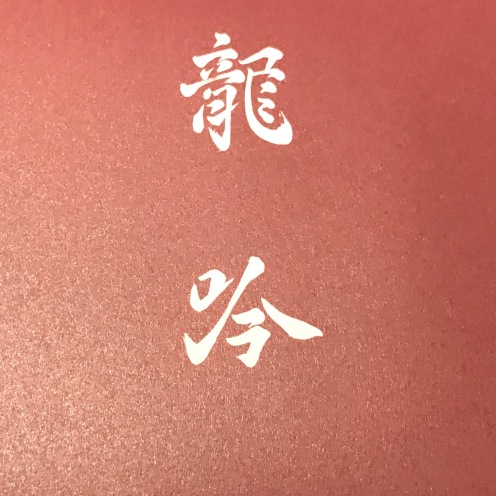 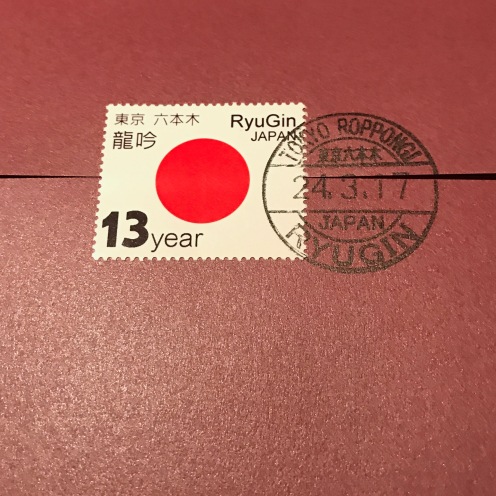 Our meal kicked off with Beginning with a variety of sensations… – using seasonal produce to hit aroma, temperature, texture and assemblage.  Salty sea urchin from Hokkaido, wrapped in seaweed then deep fried and presented with broad bean puree.  I felt that it was a little under seasoned, although the uni should have provided the salty hit.

Creamy white miso soup was incredibly sweet, with a strong flavour emanating from herring; the texture of the fish firm and delectable on the palate.  There was shrimp shaped taro with the dish, with a texture that seemed a little chalky to me, but worked very well with the dish.

The last sensation was beautiful in that way that Japanese cuisine can be; it was a squid head filled with squid and accompanied by young pea and bamboo shoots. There was a very sticky soy sauce pulling the components of the dish together.  There was contrasting sweetness with the dish, the squid cooked expertly and providing a subtly chewy sensation when consuming. 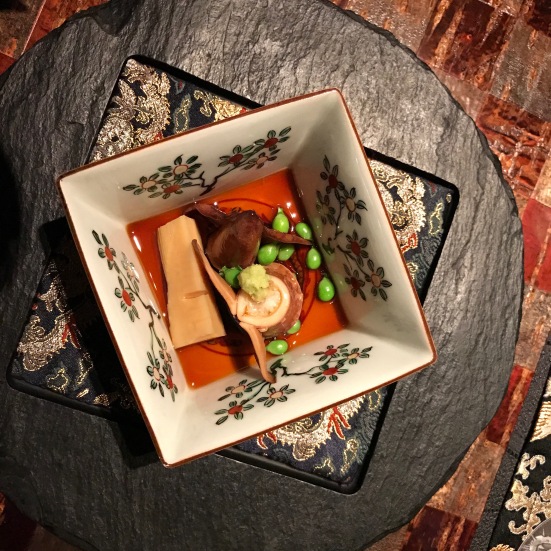 It was time for Owan Soup : Philosophy on the Iciban Dashi – large black bowls with lids were presented; and when opened up for viewing, contained a clear broth from Mt Fuji Water, expertly cooked tilefish and yuba egg tofu.  It was an interesting dish, with the broth having very little in the way of flavour, but offset by the very sweet fish and extremely creamy tofu.  Perhaps the idea of the benign broth was to allow the fish to speak for itself, but I’d have loved some extra depth to have come from the soup.  Interestingly, at the bottom of the bowl was a representation of the God of Thunder and Wind; not completely reflecting the (lack of) power of the dish. 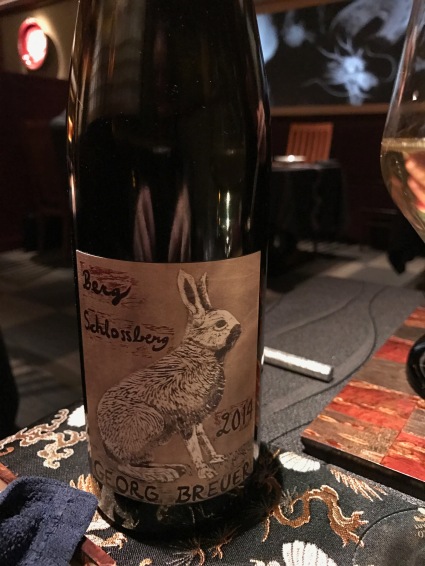 I loved that the tray that our next dish was presented on was made from the same material as the table; it meant that when placed in front of us, it disappeared, as if by magic!  It was time for Sashimi : A message from the Coast of Japan – three plates of sashimi that included the famous fugu.  Now if you’re not familiar with Fugu, watch this Simpsons clip, explaining the potentially deadly ramifications of eating the wrong part of a puffer fish…  The fugu was served with monkfish, and I found the combination a little chewy but sweet and clean on the palate.  Naturally, I didn’t die from the experience 🙂

Also quite spectacular was Binchotan : A Powerful Scent of Charcoal grill…. a wonderfully prepared slice of kinki fish that was topped with peppery sansho leaf and sat on grilled eggplant.  There was great synergy between the components on the dish, but my favourite was the combination of the crispy skin of the sweet fish and the peppery hit of the sansho leaf.  I would not have missed the eggplant, but I’ve never been a fan anyway…

I was surprised by the timing of a little palate cleanser of thinly sliced green apple and a ginger broth; which was quite well balanced and not overly harsh.  I’d normally have expected the palate cleanser to come out just prior to the desserts….

Hunting History – Savour the Wilds in Forest was without doubt my favourite dish of the night!  Expertly prepared and presented Ezo Venison from Hokkaido formed the centrepiece of the dish, ably supported by mushroom chips and winter chestnuts.  Seasoned perfectly, the tender venison had a beautifully sweet undertone that was superb when combined with some slightly burnt onion that it sat on, and the Japanese coleslaw (served on the side).

Our last savoury dish had that classic signature dish feel to it; The Country of Rice-plants – Pleasure of eating of the same trencher.  Using the pheasant, the national bird and tofu to form a chrysanthemum, the national flower, there was a very nationalistic theme to the dish.  I absolutely adored the RyuGin version of fried rice, which was rich in flavour provided by the gamey pheasant.  I was less a fan of the chrysanthemum soup, and while it was quite beautiful viewing and clearly prepared with skill and precision, it was still just a bowl of tofu soup….  Again, not a fan personally, although the girl did think I was little nuts – she loved the soup…

First dessert was very Japanese in its make up; Lusciousness – coolness, warmth, playful spirits, nostalgia and temptation.  There was a lot going on in a very small package, which looked beautifully complex and simple (at the same time).  I was surprised how much I enjoyed the dessert, given the abundance of white bean paste; but the stewed strawberries and vanilla ice cream worked sensationally with the bean paste and ‘mocha blanket’ the components were wrapped in. 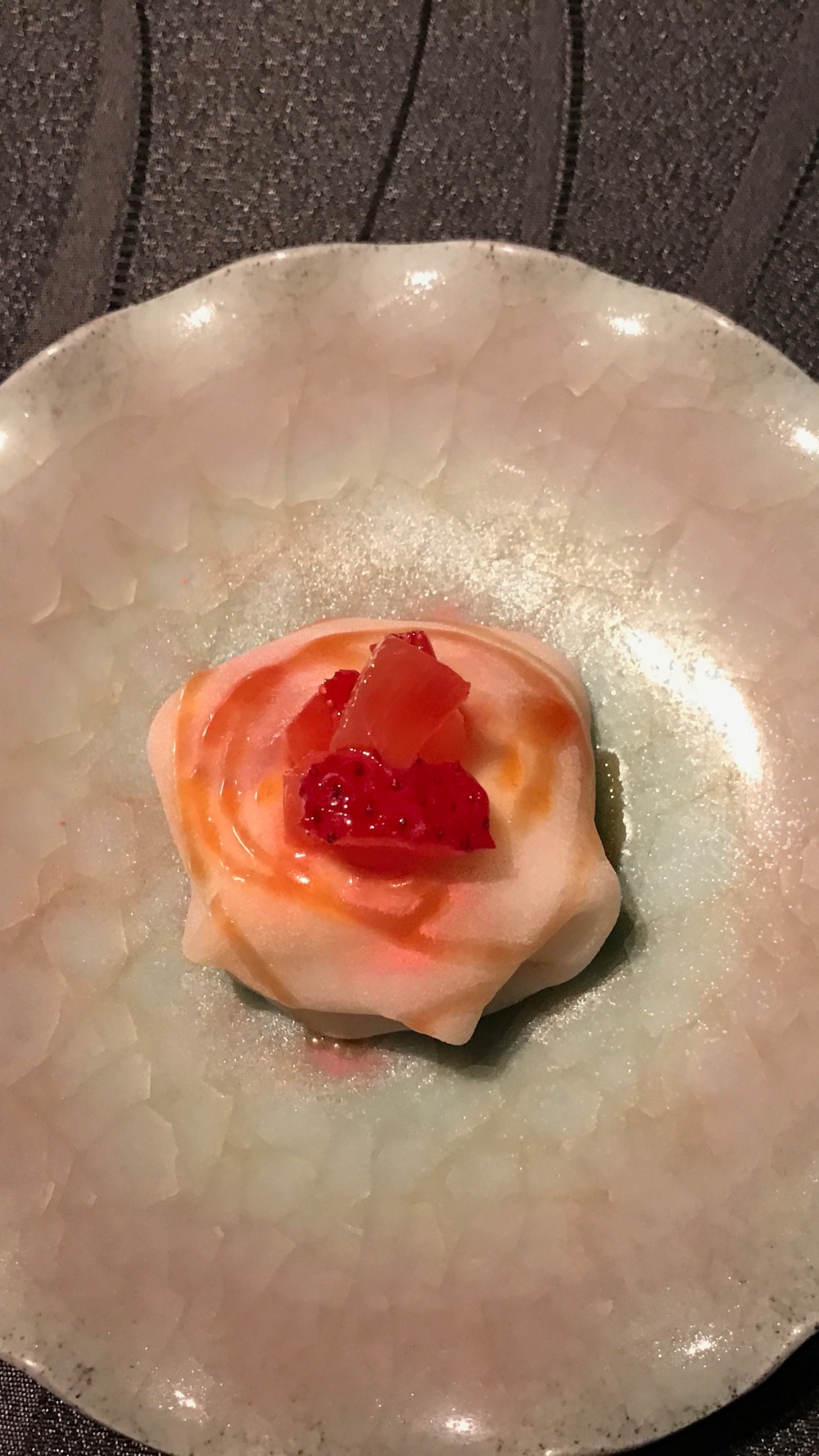 However, the final dessert was an absolute triumph of creativity and finesse.  I’d never seen a square soufflé before; but that exactly what Oryzane “National Fungus” pride of Japan was!  Served with a side of hot and cold sake sweet flavours, the soufflé was subtle and sweet, leaving me wanting a whole lot more (it was definitely a small serving).  While the two components of the final dessert were quite separate, it really felt as thought the combination of flavours were needed to offset each other.  Yeah, it was both special and different at the same time… 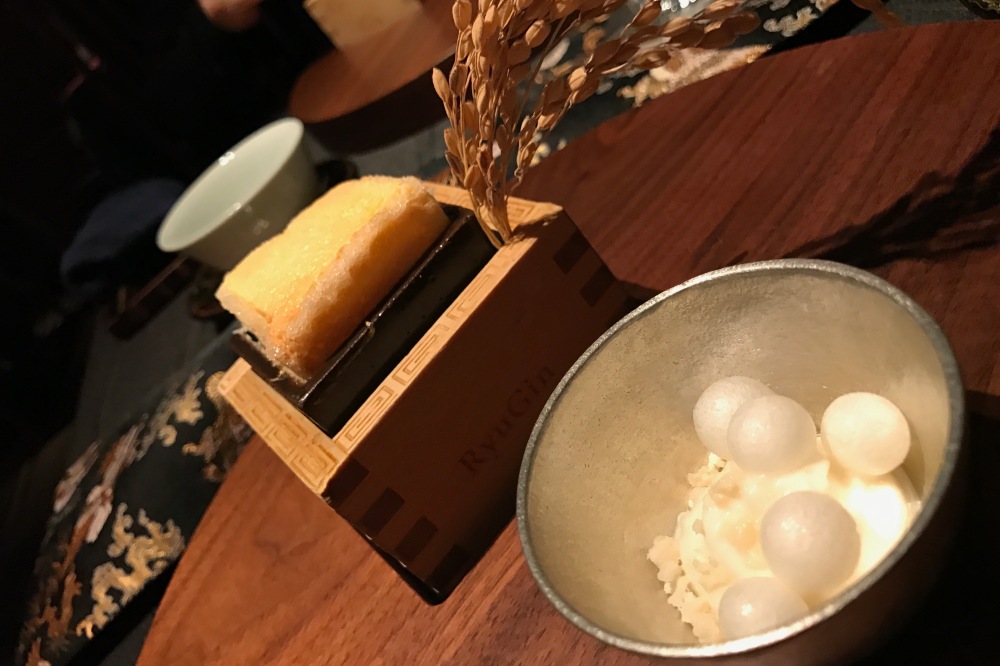 We finished off the entire meal with the very Japanese Matcha Tea; which probably was the wrong way for me to end any meal; I mean Matcha?  Really? It’s such an acquired taste, I should have known better….

I’d been excited about visiting RyuGin for a very long time; given it’s status as one of the world’s best restaurants, and awarded with Three Michelin Stars.  Moreso, it was part of a quick stop to Japan and Tokyo, something that I’d been wanting to do for as long as I could remember.

While the meal was definitely memorable, it was probably not quite up to the expectations I’d set; nor was it even close to the best Japanese meal that I’ve had.  But having said that, I’ve come to the conclusion that not every meal I eat has to be the best ever….that I can enjoy a meal for what it is – food put together by a dedicated chef with mad skills and a vision of the type of food he wants to share with the world.

We were happy to have a limited conversation with chef Yamamoto, who’d made his way from the kitchen to say goodbye; always appreciated when spending big in a restaurant…

Would I go back to RyuGin?  Nope, but not because I don’t think I’d enjoy the meal again. With another 227 Michelin Starred restaurants, including 12 Three Starred, there are just too many delectable options; there could be no going back! 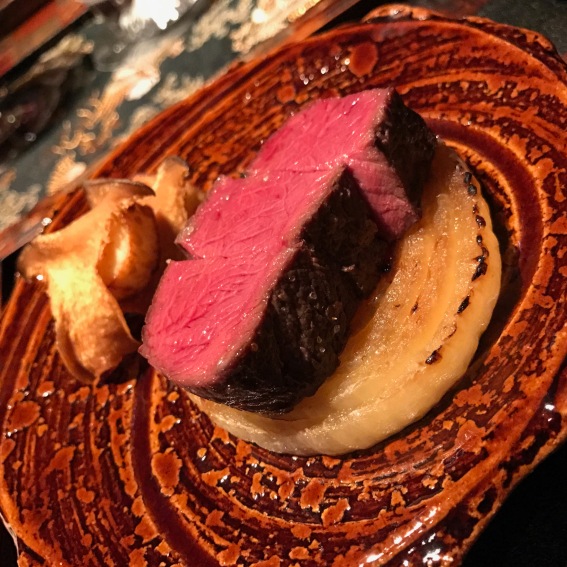 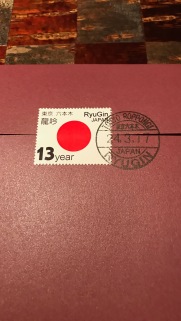