If someone asked you to describe what ‘Southern Californian’ cuisine was all about, could you?

Up until recently, I don’t think I could have!

Commissary is the restaurant that might just be able to open up the whole Southern Californian culinary scene; especially if the Culinary Director has anything to say about it.  Morgan McGlone may be a New Zealand-born Australian, but deep in his heart, he’s an honorary Southern gentleman and, after working in the well known South Carolinian restaurant Husk, is bringing something a little different to our shores.

Together with diehard Southern Carolinian Executive chef Adam Shoebridge and uber HK restauranteur Yenn Wong of the well known JIA Group, the trio have created a space that brings touches of Southern American flavours, mixed with Mexican influences and then given a bit of SoCal (Southern California) glamour treatment.

When I arrived at the quite contemporary looking Commissary, I was completely surprised by how quickly the Pacific Place restaurant had appeared.  The area that used to be a high end fashion outlet had been completely transformed and in its place was an alfresco area fronting a cool looking dining area that was a mix of styles and was hard to pin down to any particular look and feel.  Modern art adorned the bare concrete walls, tables were odd shapes and sizes and the space had a general ‘right now’ feel that was both homely and restaurant(y). 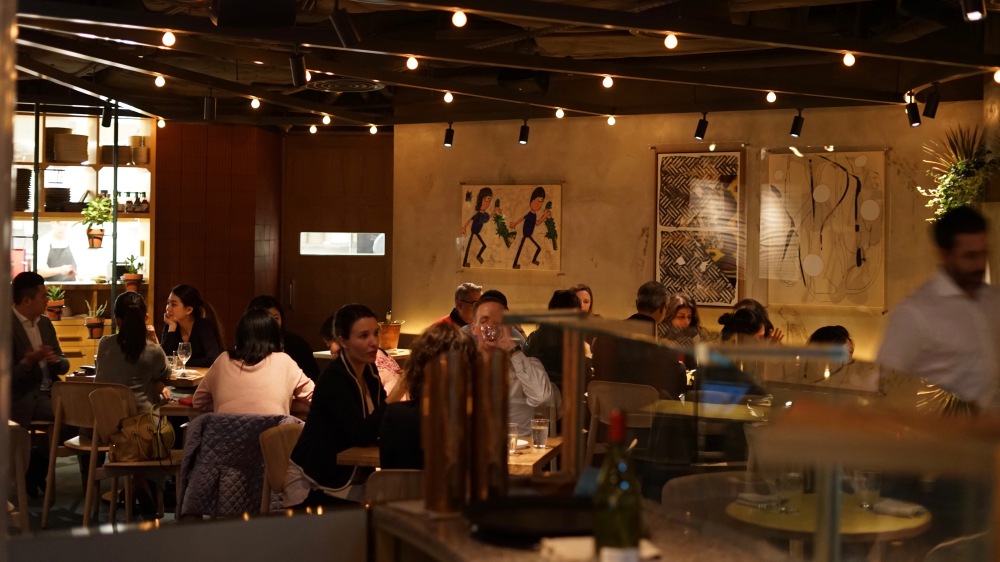 Once seated, we were given a run down of the menu, which had a hodgepodge of styles that were broadly recognisable as Southern American.  Listed as Snacks, Starter, Sides and Mains, the menu was more suited to individual dining; moving away from the share dining trend that has dominated menus for the longest time.

Ironically, feeling in a sharing mood, we opted to grab a selection of menu options and buck the recommendation of individual dining.

A trio of deviled eggs appeared, the rustic looking dish given a little bit of a refresh and modern look with the addition of of salmon roe.  There was a strong hint of mustard that, while not overly hot, provided a good hit to the back of palate.  The addition of the roe was a nice touch that gave just enough salty flavour to help balance out the punch of the mustard. 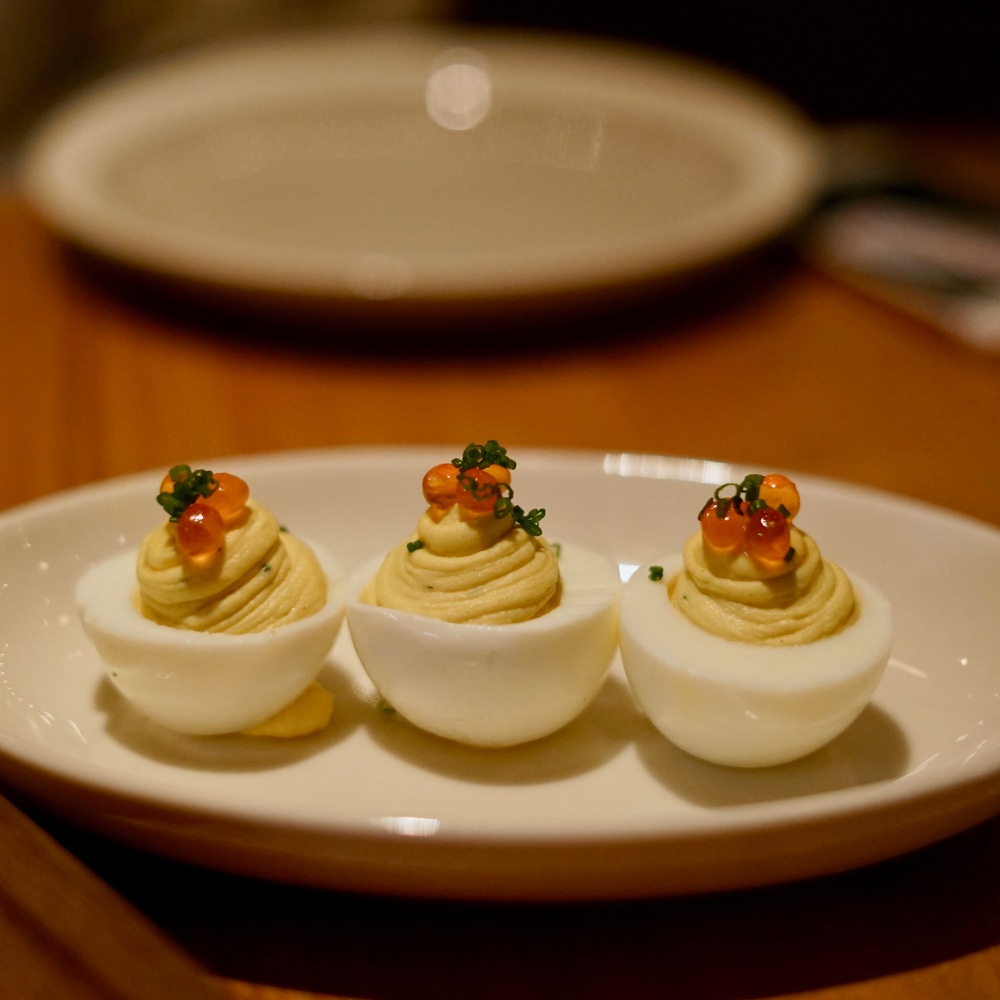 There was no shortage of a salty hit with the next starter; the sardines on toast was intensely flavoured, combining a tomato paste and pickled onion with the strong flavour of the sardines.  I’m a huge fan of sardines, so I quite liked the dish, but I think I would have loved a little more of the salty and oily fish on the toast; to really give it a little ‘oomph’. 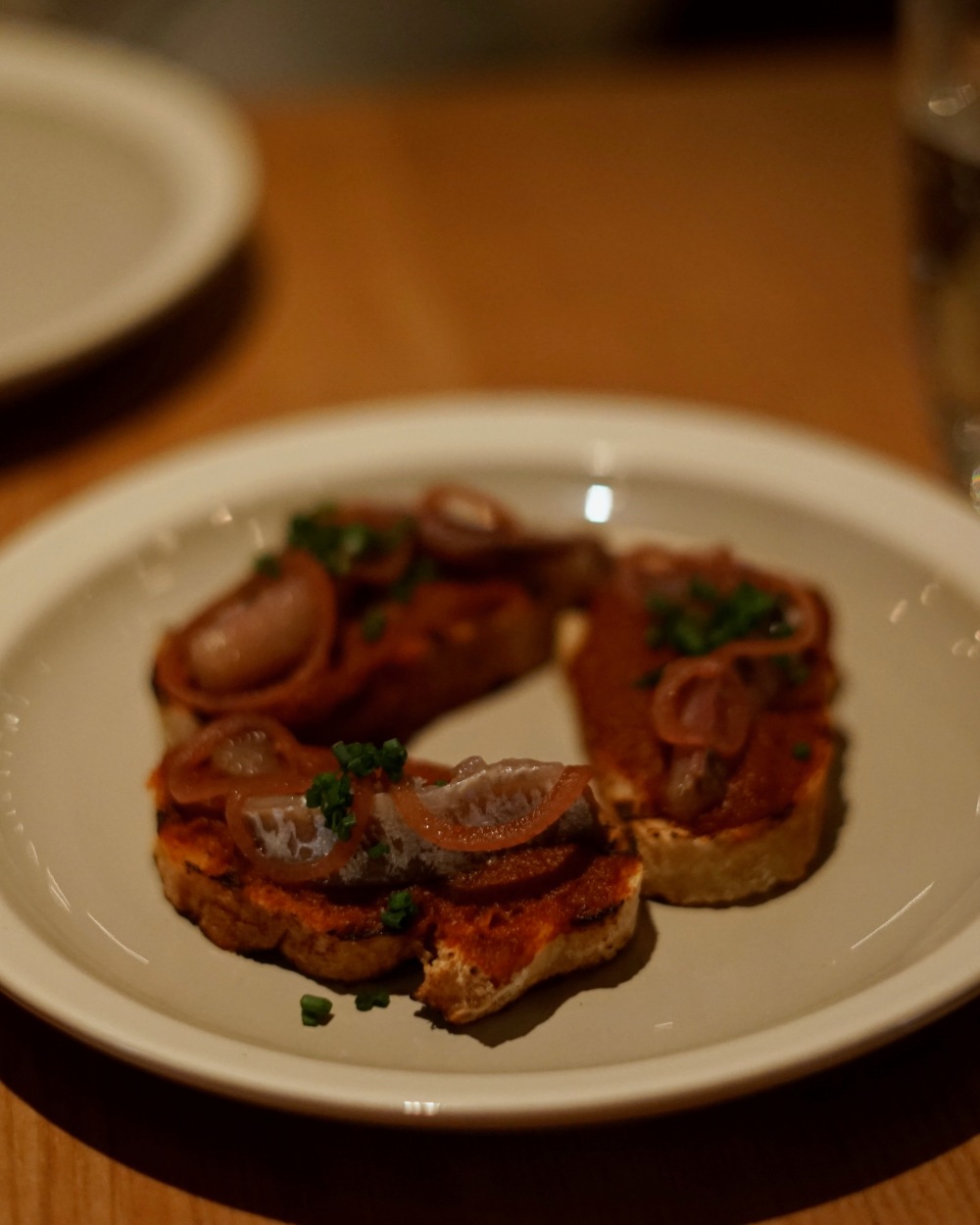 Perhaps my favourite dish of the night, the pickled prawn with fennel and red onions, came next.  The rustic looking dish involved getting your hands a little dirty and stuffing the prawn mix into the lettuce cups provided; then stuffing them in your gob!  One of the specialties at Commissary, the home pickling process had transformed some common ingredients into something special.  The prawns were just superb and quite more(ish), and I found myself returning to the dish, even as other plates piled up at our table. 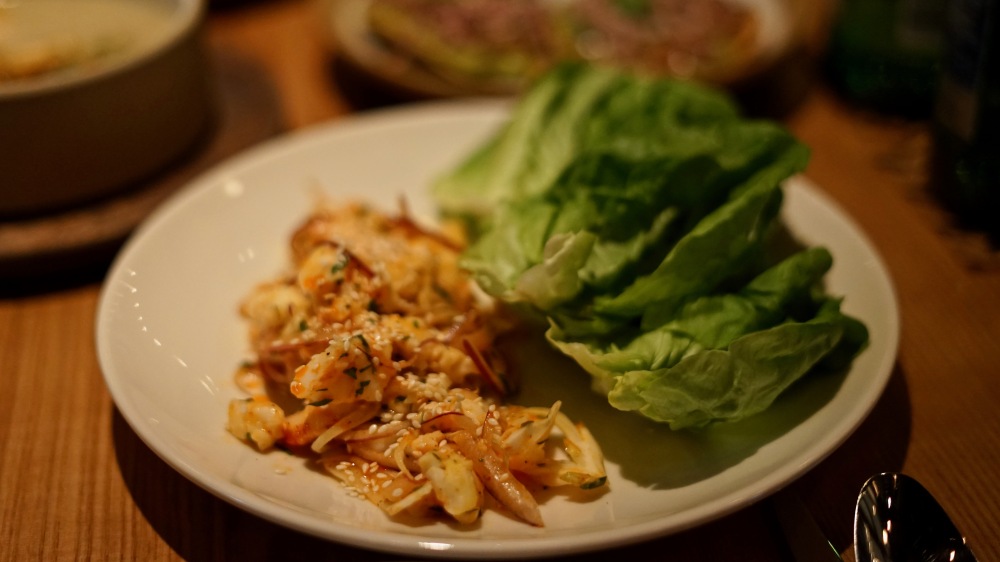 Another absolute winner was the blending of fresh tuna and guacamole with red onion.  The tuna tostada was incredibly messy to eat, the only real way of devouring was picking the lot up with your hands and stuffing it in your mouth.  The sweet freshness of the tuna working nicely with the creamy avocado and slightly acidic bite of the red onion. The dish had it all, sweet with sour and crunch from the tostada; it had a real Mexican feel. 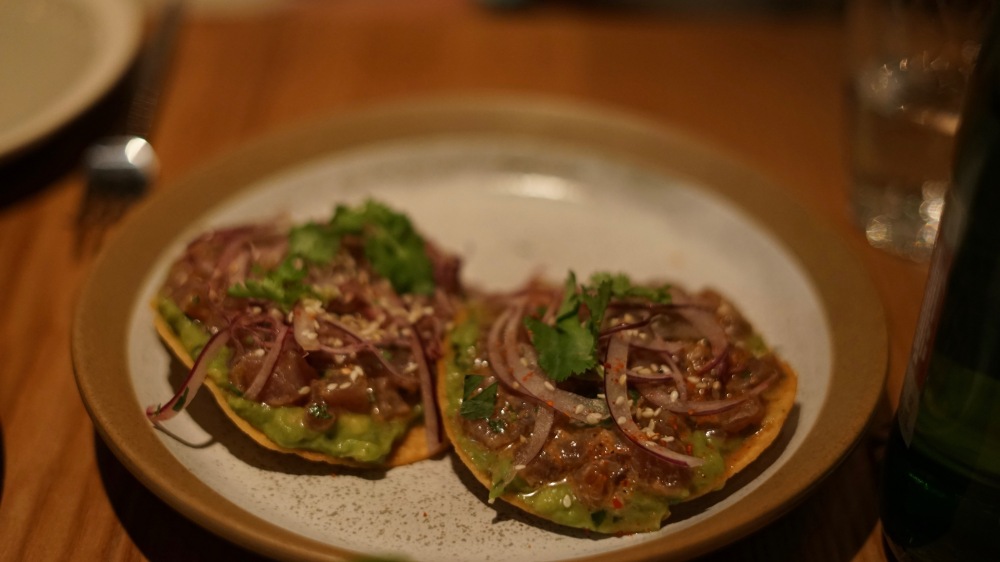 There were floaty bits of potato crisps in the Clam Chowder, which was beautiful and creamy and filled with slightly chewy Cloudy Bay diamond clams.  The potato crisps were an interesting addition, which I though I wouldn’t like (not a fan of soggy crips) but they really helped to add some salt and texture to the chowder.  I found the chowder to be a little thinner than I expected, so the crisps helped solve that problem.  There were heaps of little clams to munch on too, but it was a huge serving and we couldn’t finish it off  before the next pile of food arrived. 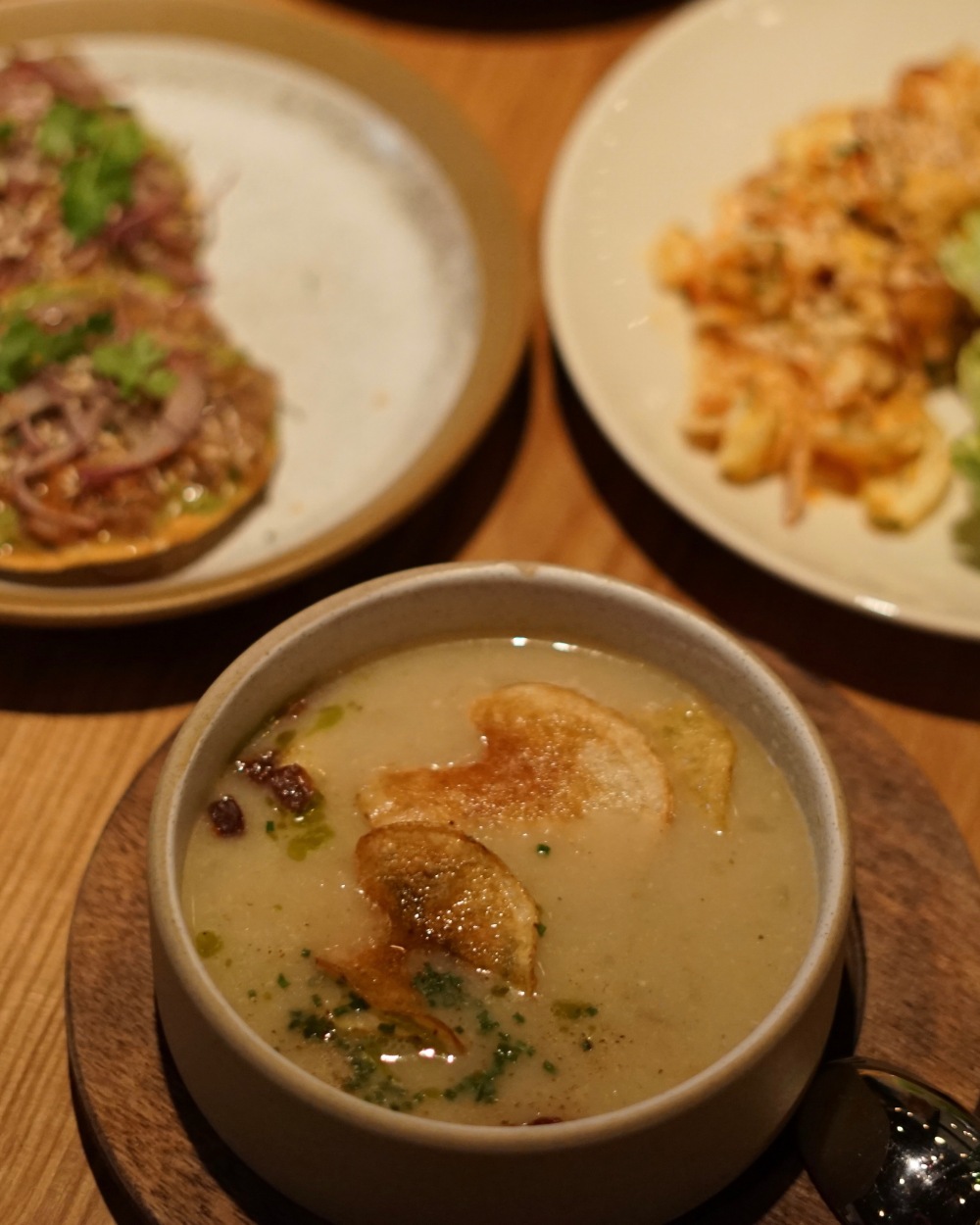 Normally served in a massive bowl, we were saved the embarrassment of trying to spoon the shrimp and grits into individual bowls ourselves; the team at Commissary giving us all pre-filled bowls.  I don’t mind telling you that I was starting to understand the concept of the restaurant; big flavours and even bigger servings!  Huge, expertly cooked prawns were mixed in with the grits, which were a lot more blended and smooth in comparison to what I was expecting.  I really loved the soupy sauce that came with the grits, it was smooth and sweet, and helping to bring the grits and prawns together were some stewed tomato chunks. 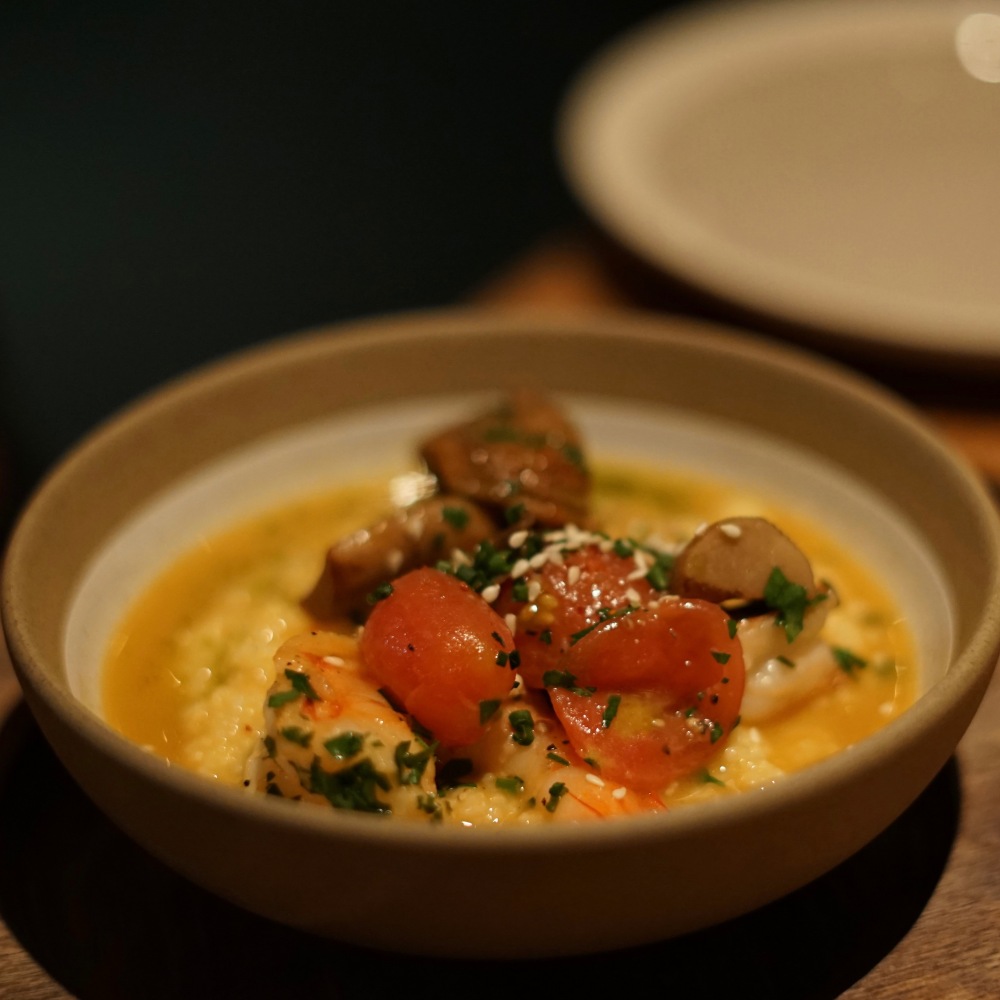 I was feeling quite full by the time the fish tacos arrived; the very rustic looking tacos had some deep fried fish that was just a little bit too spicy for my palate.  The soft taco shells easily wrapped the spicy coleslaw, but it was still messy eating; thankfully I managed to keep most of the tacos in my mouth and not over my clothing! 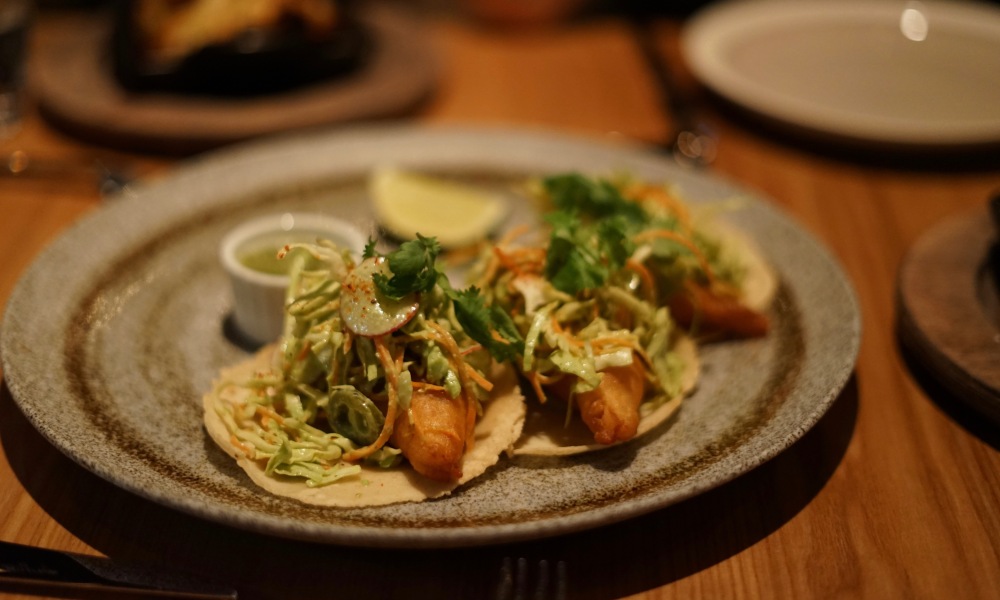 In keeping with the huge serving sizes, our dessert options were massive too; huge portion sizes and big flavours.  None bigger in size than the Red Velvet cake.  Looking spectacular on its plate, the red velvet layer cake mixed perfectly moist sponge with cream cheese frosting to provided the best version of the well known cake I’d ever had. 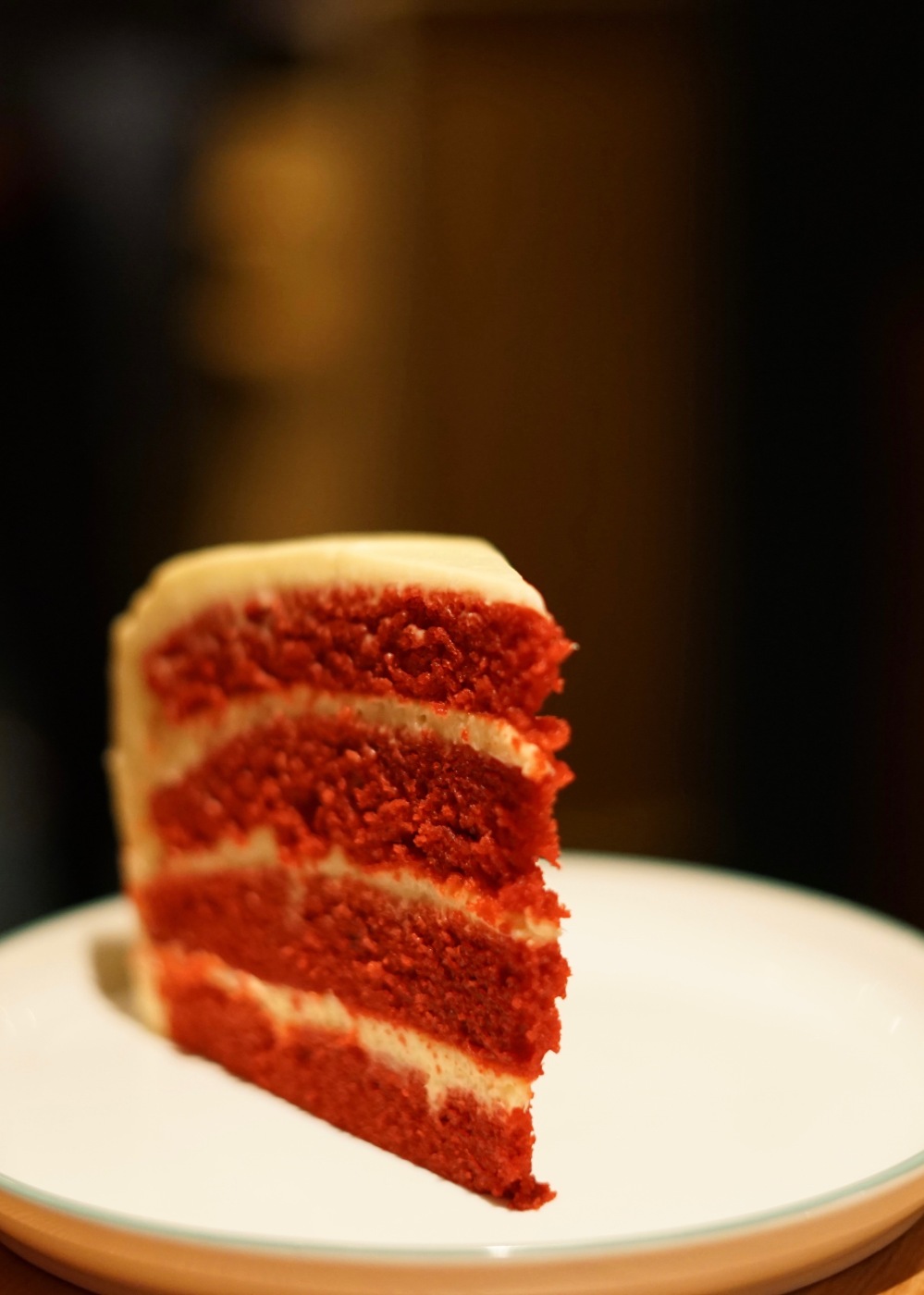 There was a lot to like about Commissary – even though the place had only been open a few days, it was packed already.  The relaxed al fresco dining area out front was filled with well dressed business folk enjoying a cold beer or two; the dining area inside was packed with an eclectic group of diners that were equally as interested in finding out what the whole SoCal dining experience was all about.

One word of warning though; the food at Commissary is very comforting, very homey and very filling.  With serving sizes that are generous (to say the least) and quite reasonable prices, there’d be a risk of significantly over eating.  The food is surprisingly subtle with their flavours, sure, but there are some big tastes with some of the dishes, especially the fish tacos. I found the menu to be quite accessible and with plenty more options to try than I could possibly eat in one sitting.

Commissary is the latest in a line of new restaurants at Pacific Place, very much changing the dynamic of the area.  It seems that PP is now rapidly becoming a foodie destination.

Lucky for me, it’s just a short walk from my apartment!

**I was a guest of Commissary for this meal 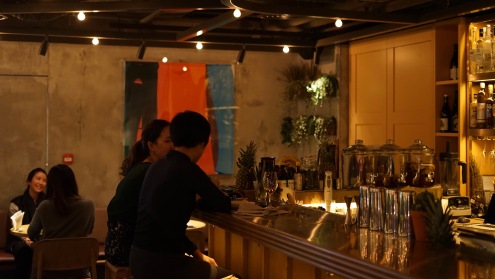 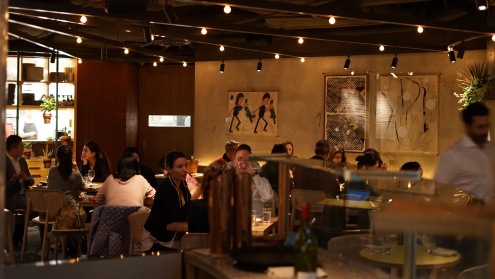 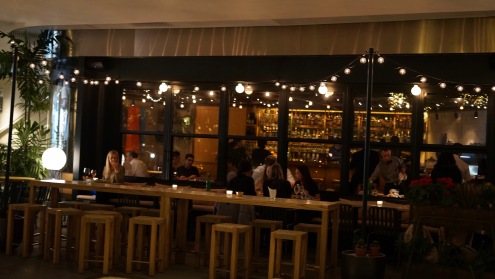 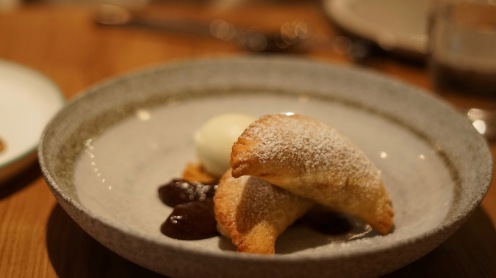 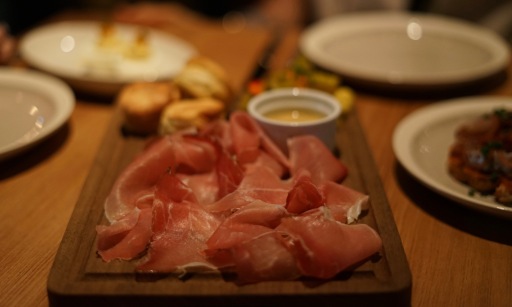 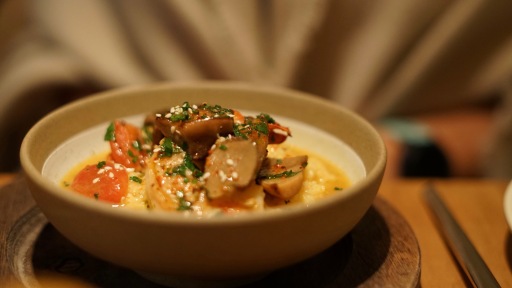 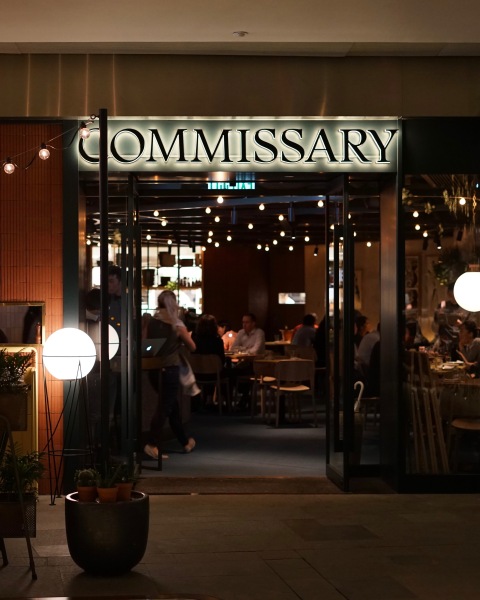 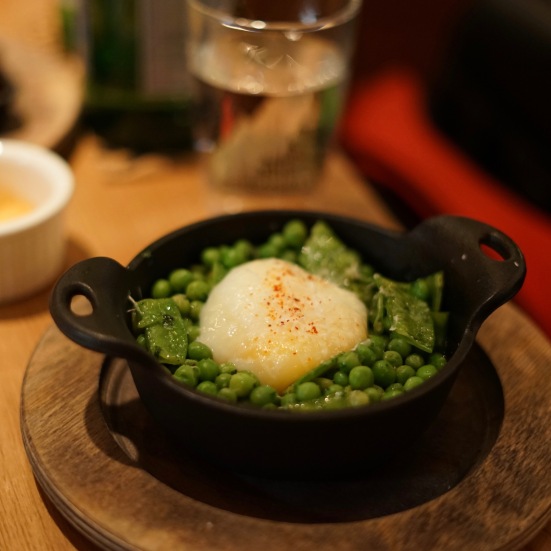 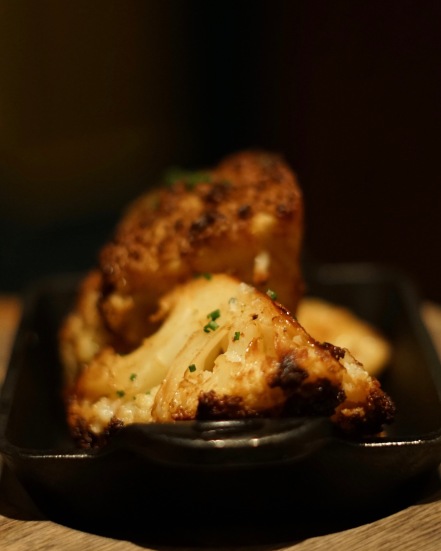