I have to say, I was pretty dubious when the girl suggested that we visit Jinjuu for our monthly lunch date.

After all, our last couple of ‘long lunches’ had been at Michelin starred restaurants.

I had no real reason to be suspect about the Korean fusion joint, the girl had recently been with workmates and was really keen to get my thoughts about the food.  Now, I’m not saying that I don’t trust the girl’s judgement when it comes to food, it’s just that I couldn’t see a place called Jinjuu floating my boat.

Then there was the fact that it was in LKF.

A fact that had me completely confused when I initially tried to find Jinjuu in it’s listed address of the California Tower – a spot that I know well.  Jinjuu is ‘technically’ in the California Tower, but in reality is on street level, just around the corner from the tower’s main entrance.

As I walked into the Judy Joo owned restaurant, I was very much reminded of the fact that LKF is Hong Kong’s party district.  On one side of the entrance was your typical counter gracing restaurant entrances worldwide, and on the other was a DJ booth, with electronic decks at the ready for the setting of the sun and presumably the transformation of Jinjuu from restaurant to hip bar.

It was quiet at midday on a Wednesday afternoon and we had our pick of tables, and were given some menus that outlined both the lunchtime set and the normal a la carte options.  The menu was surprising, encompassing both traditional and contemporary Korean fare that included both bar snacks and more substantial options.

I liked what I saw!  There were way more options than we could possibly have chosen in one sitting, but took the recommendation of our waiter on some ‘classic’ dishes, as well as some items that particularly caught my eye.

First out was an interesting looking version of a tuna tatar.  Sustainable Pacific tuna was mixed with chunks of cucumber, chopped shallots and chives, then finished with a mustard vinaigrette. Surrounding the pile of fresh tuna were lotus root crisps, holding the mound of tuna together and having the added benefit of being useful to scoop up the tartare.  It was a colourful and very fresh way to start our meal, the tuna was high grade and quite sweet, balanced wonderfully against the slight bite of the mustard vinaigrette.

The next dish turned out to be one of those wow moments, and as soon as we’d finished eating the bulgogi beef skewers, we straight up ordered another round.  The chargrilled grass-fed Aussie beef skewers were so tender and full of flavour from the bulgogi marinade, that on their own would have been special.  But once you dipped them the kimchi béarnaise, that was so creamy and intensely flavoured, the skewers were elevated to near mystical levels.  That béarnaise was so delicious, it tasted more like melted cheese and when added to the beef; wow!

It was time for Jinjuu’s signature dish of Korean Fried Chicken, which we’d been advised by friends were ‘to-die-for’ good.  We’d ordered a mix of the thighs (boneless) and wings and when the plate was delivered, I could see why they were the restaurant’s signature dish.  Free-range Aussie chicken was hidden under a golden coating that was incredibly inviting.  It was a plate of food that screamed out ‘eat me, eat me now!’ – so that’s exactly what I did.  The golden coating was light and oil free, locking in a slightly sweet and very moist chicken flesh.  I particularly loved the thigh, mainly because of that chicken – a little squirt of the Junjuu black soy sauce added a nice punchy contrast. 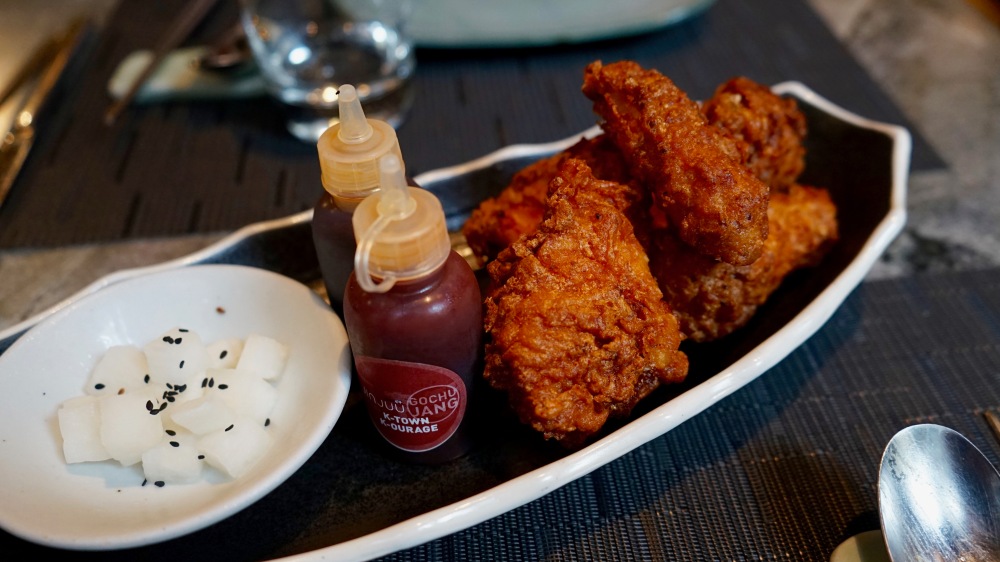 However, I didn’t particularly like the wings, they were too hard to eat and really lacked that strong chicken flavour that was present in the thighs; the next time I’d just stick to the thighs.

For me, the only ‘miss’ for the whole meal was the tuna tacos, which were more of that lovely raw sustainable Pacific tuna that had been in the tartare.  It was weird right, the dish had practically the same ingredients as our lovely starting dish, but the addition of chopped baby gem lettuce, jalapeño and avocado completely changed the complexion of the dish and I didn’t like it.  It didn’t help that the taco ‘soft-shell’ was a little pasty and difficult to swallow.  I guess I’d been expecting something a little more refined (like these amazing fish tacos from Gogyo)

Our last savoury bite brought us back on track, the very cute and so, so tiny bulgogi wagyu beef sliders were totally yummo!  The beef had been infused with the lovely Korean bulgogi spices and then topped with slices of cucumber kimchi and melted cheddar, before being topped with crispy bacon.  The sliders were barely two bites, and two quick bites at that, but I really did love them, the balance of beef and cheese being just right.

It was dessert time and we each chose a very different option!

I’d gone for the strawberry mess, thinking it would be something like an Eton Mess (one of my favourite desserts from the UK).  It kind of was, but mostly wasn’t.  Served in a glass, it had many of the components of an Eton Mess, such as the chantilly cream and meringue, but the composition was quite different with the addition of the strawberry compote and a big scoop of strawberry sorbet sitting on top.  It was nice and refreshing on a hot day, the strawberry sorbet hitting the spot, but I found it quite difficult to eat in the glass – so while it looked nice, it was not very practical.

The girl’s dessert of fried apple mandoo pie certainly reminded of a McDonalds apple pie in that the two little quadrants of apple pie were served in a cylindrical paper container and needed to be pulled out to be dipped in the cinnamon sugar and maple yoghurt dip.  The big difference was the container was a wild and colourful dragon consuming the delights contained within.  Oh, and they were tasty too, the short pastry holding steaming pieces of stewed apple that were very more(ish), especially when dipped in the dip.  So quick did the girl inhale her apple pies that I thought there were only two pieces there – but in fact there were three!

Jinjuu has a rough translation to “Pearl” and it’s fair to say that the restaurant is a pearl in the throngs of Lan Kwai Fong.

Owner Judy Joo is pretty well known in her native America, with a number of successful books, cooking and travel shows – “Korean Food Made Simple” the most popular.  Originally a banker selling derivatives at Morgan Stanly, Joo saw the light and joined the French Culinary Institute before working at Three Michelin starred Restaurant Gordon Ramsey.

With two Jinjuu restaurants, one in London and one in Hong Kong, Chef Joo is on a mission to bring contemporary Korean cooking to the mainstream.

I can’t talk about the London version, but I really enjoyed my visit to Jinjuu, and with the exception of the fish tacos, thought the food was quite unlike any Korean food I’d consumed before (admittedly, mainly made up of Korean BBQ).  Service was friendly and attentive, with one particular waiter only too happy to pose for some of my post lunch photos.

The interior of the restaurant had lots of Asian art, with one wall dominated by a dragon, flying towards the open style kitchen; much like the dragon on the apple pie casing.  There was a slightly grungy feel to the restaurant though, a feeling that it wouldn’t take much for the lights to go down and some funky beats to come blaring from the speaker.

I may have entered Jinjuu a little dubious, but by the time I left, I was a convert!