It seems to be list season; the 2017 Hong Kong & Macau Michelin guide was just released, as was the Tatler Top 20.  Just two of the many restaurant guides and lists that are available in HK, they’re probably two of the main guides I use when looking for a lovely dining experience;  the other being the Top 100 Tables.

The week before the Tatler Top 20 was announced, I visited a cool little restaurant at Sai Ying Pun called the Fish School.  It was good, really good in fact; which is why I wasn’t at all surprised to see the Fish School achieve its first significant award by placing at #7 on the list (see full list here).

The intimate little restaurant is part of the JIA group, which runs some of the city’s best restaurants, including two Michelin star Duddle’s as well as some of my favourite restaurants around town (Rhoda and Aberdeen Street Social, to name a few).  With only 5o seats available in the restaurant that’s tucked away out of sight in up-and-coming Sai Ying Pun, Fish School can be a little hard to get into, so we decided to visit on (what we thought would be) a quiet Sunday evening.

The first thing I noticed when walking down the alley that led us to Fish School was that it was a little easer to find that I’d been led to believe; with a little neon sign pointing the way.  Walking into the joint, the subdued lighting and poured concrete floors gave a semi industrial feel; aided by the open kitchen and fish tanks containing live produce.  We were seated at the bar, which gave me a great view of the small team of chefs as they prepared the evening’s tasty looking dishes. 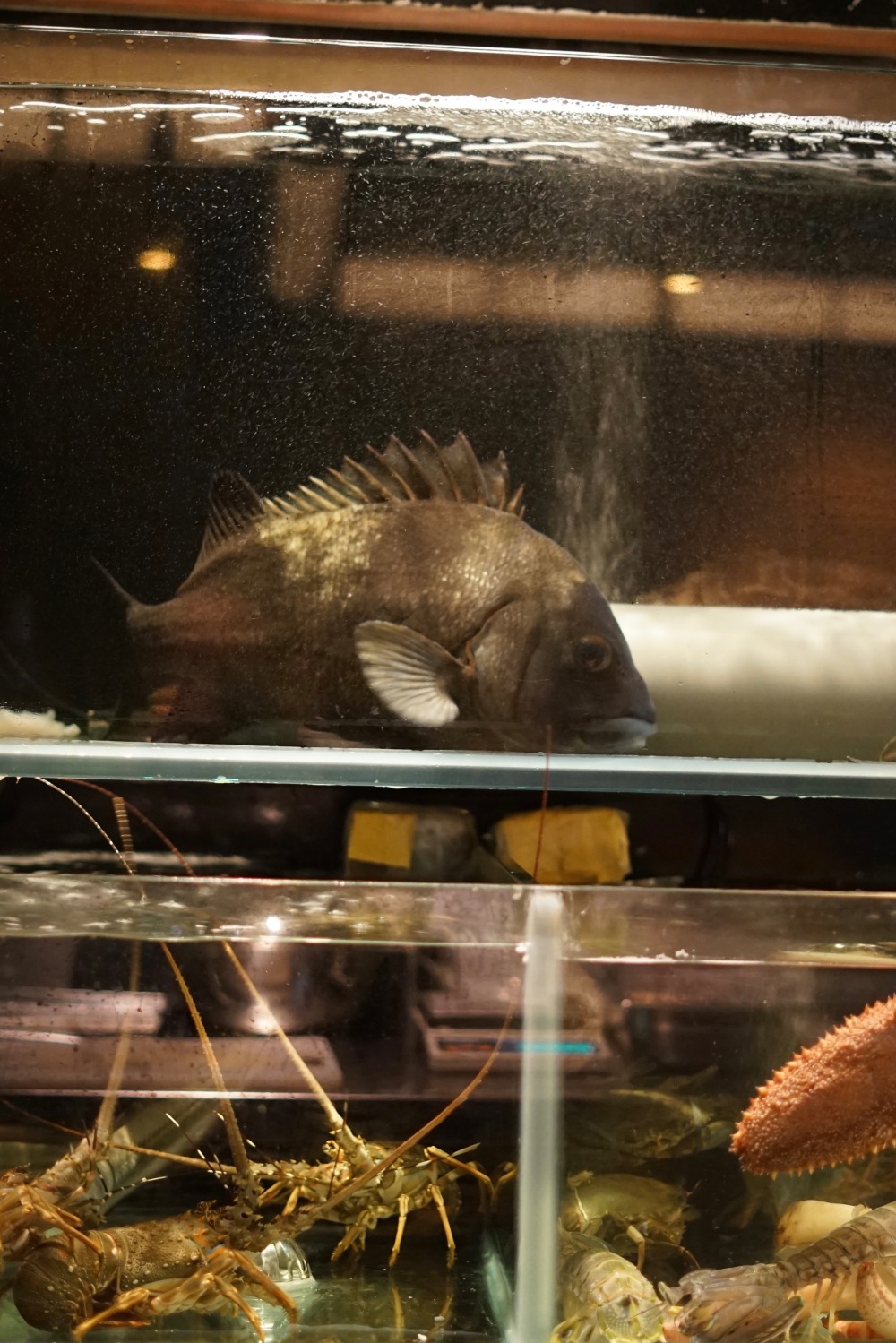 Placemats doubled as menus, and a quick flip over revealed the short but interesting array of options that ranged from ‘chargrilled’, ‘cold’ and ‘hot’, as well as a couple of Fish School specialties.  The restaurant’s mission was also boldly noted, proclaiming Chef David Lai’s philosophy of introducing unprocessed natural foods into the modern diet; accessing fresh fish from small, family-owned fishing boats and seasonal ingredients sourced from nearby farms grown specially for Chef Lai.

No easy feat given that 90% of the food in Hong Kong is imported!

As we contemplated what we would order, our waiter for the evening came over and explained the menu; smaller share plates to start and a large share plate for main, then proceeded to make some recommendations for the night.  Coincidentally, most of the items we’d been eyeing off were on the recommended list, but not all; we decided to go with our gut on a few but mostly ran with the recommendations. 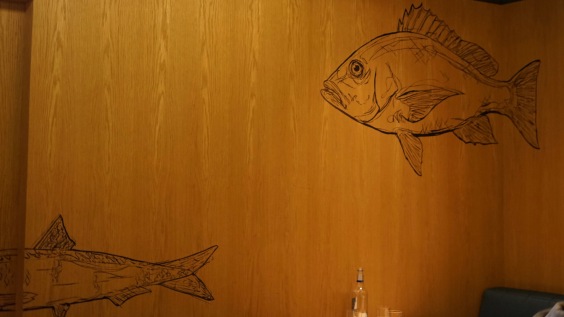 Deviating a little from the script, we started the meal with some Padron Peppers; you know the ones, very sweet and delicious Spanish green peppers that produce a super hot pepper every now and then.  I love them, it’s like a little lottery, ‘will this be the hot one’ asked every time you pop one in your mouth.  Fish School had treated the peppers well, a little bit of olive oil and an appropriate pinch of sea salt combined to provide a slightly caramelised crust that was sweet and salty at the same time.  Thankfully, no hot ones this time, but the anticipation was half the fun.

The highlight of the meal was up next; the Lobster Popcorn looked wonderful, the crispy golden coating had lots of texture which looked a little dazzling in the low light; a lemon and honey sticky sauce drizzled over the crunchy popcorn with pools of the sticky stuff on the plate to dip the sweet lobster in before devouring.  The deep fried lobster was beautiful and tender, expertly cooked and perfectly at home with that golden coating and the sauce. The sweetness of the lobster remained on the palate, while the sweet sauce simply added to the taste sensation.  Sadly, before we knew it, the plate was clean and we were left wondering how it had happened so quickly! 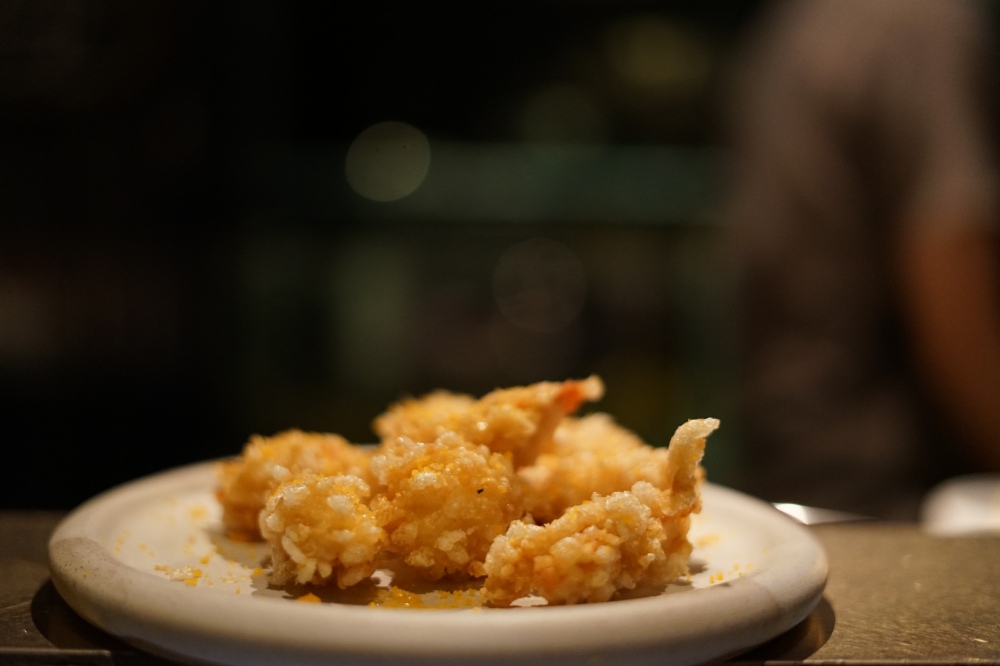 I watched as one of the chefs prepared our Octopus and Prawn Ceviche, the components coming together slowly at first and then with a rush as the final ingredients were added.  The acidic sauce had done its task brilliantly, with the combination of prawns and octopus working well; the slightly chewy octopus providing extra texture and the soft sweet prawn flesh the punch flavour.  A light coating of paprika added colour to the plate, but not much by the way of flavour, but the thinly sliced onion worked well with the fresh seafood and balanced out the astringent lemon pooling at the bottom of the shallow bowl.

We’d taken the suggestion of trying the Razor Clams from the Chargrill part of the menu; four large clams were grilled and presented on a typical silver seafood tray.  Coated in a salsa verde, the clams looked quite appetising.  But, they were really difficult to eat, the shells had become brittle in the grilling process and cracked as we tried to get to the sweet flesh, leaving a bit of a gritty taste in the mouth.  The sweet clam meat was nice, especially against the slight bite of the salsa, but I’d probably not order them again; too much effort! 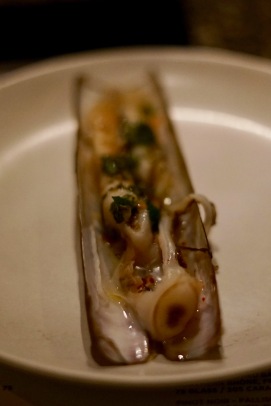 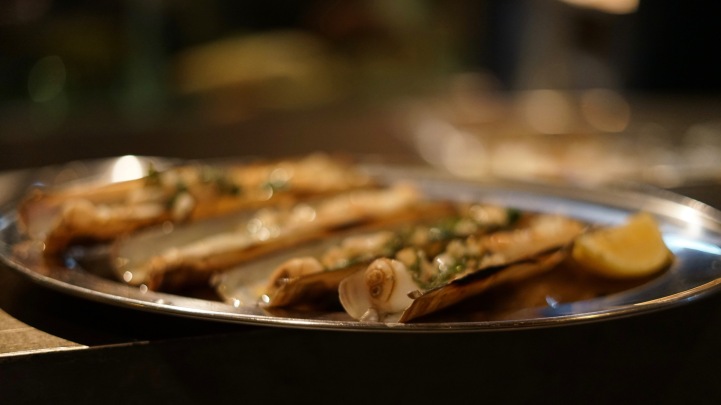 We’d taken a punt on the spanner crab tagliatelle, pasta in a seafood restaurant can be a bit hit and miss.  The Fish School version was a little of both.  The tagliatelle was expertly cooked and there was plenty of soft sweet spanner crab in the dish; in fact, the sweet crab flesh was a real highlight.  We found the sauce to be a tad cloying and a bit too thick to be truely enjoyable; a lighter sauce would have been a welcome change to the dish, taking it from a heavy dish to a much lighter version.  The slightly burnt butter taste of the sauce could have been so much better with just a little restraint.

It was time for our main, and while there had been some exceptional looking local fish on the menu, we’d decided to go for gold and ordered the Dover Sole Meuniere; mainly because it’s a great test of a seafood restaurant’s ability to cook fish!  The large Dover Sole was presented on a large silver platter, with the burnt butter sauce in which the fish was cooked covering the dish, as well as some capers and croutons. 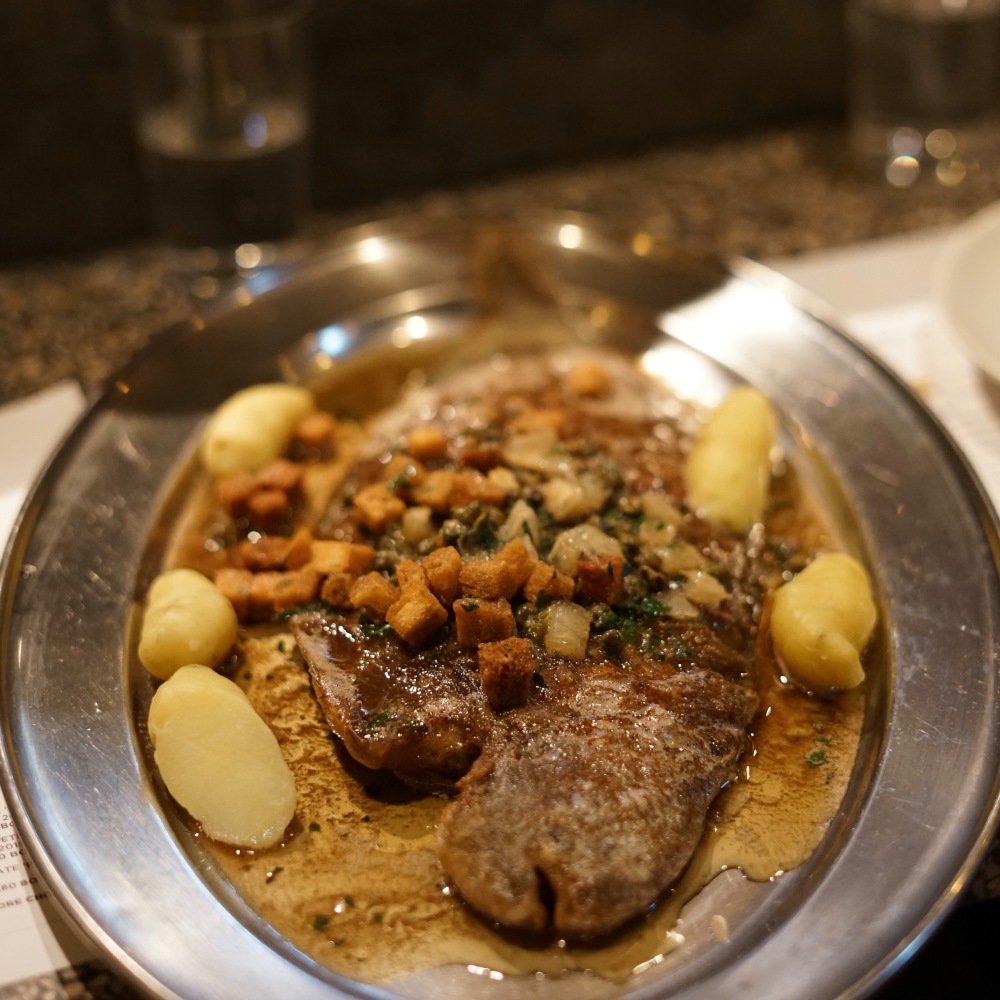 If a Sole Meuniere is cooked poorly, it’s incredibly difficult to peel the flesh away from the bones, and it becomes a pretty horrible experience!  We had no such trouble with our Fish School version, the fish was cooked to perfection and the sturdy flesh peeled away with ease.  Quite a strong flavoured fish, the burnt butter of the Meuniere and the crunch of the croutons paired wonderfully to balance the dish.  I loved the texture and flavours and as we finished the fish, I couldn’t help wonder if I’d just consumed the best version of the  classic French dish; it certainly compared favourably with the best we’d had on one of our Paris trips.

The girl was quite full, so decided that she’d just share my dessert, which in hindsight was a travesty!  The fig and ricotta dessert was served with a walnut puree and pieces of fresh honeycomb; and was a revelation.  Fresh fig dotted the plate, then covered with a light and snow like layer of the ricotta; the freshness of the fig was a joy on the palate, but the combination of the ever-so-slightly-salty ricotta and the very intensely sweet honeycomb was a real winner.  So light, so refreshing and more importantly, so yummy; I really didn’t want to share the dish and in retrospect, we should have ordered two. 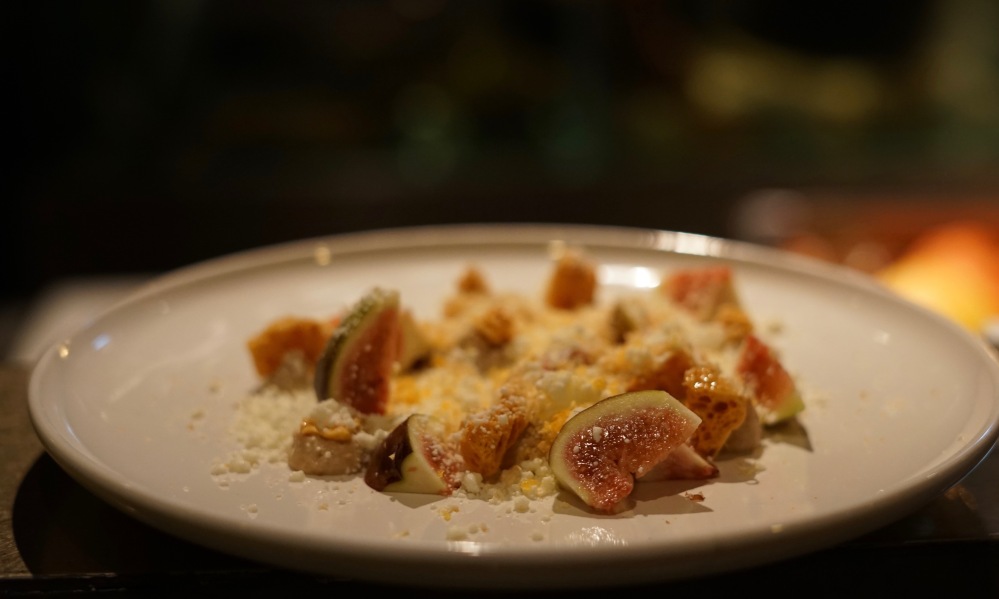 As we’d been consuming our meal, the 5o seat dining room had filled to capacity, which was great to see on a Sunday night; even more surprising was the turnover of tables, once one set of diners left, shortly after another would replace them.  It was a testament to how well the restaurant was doing, and ultimately, that popularity, along with the quality of the food led to the current recognition as a Tatler #top20restaurant. 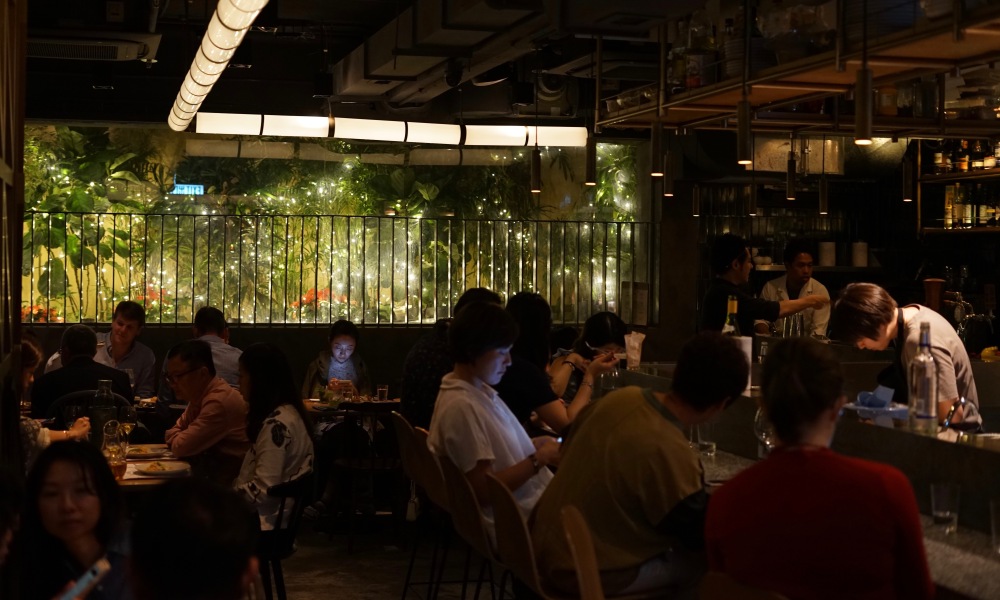 While the Culinary Director of Fish School is chef David Lai, day to day running of the kitchen fell to Executive Chef Chris Ma, who did a fantastic job of running the kitchen.  Service was excellent throughout the night, our water was topped up regularly and our food was delivered with good pacing; we never felt like we were sitting too long between courses, nor did the food come out so fast that we felt rushed.

There was a lot to love about Fish School, and sure, there were a couple of dishes that weren’t perfect; the tagliatelle could have been a little more refined and the razor clams a little crisper, but the food really hit the mark.  I mean, that popcorn lobster was one of the more spectacular (and simple) dishes we’d had in a while.  Even worth a special visit just to eat a whole bucket load!  The main of Dover Sole was superb and the dessert something to remember.

Actually, I’m already planning a quick return visit; I want some more of that lobster popcorn and I want it now!

**I was a guest of JIA Group for this meal; but all views are personal and mine!