I’m always on the lookout for a great burger.

When you think of the Food Pyramid, then a burger has got all the bases covered; mind you, the proportion of fats and meat might be a little on the excessive side 🙂

I’d been hearing a lot about a new burger joint over at Sai Ying Pun for quite a while, Electric Avenue; the buzz had been really positive, as had their Social Media campaign.  In fact, the crew at the had been so active on Social Media, that they’d actively engaged in a post.

Feeling particularly hungry one Saturday, we decided to get along and check out Electric Avenue, which was only a few MTR stations away from our home base.  It didn’t take us long to arrive at Electric Avenue, but as we walked along First Steet, I was reminded about how far Sai Ying Pun had progressed since I’d landed in Hong Kong.  There were new cafes, lots more street art and just a general feeling that SYP was a totally happening place.

Electric Avenue was pretty easy to find, with a very cool wall mural that very much represented the kitsch factor that represented the area.  What surprised me was how small the burger joint was; taking up a tiny little corner shop with about 4 tables inside, it immediately felt cramped.  We managed to snag the last table, and believe me, it was very squishy; when people at the table next to us moved, we were jostled and the stool seating left very little space for manoeuvring. 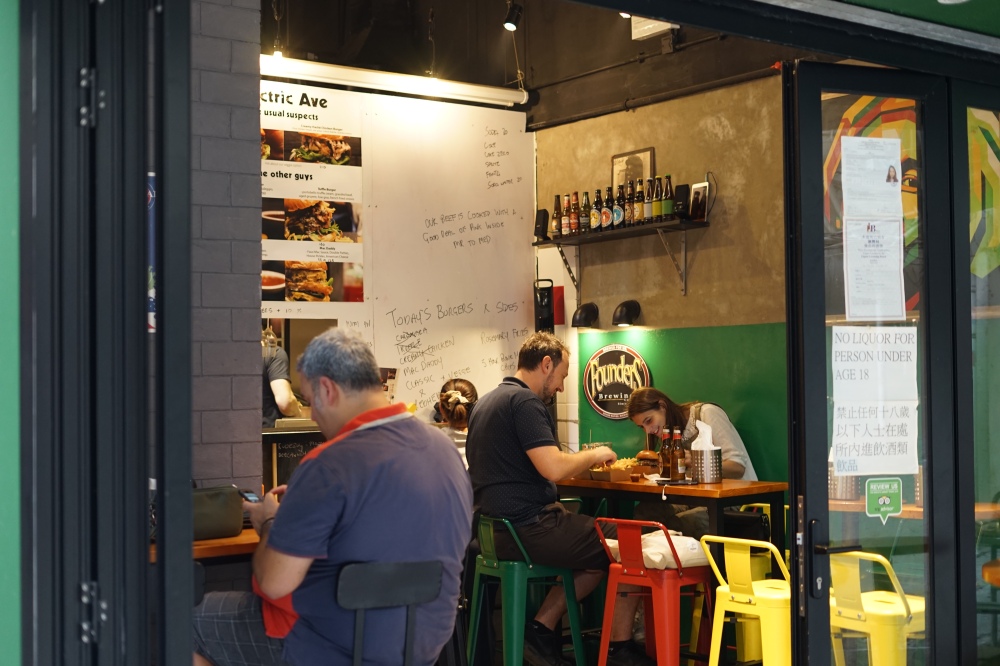 As with the tiny dining area, the kitchen was equally tiny; with room for the chef and waitress only (and really not too much room for the waitress either).  Looking over the menu, which was placed above the kitchen, resplendent with photos of the little joint’s produce, we were told that only a couple of the burgers on the menu were available.  A minor annoyance, but with a good enough selection left that we both were able to order the burgers we wanted.

We settled in to wait for our food, which took a little longer to be delivered that your ordinary burger joint.  Now, if I was in a rush, it might have been annoying, but what we noticed was that the chef/owner of Electric Avenue was taking considerable care with making the burgers.  Essentially one order at a time.

By the time it was our turn and our food arrived, the massive burgers were presented in cardboard holders that had our rosemary chips on one side and the fully stacked burgers on the other.  And when I say fully stacked, I mean that the burgers were monster sized.

There was very little to tell apart from our burgers, I’d chosen the classic with cheddar cheese and the girl had chosen the MacDaddy; both came with double patties made from 100% grass-fed Australian Angus beef and the buns were supplied by Gregoire Michaud of Bread Elements.  It seemed as if the big difference between our burgers was the addition of house pickles/onion and American Cheese (as opposed to cheddar), along iwth the fake Bic Mac sauce, which was really not that overpowering. 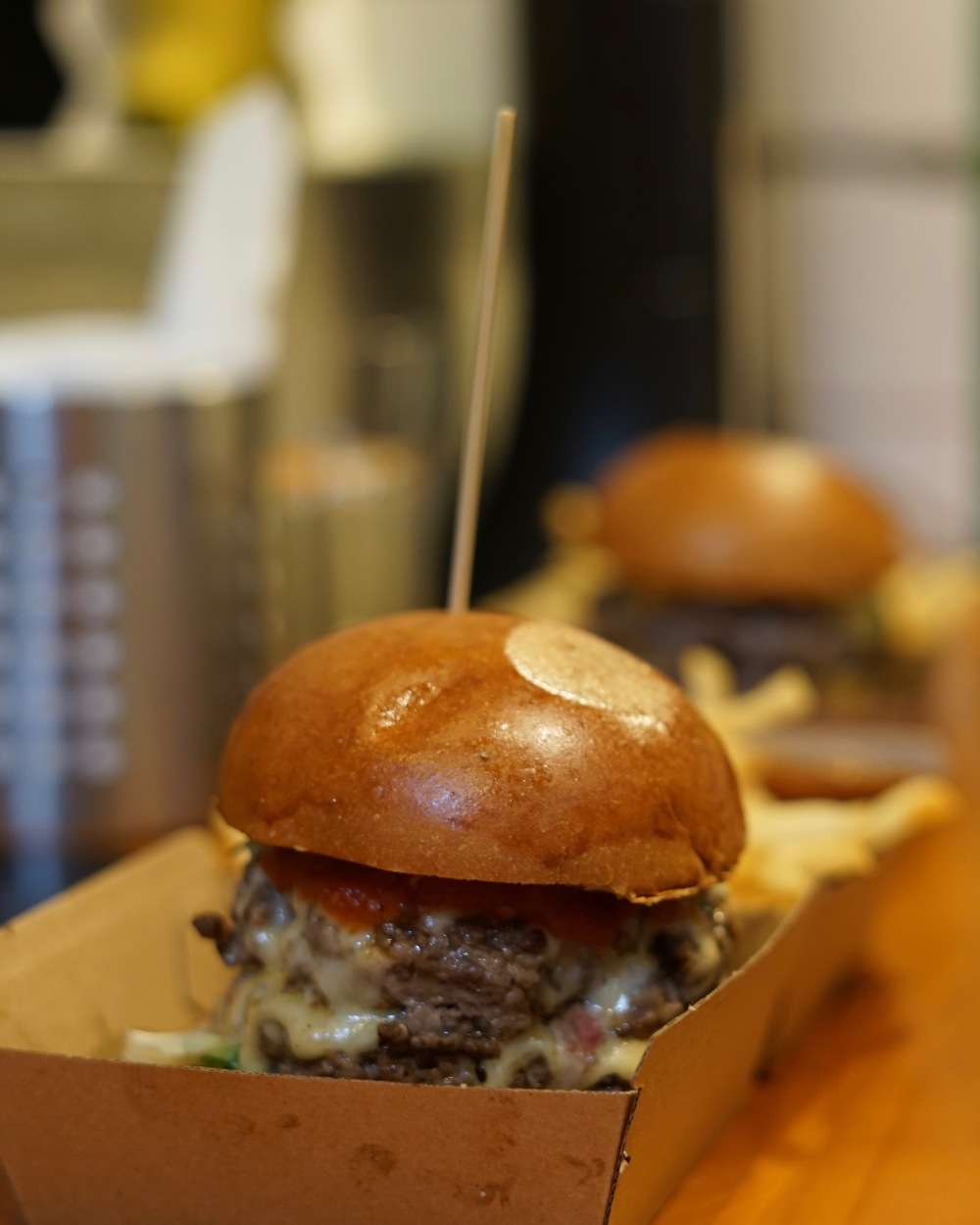 One of the things that we were expecting from our burgers was a lovely pink hue that signified a perfect medium; however, when we chomped into our burgers, both had meat that was well done.  Ordinarily, this would be a massive problem for me, but even though there was no pink, the meat was incredibly juicy and so, so tender.  There was a decent hit of seasoning that included a liberal hit of pepper, so the burgers were delicious. 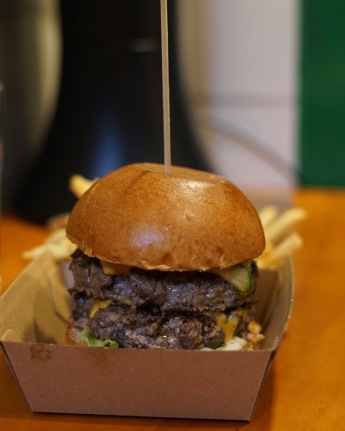 However, I can’t help think that some of that wonderful sweet flavour that you get from perfectly cooked medium rare beef can provide.

There were two types of fries available from Electric Avenue, and we inadvertently both ordered the Rosemary fries; of which I wasn’t a huge fan.  They were just bog standard and very thinly cut, so by the time I’d consumed my burger, they were kind of cold.  The other type was 5-hour bone marrow chips, which I really wish I’d ordered; especially after seeing some go out to other customers!

A definite must for my next visit.

Chef and owner Andy (Mr Chin Su Burgers) named his little burger joint after a famous street in London; which is a diverse cultural hub and a foodie mecca (given I will be back in London soon, will have to check it out!)

I had a quick chat to Andy as I was fixing up my bill; the dude definitely cares about making burgers and ensuring that each burger that comes out of his kitchen looks and tastes amazing.  I really enjoyed my burger at Electric Avenue, it wasn’t perfect, but it was huge, tasty, enjoyable and would definitely be a burger that I’d be back for. 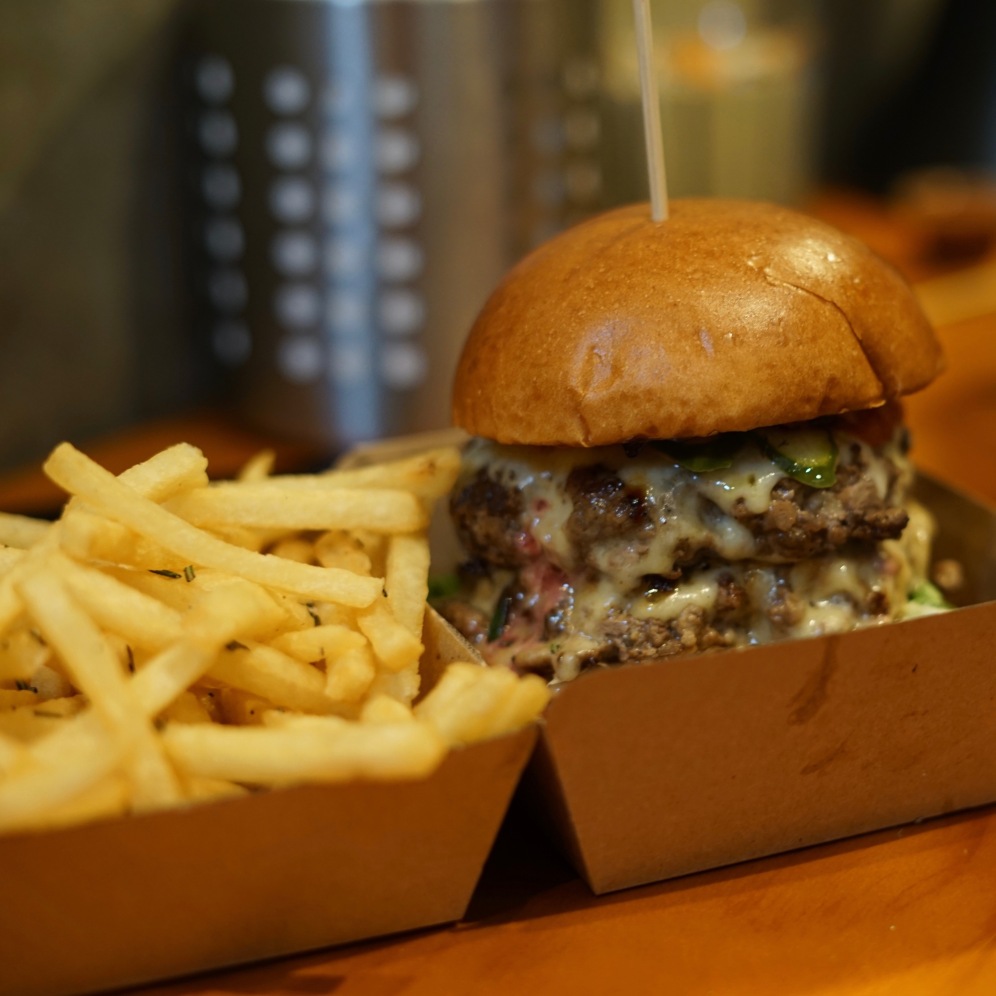