When we were planning our European vacation, it was undertaken with the knowledge that my birthday was smack bang in the middle.  It meant that I needed to select where we’d go for my birthday dinner.

Last time we were in Berlin, I had a fantastic time.  So much so, I’ve often rated it as one of my favourite cities.

It was easy then to select the #Worlds50Best Restaurant Tim Raue as that special location to celebrate another year on this planet.  I’d been looking for an opportunity to visit the world’s 48th best restaurant ever since I’d seen Chef’s Table on Netflix, the documentary providing a good insight into the somewhat controversial chef.

Life could have been very different for owner Tim Raue; growing up in Cold War Germany leaving an indelible mark, but he found his way into a kitchen.  It would partially set the course of Tim Raue’s life, but it wasn’t until a stint in Hong Kong and being indoctrinated into Asian flavours that things really started to take off.

A buddy of mine had also seen the Netflix documentary, prompting his own visit to Restaurant Tim Raue; and pretty much rave reviews of the casual fine dining restaurant.

Yeah, it was an easy choice to hit Restaurant Tim Raue.

Located right around the corner from the world famous Checkpoint Charlie, we’d picked a hotel that allowed us to walk to the restaurant for our reservation.  By the time we found the entrance, we were still a little early and the doors were not quite ready to open.  It was interesting to witness the line that formed behind us; with a good mix of accents and languages from across the world.

Ahhh, the power of the San Pellegrino World’s Top 50 Restaurant list – it essentially globalises those fortunate to be on the list. 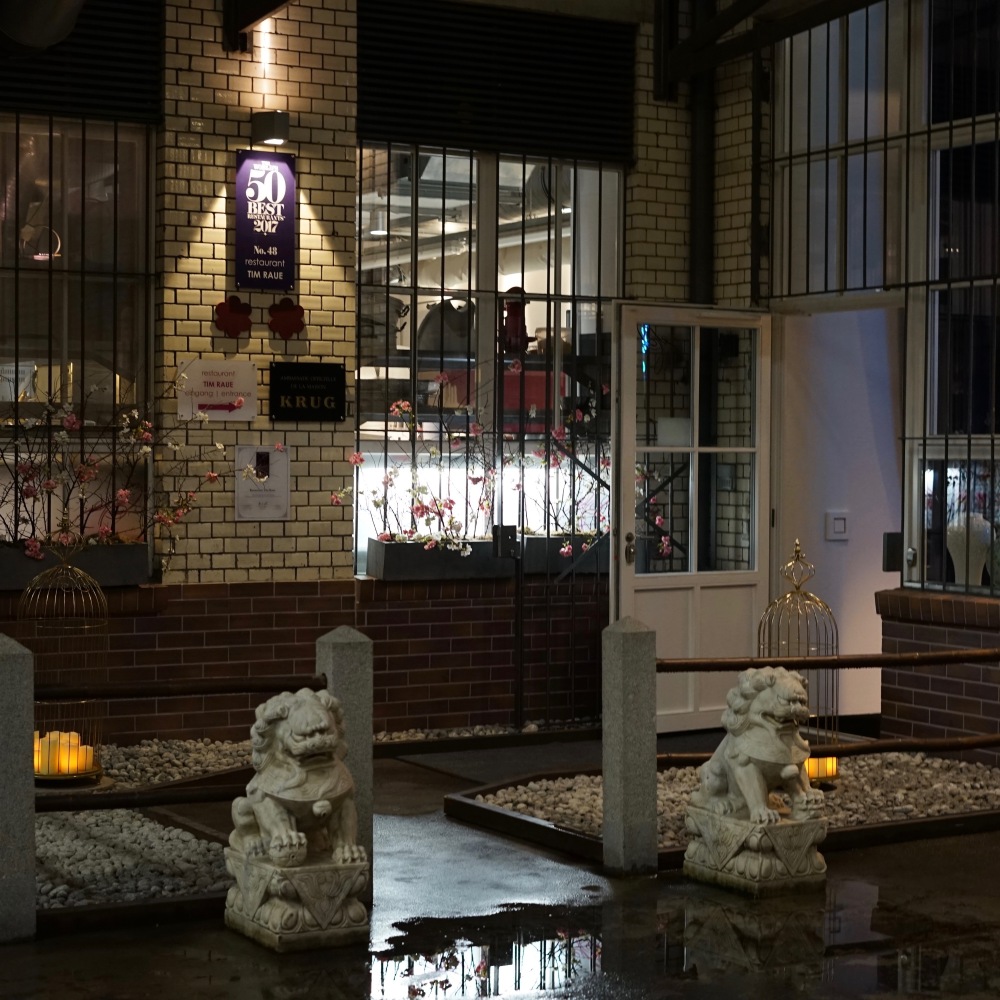 It was finally opening time, and we were led to a lovely corner table in the front part of the dining room.  I loved that there were no tablecloths or fancily dressed waitstaff; it meshed nicely with the largely informal dining room that felt very comfortable.  In fact, our seats were more like a sofa, we were very comfortable indeed.

A very friendly waiter wandered over and started to talk about menu options with us, but we’d already decided that we were going to have the eight-course tasting menu before we even arrived.  However (and quite strangely) we were advised that the signature dish of Peking Duck was not on the standard menu, although we could include it for a supplement.

We debated the merits of excluding a signature dish from the tasting menu for a bit, before deciding that we’d go for it; turning the meal into a nine-course tasting menu (a decision that would come back to haunt us!)

Our meal kicked off in a fairly traditional manner, with a heap of amuse bouche starting the meal; there were shades of Pierre Gagnier in the way that the six dishes all came out at once and pretty much dominated the table.  It was immediately clear that the theme of the night would be heavily influenced by Asian fusion cuisine.

There were influences from Thailand in the soft marshmallow pieces; Shanghai cucumber gave a short sharp hit to the back of the palate; Diakon with wasabi ensured that Japan was not left out of the mix; my favourite of the assortment of starters was the pork belly, which had a sweet ‘n sour sauce, it was delicious really – like heavenly sticky bacon bites.

A sign of things to come though was the trout, served in a bowl, there was a subtle heat that intensified shortly after consuming, leaving a burning sensation in the back of my throat.  Not unpleasant, but right on the border.

Our first course was called Imperial Caviar, the bowl containing toasted quinoa and a warm beef-tea jelly flavoured with sprat (a small fish).  There was a huge amount going on in the bowl, with a consummé that combined habanero chilli with a creme fraiche; the latter supposedly to cool down the former.  At first, I quite liked the heat from the broth, especially with the saltiness from the caviar, but as the dish progressed, the heat continued to intensify.  By the time I’d finished lapping up the broth (with a cute little pink spoon), my palate had been blown out.

After a good amount of water to clear out my palate, the next dish of Hamachi was presented, where the whole process of my palate being blown recommenced!  Expertly poached Hamachi was placed in a jade sauce that comprised of sansho pepper.  I quite liked the aesthetics of the white fish against the green sauce and accompaniments of leek, capers and green melon; but as with the Imperial Caviar, the more I consumed of the dish, the greater the heat.  Eventually, the subtle taste of the fish was gone, and I was left with an uncomfortable feeling in my mouth.

I felt like it was Groundhog Day when my mouth was again left feeling inflamed by a creeping heat in a course.  The culprit this time was green Thai chilli, which was part of the Hong Kong Gai Lan, a plum and creamy Gillardeau oyster that had been lightly poached and presented with gai lan broccoli both steamed and a puree.  Along for the ride were a fermented oyster sauce and lime tapioca…  While the dish increased in heat, it was a ginger like a flavour that really seemed to overpower the dish, which seemed to be part of the jelly under the oyster.

In what must have been an accumulated effect of the preceding heat, I was now hypersensitive to anything hot.  And, you guessed it, the next dish of Prawn included some Sichuan peppers and paprika (normally not hot) that diminished the impact of the exquisitely cooked prawns.  I loved the sweetness from the prawn flesh, that had a mild caramelisation from the cooking process.  There was an interesting contrast of the red from all of the ingredients against the plate, but it felt like there was something missing; the ingredients looking a little disconnected on the plate.

Then, as if the menu mysteriously transformed, I was spared from the heat in the next dish, which I must say was quite outstanding.  An unusual take on that most traditional of German food, pork knuckle.  The Suckling Pig consisted of super tender pork knuckles from a baby pig, separated at the table from the bone, then placed on a ‘display plate’ that was pre-made with dashi jelly and Japanese mustard. This was a hearty and robustly flavoured course, with the sweet pork delivering on every conceivable level.  The only minor issue was that there was waaaay too much of the pork knuckle, it was waaaay too delicious and I ended up eating waaaaay too much….

I was pretty much done at that point.  Completely full, as was the girl.  It was at this point that we were questioning the addition of another course.

Thankfully the Shabu Shabu wasn’t overly heavy, mainly consisting of strips of wagyu roast beef cooked in a broth, the tender beef was nice and sweet; but (maybe you guessed it), the heat returned and built over the course of the dish (from more green Thai chili).  Thankfully, there was some Japanese radish, which strangely helped cool and balances the dish, as did a sphere of lovage puree.  Unfortunately, there was a little gristle in my wagyu beef that was too tough to chew or swallow 😦

We had a hard time with the Dim Sum Black Truffle, on multiple levels.  First, we were pretty full by this time and the dim sum noodles were quite heavy; second, I found them a little boring.  Initially, I found the hit of umami from the duck’s cream sauce with Australian truffle quite nice, but as I progressed through the course, I kind of lost interest.  Now, it’s hard for me to say if it was the dish itself, which was well cooked, the fact that my palate felt irreversibly blown out, or it was just a matter of being too full to appreciate the bowl of noodles.

In this instance, it wasn’t just me, the girl was also conflicted about the dish, not really warming to the XO sauce underneath the noodles that overpowered the liberal amount of truffle.

It was time for our additional course of the highly recommended signature dish of Peking Duck; which was actually three courses in one.  Even the thought of the dish was almost too much for us; we’re experienced tasting menu consumers, but we were just about done.

It was a shame really, the three components of the dish were really well cooked, and quite nice.

Firstly, we had roasted duck breast with crispy skin, flavoured with five spices.  The flavour of the duck was rich and deep, but the skin was a little benign and could have used more seasoning. 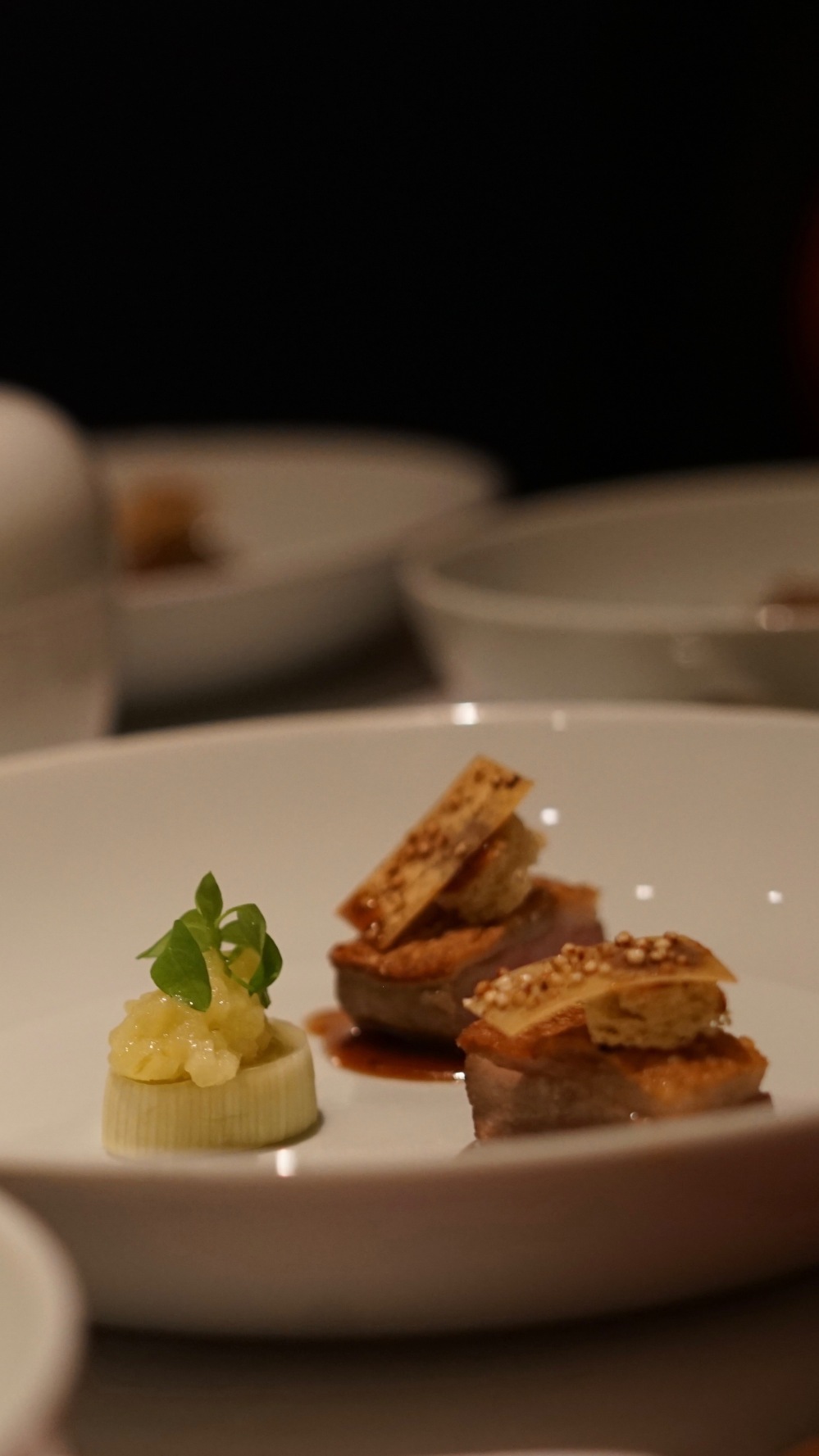 The second was a duck liver terrine with pickled cucumber and crispy duck skin; the foie gras was creamy and light, and the sauces that accompanied the pate were well balanced. 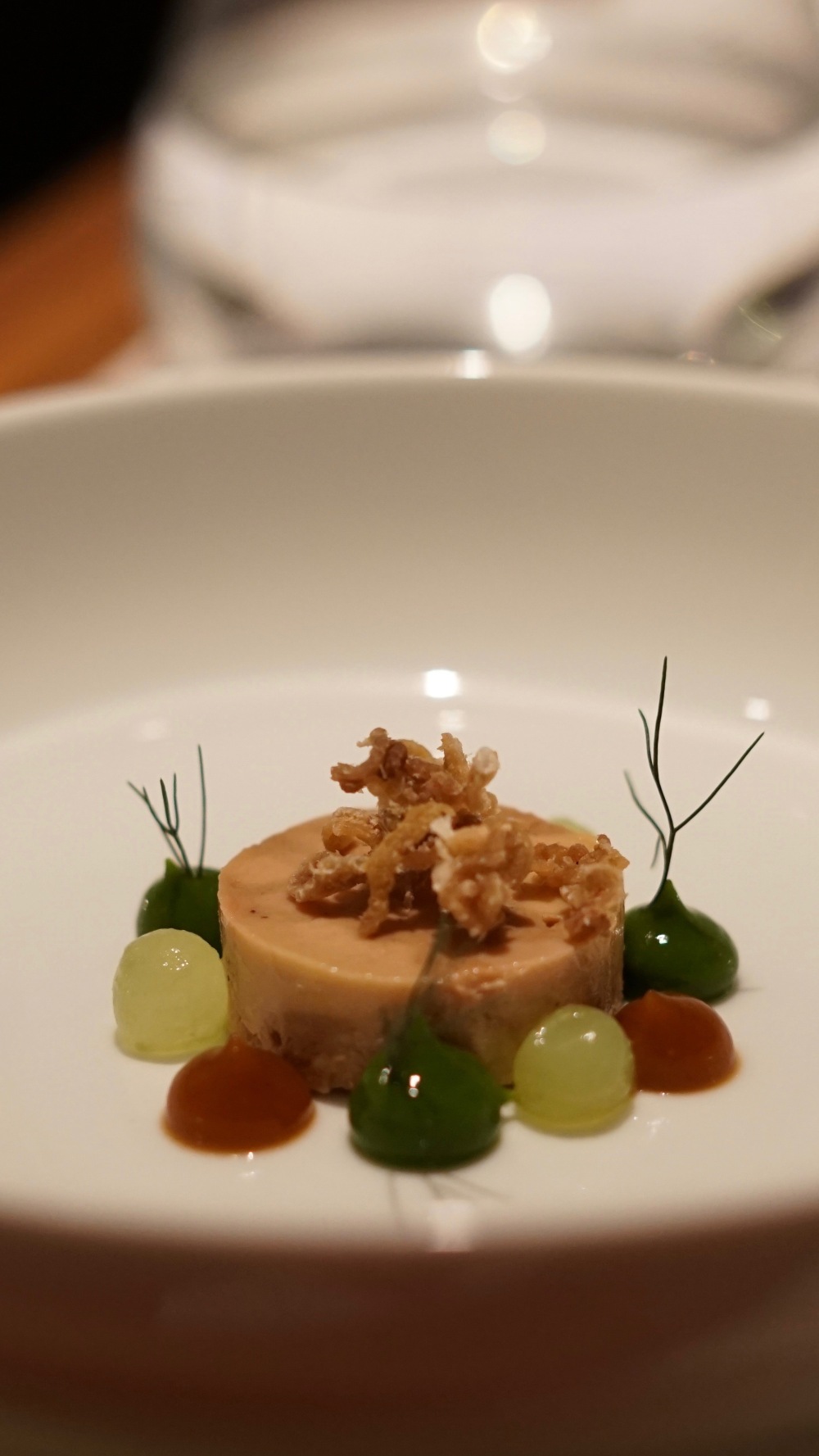 Lastly, there was a broth that was insanely flavoured using the tongue, heart and stomach of the duck with bamboo mushroom added for extra flavour.  I’d have perhaps loved the dish if I wasn’t so full, but it was a bit of a chore to get through the bowl (although I did love the duck hearts).

We were out of control full by this time, so the not very nice palate cleanser started to put a bit of a dampener on the evening.  I mean really, pairing banana and yuzu couldn’t have seemed like a good idea, could it?  I tried to eat as much of the custard-like bowl as I could but just couldn’t get through it all.

Dessert somewhat redeemed the meal, but it was pretty weird both in its construct and its flavour combinations.  Titled Passion Fruit, the dish consisted of cucumber sorbet set to look like a budda, surrounded by passionfruit foam and tonka bean flavoured ice pellets.  It was kind of refreshing, and kind of creamy, and kind of interesting, but it wasn’t gobsmacking delicious.  I think by that time I needed to stop being challenged with interesting food and just have a yummy dessert.

I have to say straight up, I’ve been lucky enough to visit a decent number of two and three Michelin Starred restaurants, as well as many of the top 100 restaurants on the San Pellegrino list.  With the latter, I’m pretty well split 50-50 with good/bad experiences and I have to say that my meal at Restaurant Tim Raue was more on the negative than the good.

Normally, I’m quite happy with heat in dishes if it’s there for a purpose and well balanced.  I simply thought the dishes had heat for the sake of having heat and as a consequence was out of balance.  I have to say I am a bit of a lightweight when it comes to heat, so someone that really loved the hot stuff probably would have enjoyed the meal more than I did.  Having said that, I think I could have enjoyed the meal more if there were a better balance and a little less heat.

There’s no doubt that I’m going to remember that Suckling Pig pork knuckle course for the rest of my life; it was quite spectacular and totally delicious….  It’s just that it was the only truly memorable dish on the tasting menu.

I’m glad we went to visit Restaurant Tim Raue, even if it was so I could tick off another top 50 restaurants; I just regret that I picked the restaurant for my Birthday Dinner.

There is always next year! 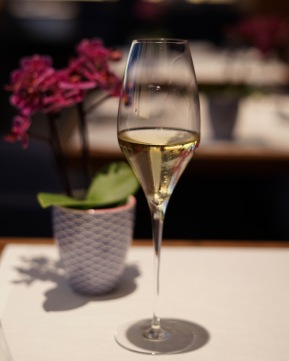