2017 has seen an inordinate amount of travel for me; in fact it feels like I’ve circumnavigated the globe a couple of times.  Not really a hardship, as it’s allowed me to visit a huge number of the world’s top 100 restaurants and ensured I’ve enjoyed some memorable meals.

While galavanting around the world searching out the best meals is fun, it’s easy to forget that one of the world’s very best restaurants is right here in Hong Kong, practically next door to my workplace.

The Richard Ekkebus run Amber at the Landmark Oriental is without doubt the jewel in the crown of the Hong Kong dining scene.  Ranked a very respectable 24 in the San Pellegrino #Worlds50Best restaurants and awarded an equally respectable two Michelin Stars (but deserving of three), the French fine diner should be on everyone’s restaurant ‘bucket list’. 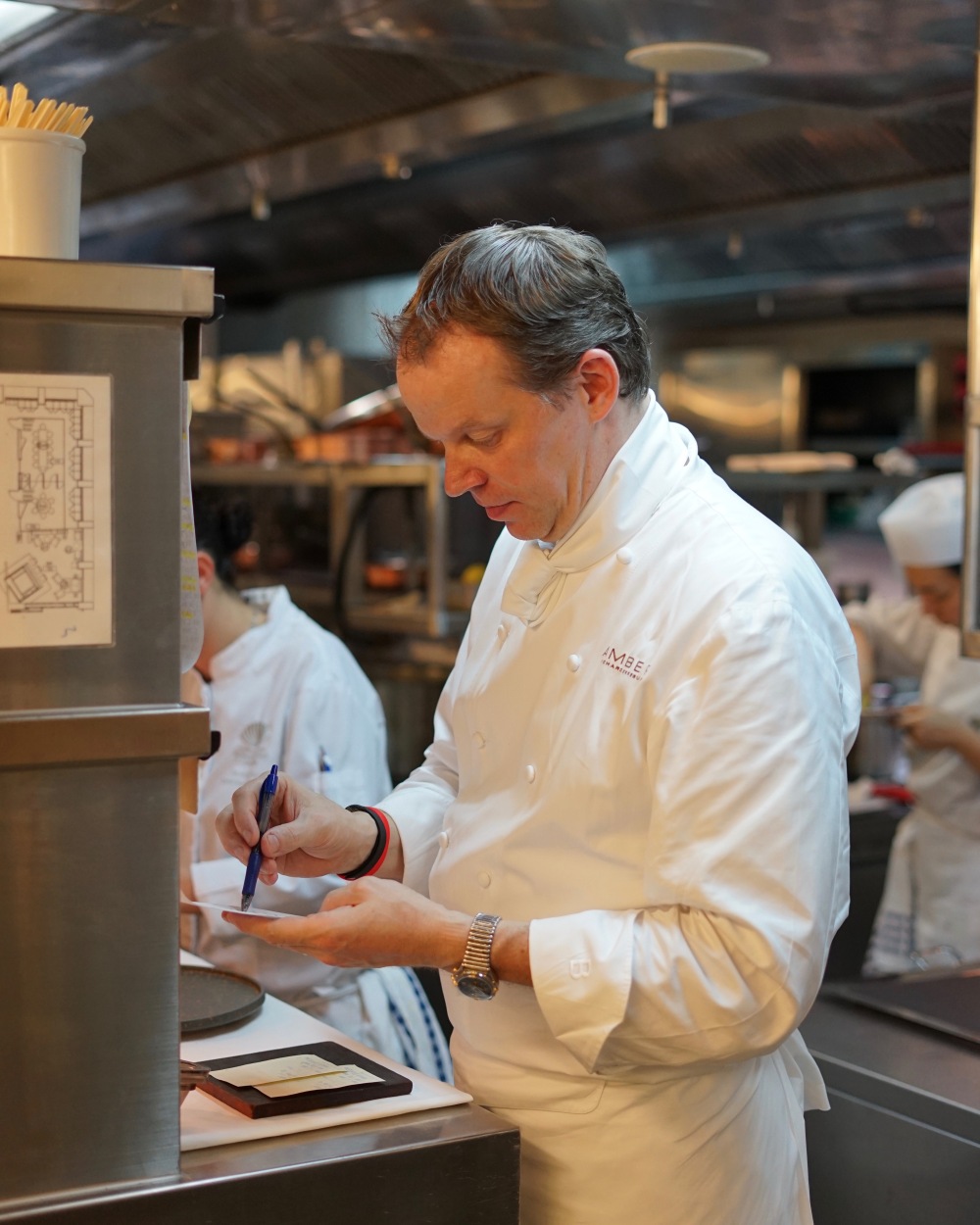 To be honest, it’s not as if I’ve ignored Amber, twice visiting the esteemed restaurant, it’s always been in the back of my mind to get back to.  It was the girl’s birthday wish for us to get back to Amber; and of course, who am I to get in the way of a birthday request?

The last time we were at Amber, it was actually for a special ‘four hands’ dinner with another of the world’s best chefs, Andre Chiang from the #14 Restaurant André in Singapore (see post here).  It was an OK meal with amazing food, but there was something missing that held it back from being truely memorable; but being a split meal between two uber chefs, it didn’t feel cohesive.

I’m happy to say that our third visit to Amber was easily the best, and upon reflection, was probably the second best meal I’ve had all year.

There’s always an amuse bouche to kick off a meal when you visit a top restaurant and I really loved the concept behind the latest Richard Ekkebus menu.  Fashioned on the five essential tastes of sweet, sour, salt, bitterness and umami; the treats were presented in an imaginative series of techniques and receptacles.  A salty sphere with oyster leaf gave way to bitter finger lime; technical spherification delivered an earthy hit before fresh sweet peas danced on the palate. 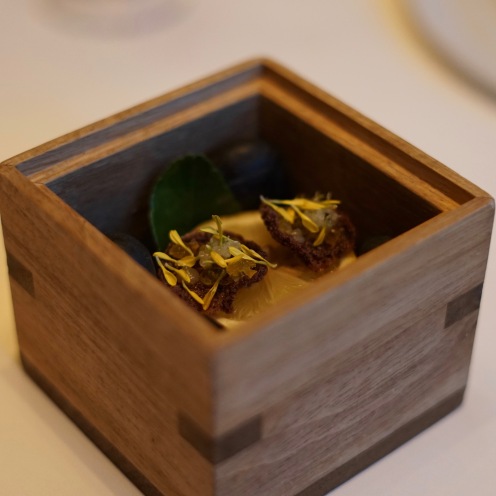 Lastly, the umami hit came from an egg custard with tomato paste and a seaweed cracker; the lingering taste on the back of the palate giving a warming feeling.

As I said, we were going to skip the first course of caviar but were eventually talked into going the full tasting menu and boy, was I glad that we included the dish.  The kristal schrenki caviar was easily the best start to a meal I’ve had in a long time.  20g of the deliciously salty caviar was precisely placed on a feuille de brick (super thin pastry), then covered in a perfect round of creme fraiche.  The dish was artfully finished with more of that caviar and hints of leek.  The crispness of the tart base held the dish together beautifully, the salty caviar balanced perfectly against the creamy disc on top.  So simple, so elegant and ever so tasty!

It was time for bread, and we had the choice of several types, the girl and I both choosing a rye bread that impressed the heck out of us.  Once we spread the hand churned imported French butter, it was difficult to stop devouring; in fact, we munched the bread down so quickly, that our waiter quickly brought over some more.  We wisely opted for one more round, again quickly devoured; before rejecting a third round of bread.

We had a long way to go with our meal, and we definitely didn’t want to fill up on bread, no matter how delicious!

Light and intensely flavoured, the heirloom tomatoes were given an immense flavour boost with the addition of watermelon and tomato water; which was poured at the table with just a little theatrical flourish.  Comprising of a selection of sweet fresh tomatoes, pickled rose petal and green strawberry salad, as well as stracciatella di bufala, it was a very interesting take on the classic flavours of cheese and tomato.

Of all the dishes we shared on the evening, the ebisu rock oyster was the one that split the table.  Without doubt the effort in presenting the rock oyster was supreme; plankton gel with organic kale seawater covered the lightly poached oyster, as well as organic lemon jell-o.  I personally found the dish a little too salty for my palate, which meant that I didn’t get any of the creaminess from the Japanese oyster.  On the other hand, the girl found the saltiness was bang on, and picked up the creamy notes of the oyster, and loved the dish. 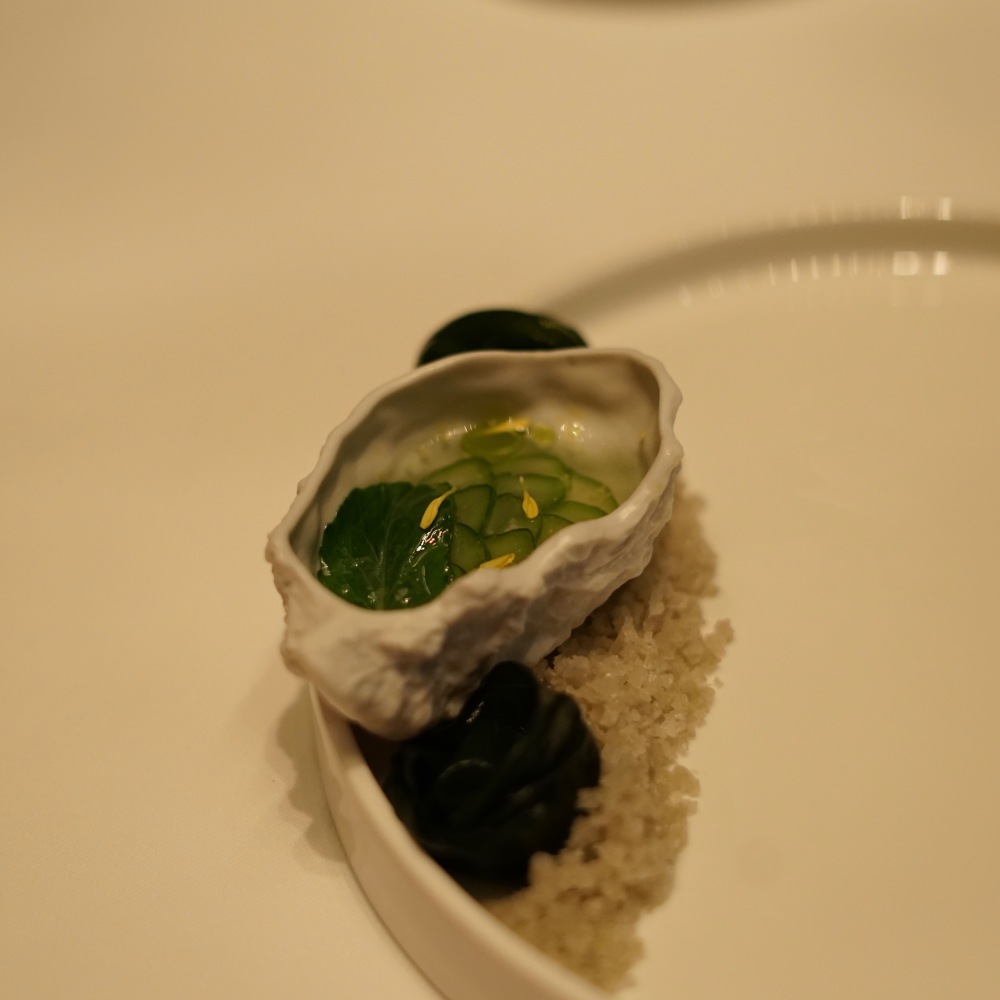 There was absolutely no doubt about the following course though; simply titled langoustine, the intricately presented and complex dish was sensational.  Minced and airated langoustine covered a layer of textures of turnip, on top of the langoustine were a couple of beautifully prepared Hokkaido uni that were carefully wrapped around more of that lovely schrenki caviar.  Thin slices of granny smith apple finished off the dish for a tiny hit of tartness.  Oh-my, the combination of flavours and textures were simply breathtaking, there was a creamy sweetness from the langoustine that contrasted against the salty uni and caviar.  Just wonderful and probably a dish that would stand the test of time at Amber. 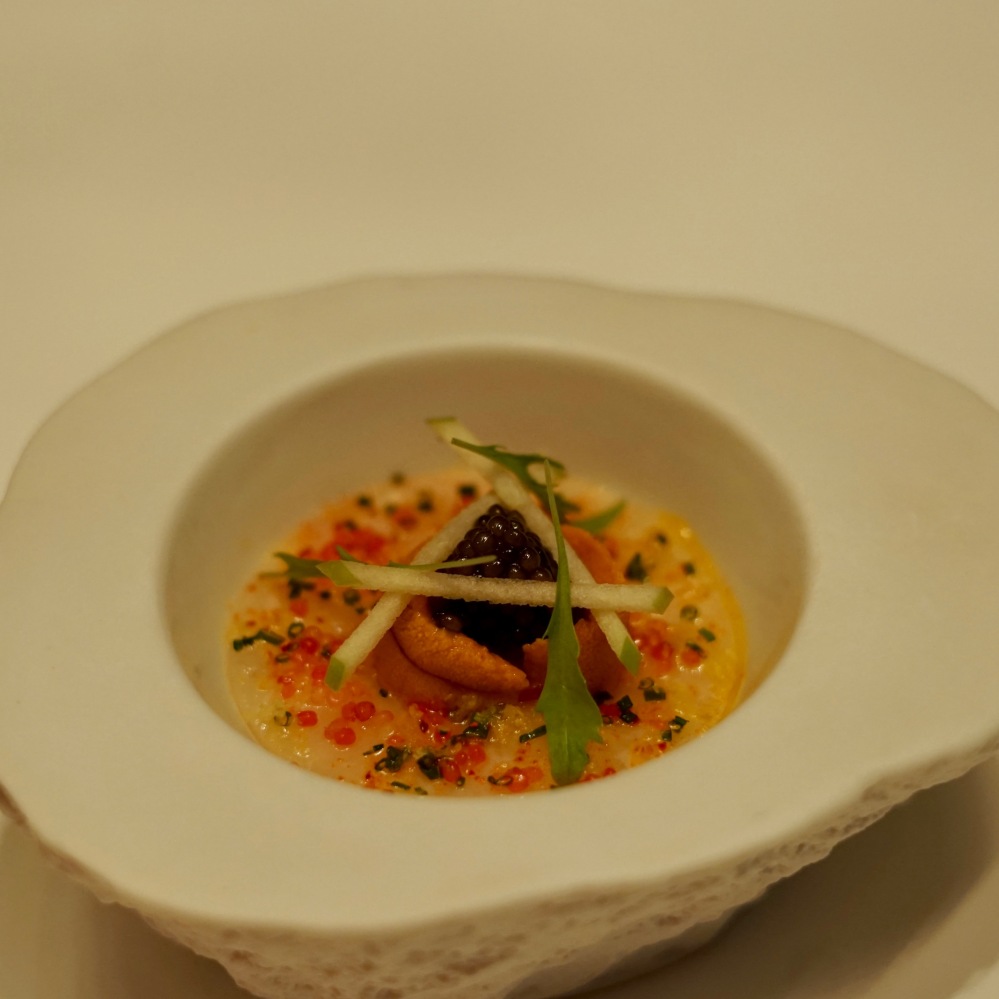 Things kept getting better though.  The cantabrian octopus provided a visual feast, as well as a feast for the palate.  The smoky flavour of the octopus which had been slowly cooked over charcoal was both subtle and intense at the same time, providing layers of flavour.  A coulis of fermented bell pepper gave a sharp contrast, both sweet and well balanced against the smoky tentacle pieces.  I loved the addition of pearl onions, which gave a contrasting texture, and when combined with the octopus and bell pepper, ensured that all of my senses (apart from touch) were set alight.  Even the girl, who would not count octopus as a dish she’d enjoy, loved the dish.

Intensity of flavours; it’s all I can think to say about the duck foie gras, which was served with charred Japanese shiitake and pickled enoki.  Served with a ‘mushroom tea’ which was poured at the table, and enhanced with a mushroom foam, the foie gras could not have been in better company.  The super intense mushroom tea was balanced superbly against the creamy and earthy flavour of the foie gras; the overall hit of umami from the dish was actually really exciting.  I devoured the lot and poured every last drop of that tea into my mouth (it probably didn’t look too elegant!) 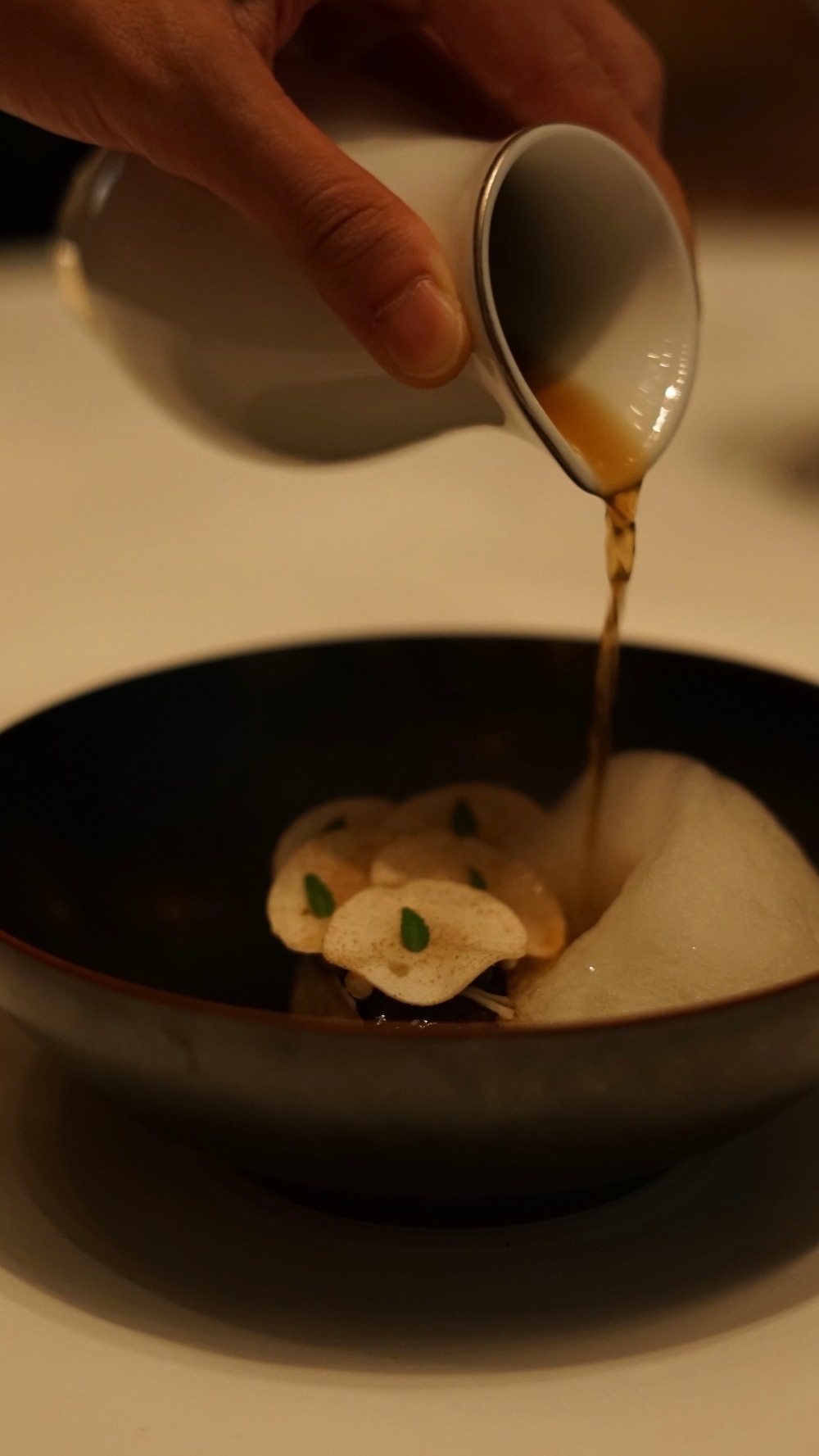 It was time for our ‘main’ component of the tasting menu; we’d had a choice of miyazaki wagyu beef or line caught red mullet, with both of us choosing the former.  Ultimately though, Chef Richard surprised us with both for the evening, which was unexpected but much appreciated.

The line caught red mullet came first, and it was a simply stunning plate of food, visually beautiful sure, but most importantly, just a really yummy plate of food.  The expertly cooked mullet was balanced on ribbons of white asparagus and was dotted with crispy mullet liver and cuttlefish ink gel.  These components were also dotted on the plate for visual impact, as well as quenelles of confit of tomato fruit (like a tomato sauce).  The mullet was mid flavoured and paired beautifully with the tomato, a flavour combination that I’d never experienced before and one that worked a treat.

Alongside the mullet was a little pot containing a rich and intensely flavoured mullet bouillabaisse, ensuring that every part of the fish was used; it was light and foamy, finishing off the dish nicely.

We were starting to get full, which meant that I was able to double up on the next dish of hakoo farm miyazaki wagyu beef!  Obviously beautifully presented, the medium rare wagyu strip loin was served with red pearl onions with cassis in a shiraz reduction.  Colour came from a dusting of dried red onion skin and dudley seaweed powder, which had the extra benefit of adding a little extra flavour.  Man, that beef was so good, the fatty texture cooked to perfection and dancing wonderfully on my palate.  Extra intense flavours came from the shiraz reduction and the pearl onions.  I loved it all the more because I finished off the girl’s beef (she was at her limit of consumption!)

It was time to bridge the gap between savoury and sweet; our palate cleanser was highly unusual but equally perfect for the task.  Combining sweet and earthy flavours, the ‘burlap’ cherries saw the combination of textures and temperatures to assault the palate and prepare it for the sweets to come.  Tartness from the cherries contrasted against earthy beetroot slices and a brilliant mini 8 vinegar granite; the girl found the dish a little confronting, but I simply loved the flavours. 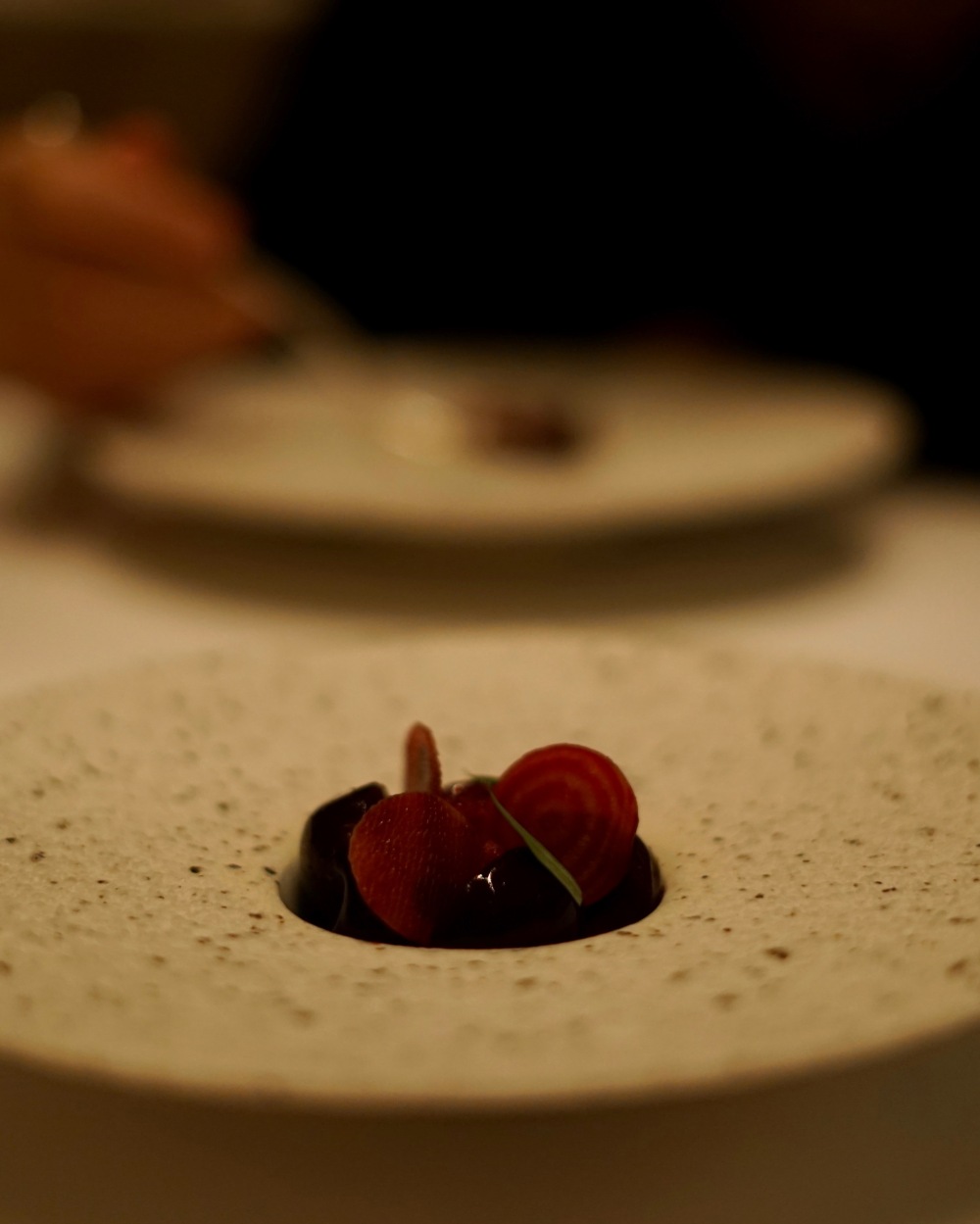 The palate cleanser was also the perfect introduction to our first dessert; rhubarb.  It was simply beautiful to behold, the bowl smeared with a coating of strawberry jam which held a quenelle of strawberry sorbet balanced on candied rhubarb.  Hidden inside that candied rhubarb maki was a milk foam with jasmine rice and black pepper; all combining to provide a pleasurable and sweet hit to the palate.  Another Amber gem that will no doubt become an iconic dish for Chef Richard.

Our last dessert was simply wonderful, which surprised me a little.  I’m so used to chocolate desserts assaulting my palate that I was quite unprepared for the well balanced flavours of the caramelised milk chocolate ‘caramelatte’.  The dish looked like it would continue wiht that trend, but once I cracked into the chocolate, there was a great balance between dark and light chocolate, caramel and coffee.  The play of textures was lovely in the mouth, the flavours well balanced and the dessert was a wonderful full stop to a beautifully balanced tasting menu.

Of course, it wasn’t really the end of the meal; not only did we get the obligatory petite four at the end, but we were surprised by a birthday cake for the girl.  The dark chocolate cake lit with a single candle and a celebratory message for the girl.  A definitive full stop and most appreciated 🙂

Or last action of the evening was to head out to the kitchen and thank Richard for a sensational meal.  Our first trip to the Amber kitchen, I was taken aback by the sheer size and majesty.  It was easily five times the size of the kitchen at Per Se!  I have to say, it’s always enjoyable chatting to Chef Richard, easily one of the friendliest and accessible chefs that I’ve had the pleasure of speaking to.

It’s easy to like Amber.  The food is sensational and Chef Richard Ekkebus is a top bloke.  It would also be easy to talk about Chef Richard’s rise to the top and the chefs and kitchens that he learned his trade; but to be honest, I think it would also be a little disrespectful; Chef Richard is at the very top of his game, running a restaurant that should be on everyone’s restaurant bucket list.

I’m sure there are plenty of chefs out there that will be noting that they learned their trade under the great man.  In fact, we’re planning on visiting one of Chef Richard’s alumni when we visit Amsterdam in a couple of months.

We will be sure to say hi. 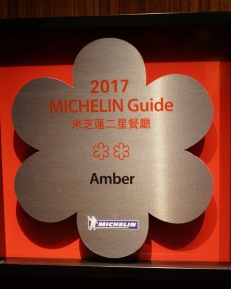 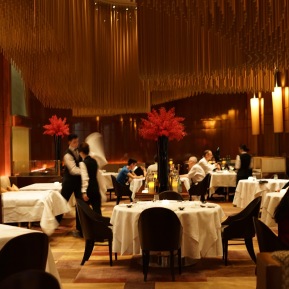 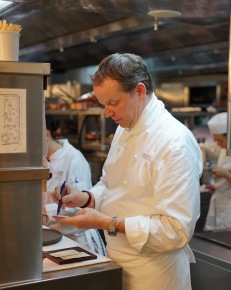 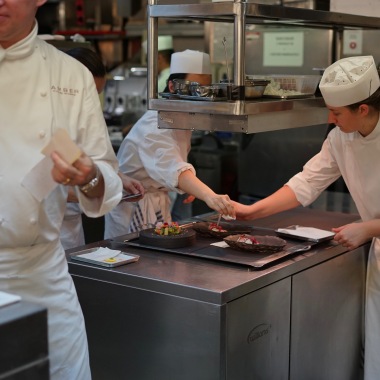 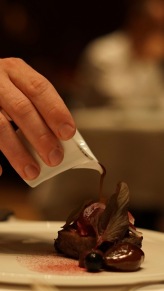 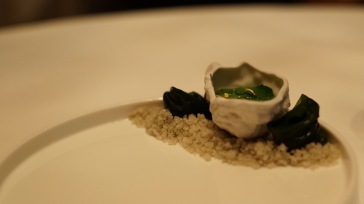 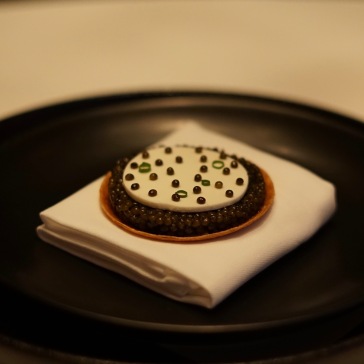