It’s not really anything to be honest, but it most certainly is an unexpected spot to find a surprisingly authentic Spanish restaurant.

We’d walked past The Optimist a couple of times; each time commenting that we really should get in and check it out.  It wasn’t until our F45 bud, SH, suggested it as a destination for a double date that we finally locked it in.

The night started off brilliantly, with a quick trip around Victoria Harbour on the cool Aqua Luna; drinks in hand and watching the sun set over the horizon seemed like the perfect start to any evening.  Unbeknownst to me, the Aqua Luna dropped us off on the TST side; which wasn’t a problem but it did mean that we were going to be pushing our reservation time!

A quick trip across the Harbour on the Star Ferry and a quick taxi ride had us deposited on Hennessey Road pretty much right on time; however, it took us a few minutes to walk from our drop off point to the restaurant facade.  The Optimist is both hard to find and hard to miss.  The frontage is almost hidden amongst the ratty shop fronts and it’s not until you’re right at the front door that you see the clean green lines of the modern looking restaurant.

It looks well out of place!

Downstairs is a funky looking bar; where we’d end up finishing our night sipping massive on-the-house G&T’s (more on that later).   We wandered up the steep steps that transformed us from that no-mans-land part of Wanchai to Spain.

The dimly lit dining room had an old world charm; there was a vibe to the restaurant that was already filling up quick that made us instantly at ease.  Menus were presented with a la carte and tasting menu options up for discussion; the latter looking great but lacking one key ingredient…. Chorizo!

It was a problem easily solved; but left us feeling a little greedy.  We went with the tasting menu but added two extra serves of the chorizo from the a la carte menu (our thinking was that two was better than one!) as well as the 48 months Jamón ibérico de bellota (’cause why not!?)

While we waited for our feast to arrive, we were given a basket containing a pile of crusty bread, as well as a side of some sweet / acidic tomato paste for spreading.  It was an interesting take on the classic Spanish dish of tomato bread; allowing us to spread as much of the paste as our hearts desired (in my case, it was quite a lot).

Croquettes were the first dish to arrive, the golden orbs coming in two shapes; the traditional elongated and little perfect spheres.  I’m not a huge fan of croquettes, something about the texture not sitting well on my palate; however, objectively, the golden orbs were incredibly well prepared and the creamy Iberian ham flavour quite pronounced.  There was an audible crunch as I cut my croquettes in half, which was impressive.  More the point, they were actually really good.  As a bonus, the croquettes were presented on little beds of potato straws, so we munched on the little salty treats until our next course.

I was mightily impressed with the huge board of the aged ham; the glossy and fatty jamón laid out to cover the entire board.  There was more of that lovely tomato paste included, as well as toasted bread to help balance out the fattiness of the ham.  It was delicious, but my main gripe with the dish was the thickness of the pork.  I usually love the dish sliced super thin, which somehow helps with the sweetness; with the thicker cut, it was a little chewy and ever so out of balance.

When I think of Spanish cuisine, I’m immediately drawn to chorizo; it’s one of my favourite foods and something that I will always order when on the menu.  I’ve a preference for the slightly hotter chorizo that has that wonderful red colouring from smoked and dried red pepper.  The Optimist version was closer to the Argentinian version of chorizo, which is much sweeter with the normal colouring of pork sausage.  While our version was not what I expected, the sweet and succulent sausage was delicious and SH and I ended up not only finishing our serve, but also finishing the girls! Weirdly, it was served with roasted pumpkin and garlic halves; the former quite popular with SC!

I loved the simple presentation of the Burrata and raf tomato, the rustic bowl perfect for the large slices of tomato and the huge mound of burrata cheese.  Look, I can find this dish a little boring at times, but there was an abundance of olive oil and the right amount of seasoning to make the tomato flavour pop.  The creamy soft cheese was a wonderful balancing act to the sweet and acidic tomato and before long, the bowl was picked clean; definitely an excellent version of the dish, kept simple and not over complicating things by adding unnecessary extras.

I LOVE tuna tataki and was surprised to see the traditional Japanese dish on a Spanish tasting menu.  One look at the presentation was enough to inform me that it was far from the traditional Japanese dish, the thick cut red tuna rolled up like a rose and sitting in a bed of almond cream.  While I loved the flavours of the dish, the sweetness of the almond cream playing with the ponzu dressing covering the fresh tuna; I did find the slightly grainy texture of the almond cream off putting.  It would have been superb if it had been a light and aerated foam, and would have been more Spanish because of the treatment.

I didn’t eat many of the Clams Almejas en salsa verde, but they looked and smelled wonderful.  The aroma from the garlic and white wine sauce was insane; but I’m cautious about eating shellfish in Honkers after many a day with food poisoning!  I did risk two of the little molluscs and was rewarded with a punchy sweet hit and fortunately, I didn’t get sick!  The rest of the table plowed through the two pans of clams with abandon and definitely enjoyed the dish. 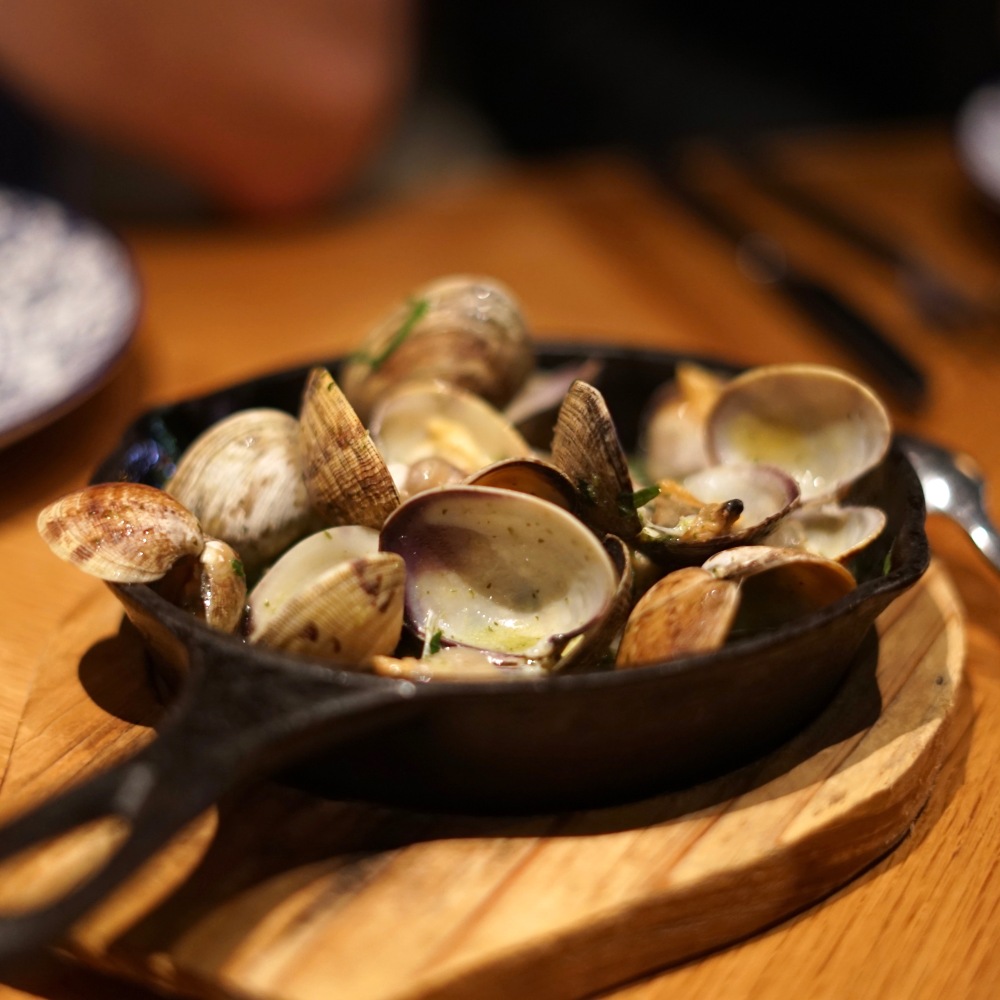 Without doubt, the dish of the night was the Broken eggs Huevos rotos;  I mean, how could it not be?  A cast iron skillet overflowing with Iberico ham, that sweet sweet chorizo, crispy flat potato and black truffle; all covered with a couple of fried eggs with very runny yolk.  It was an absolute beautifully balanced dish, the runny yolk and egg seeped into the pan; the combination of the ingredients was like a party in your mouth with each bite; it was the only dish that I had food envy, in that I had to share it with anyone else. 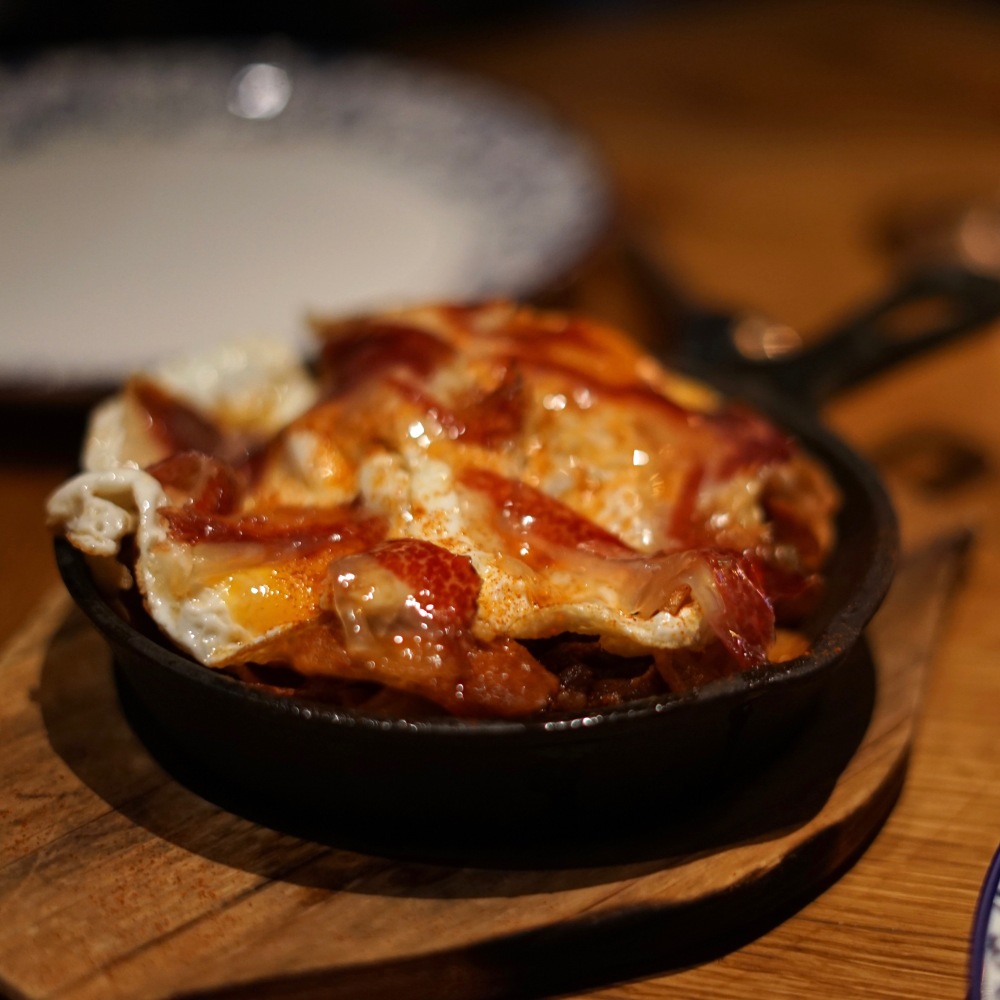 I would go back to The Optimist again, just so I could have the whole dish to myself!

It was time for mains, which were the only dishes that weren’t shared for the whole table; I did manage to get a small taste of the Mediterranean whole sea bass ‘A la espalda’ (loosely translated to on the bone), that was bathed in an intense garlic butter sauce.  The sweet flesh was expertly cooked, holding its texture nicely and soaking up the garlic sauce for a flavour packed mouthful.  I think S&G did very well with the selection, but…

…It didn’t stack up when compared to our Chateaubriand; the Spanish fillet of beef was served with potato gratin and a side salad.  What made the beef so spectacular was not just the expert preparation, presented a perfect medium rare; but the expert level seasoning.  The beef flavour just popped off the dish, the flakes of salt on the beef making it irresistible to me.  Thankfully, the girl was busy chatting away to our dining companions and didn’t really notice that I consumed nearly three quarters of the dish…

I don’t think she minded though, the abundance of great food to that point had left her quite full 🙂

Dessert was a selection of sweets from the Chef and included some beauties.  My pick was the roasted brioche with coffee ice cream; the golden brioche was toasted up like french toast and covered with cinnamon.  The centre was so creamy and unctuous and utterly scrumptious. 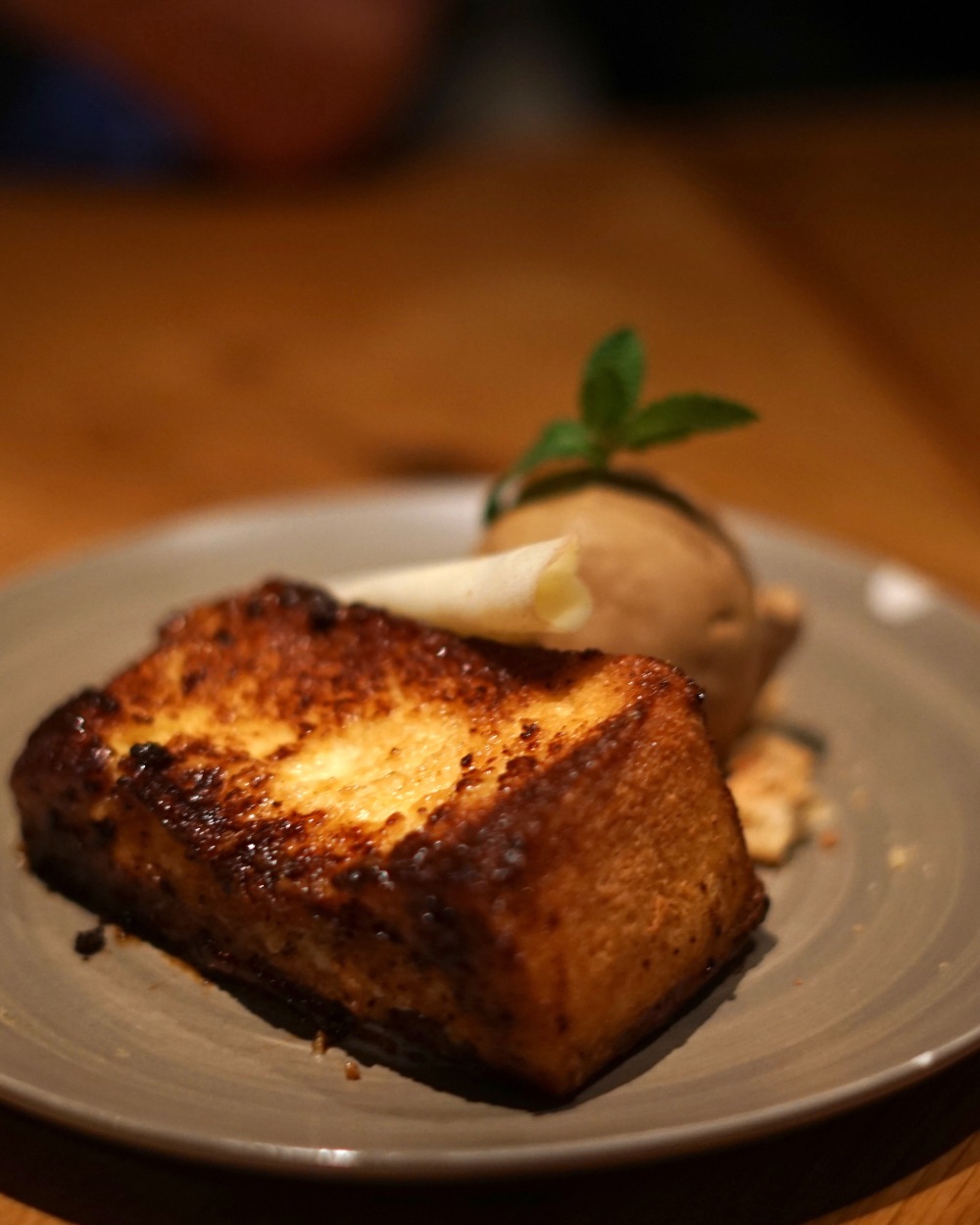 We also had a traditional Spanish flan with a vanilla ice cream; the flan was creamy and held together nicely but was just a little sweet for my palate.  Lastly, there was a jar filled with a cheese cake and accompanied by a container filled with a berry coulis; I loved the balance between the sweetness of the cheesecake and the tart berry. The combination of desserts were well thought out though, with a mix of textures, flavours and levels of sweetness there was something for everyone.

It shouldn’t have been a surprise that The Optimist meal was a winner; Head Chef Alfredo Rodríguez Sangrador (Chef Alfredo for short!) had honed his considerable skills in some excellent Spanish restaurants, including Michelin Starred Kabuki Wellington in Madrid; which also explained the slight Japanese bent to the menu (but let’s be honest, everyone seems to be influenced by Japanese cuisine here in HK).

We’d had such a brilliant meal and the company and conversation had been so good, that we didn’t notice the passing of time; it wasn’t until the restaurant Manager came and offered us a bribe to leave the table for the next guests that we realised that it was getting late!

Which lead us back downstairs to the bar, listening to the DJ spinning some tunes and those huge glasses of Gin and Tonic 🙂

I loved our dinner at The Optimist and rate the joint as one of the better Spanish places in Wanchai – no mean feat in an area that hosts 22 Ships and Ham & Sherry.

It’s even worth wandering through no-mans-land to get to 🙂  Get in and check it out! 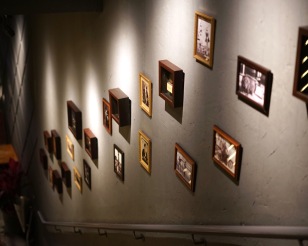 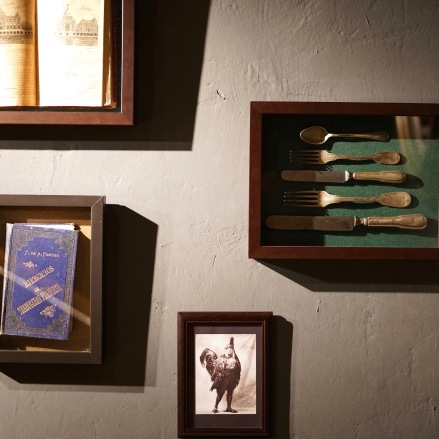 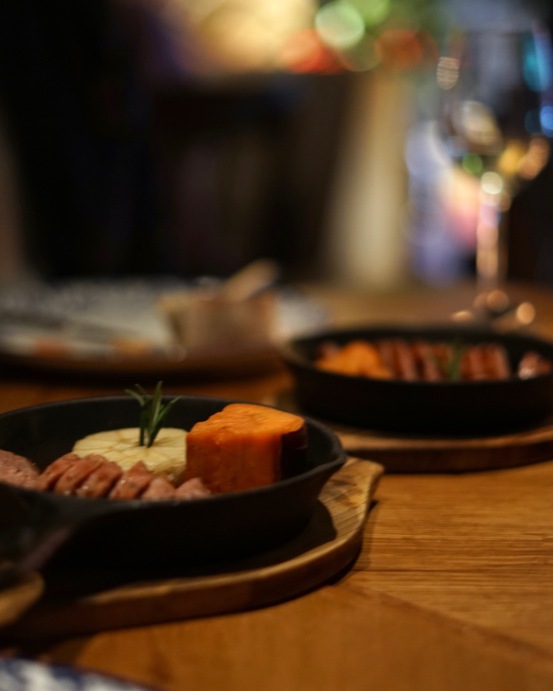 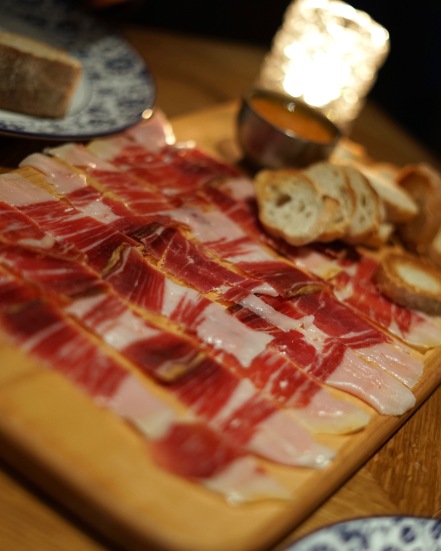 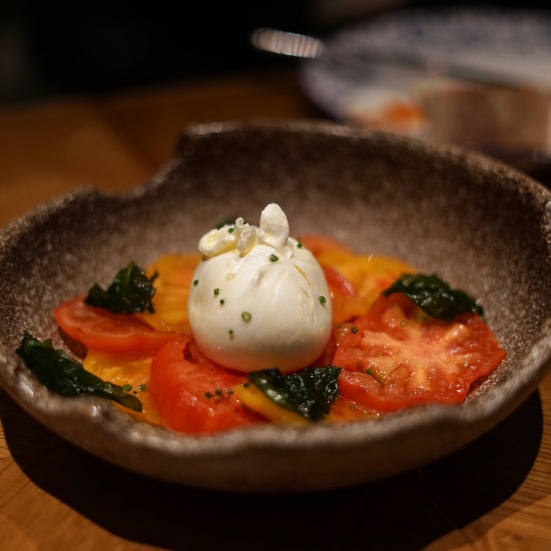