With a weird name that makes no sense initially, 12,000 Francs has delivered a meal that was incredibly rewarding.

In 1795, a little fellow by the name of Napoleon Bonaparte offered a princely sum of 12,000 Francs to anyone who could devise a method of preserving food for his all conquering armies.  I guess the old adage that an army survives on it’s ability to be fed has always been true! (The actual quote attributed to Bonaparte is actually ‘an army marches on it’s stomach‘)

Well, a guy called Nicolas François Appert eventually developed a technique (which is still used today) to claim the Emperor’s prize; That technique was about storing food in wine bottles that were heated to boiling point before being sealed.

Well, as you can imagine from a restaurant that takes its name from such a clever historical reference, 12,000 Francs is a smart casual diner that specialises in using preserving techniques at it’s core.  Which is potentially a smart move, with many of the world’s best restaurants using pickling and preserving techniques for key components of their menus.

Head Chef Conor Beach, a guy that’s worked at some of Hong Kong’s top establishments, including Bibo and Tri, creates, prepares and delivers all of the restaurants dishes from scratch; including using a heap of different preserving techniques. 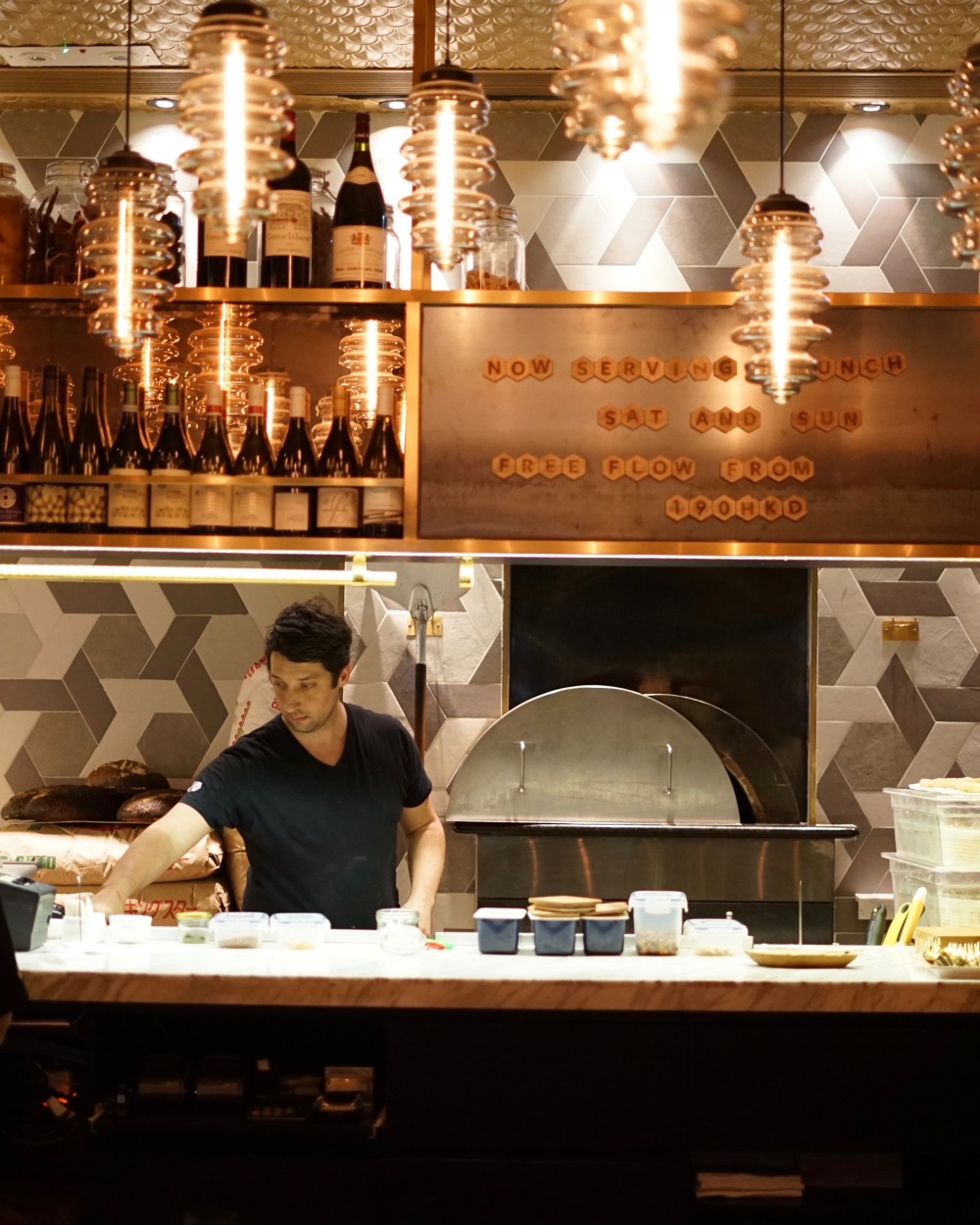 We arrived to a nearly empty 12,000 Francs, which kind of surprised us; given it was the Rugby 7’s weekend, we figured that Soho would be totally pumping.  Taking our seat, we were interested to see the renovations within the space.  We’d actually eaten at the location a couple of times in different restaurants; strangely (or maybe not so for HK), it was the third different restaurant in the same location in eighteen months.

Once seated, we were given the run down on the restaurant’s ‘theme’, as well as a couple of menus; a short tasting menu, and an al a carte menu split into relevant sections (each relating to a preservation technique).  We seriously contemplated the tasting menu, but decided that we’d rather create our own from each of the sections; which included Pickled + Potted, Smoke + Salted, Vacuum + Fire and Sugar + Sweet.

We started with the house made sourdough with cultured butter, which came out slightly warm and very fresh with crunchy crusts.  There was a decent amount of the cultured butter, which had a sweet and creamy flavour; but the girl and I still managed to argue over who would get the last dollop!  We loved the slightly astringent flavour of the sourdough, itself using cultured yeast, and it was quite delicious once the butter melted into the bread itself. 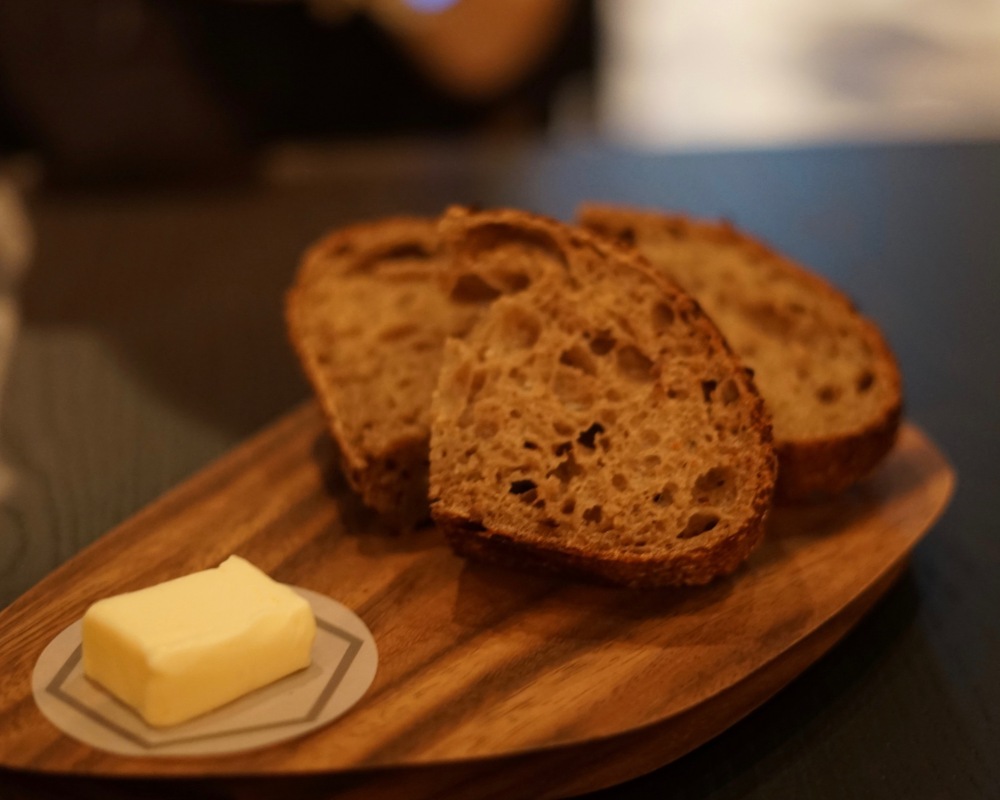 The house filtered still water came out in a camouflaged canteen, keeping the ‘army’ theme going throughout.

As we were munching through the sour dough, we had some additional ‘charred’ sourdough delivered, along with the pork terrine with pickled vegetables.  From the pickled and potted section of the menu, the terrine was quite pretty and was covered with pickled onion, cauliflower and gherkin.  The pickling didn’t stop there, as we ploughed into the creamy terrine, there were additional pickled vegetables planted for additional texture and flavour.  The pork was very sweet, and worked wonderfully with the charred sourdough, but it definitely needed the acidity of the pickled vegetable to balance that sweetness. 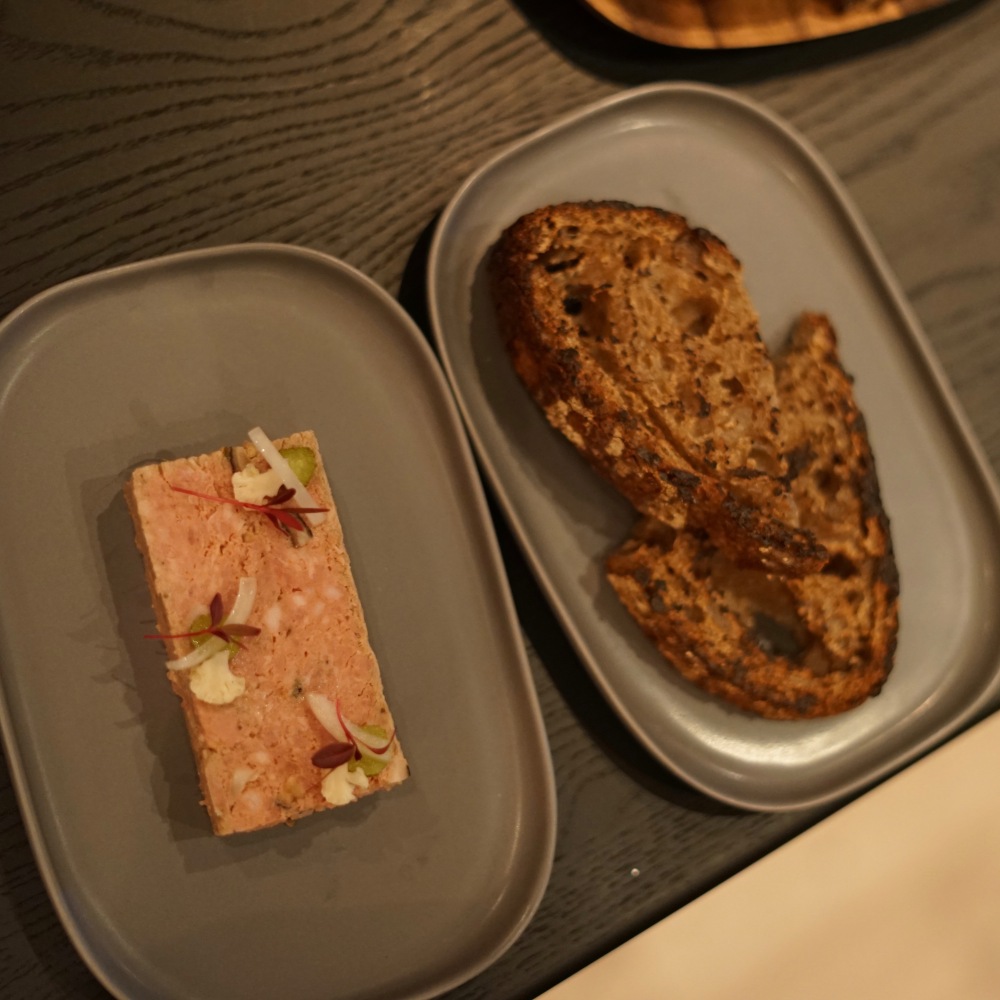 I was super impressed with our next selection, which to be quite frank was one of the yummiest dishes I’ve had this year!  The Merguez and Onion was simply sensational; not only did it look pretty, but the lamb and beef sausage that constituted the key component was delicious.  It was super sweet and had a lovely soft texture that signified ‘house made’ and worked beautifully with the sweet charred onion and astringent pomegranate.  A lovely plain yoghurt was on hand to help flatten out the sweetness of the dish, which was both the girl’s and my favourite.

The only issue was the portion size.  Really guys, ya can’t give us something so delicious but only give over three portions.  I know that the eye likes odd numbers for presentation, but my belly likes four better – more to eat!!

Our next dish was equally fabulous; both aesthetically and taste wise.  The House Smoked Salmon was served with green asparagus, preserved lemon and ricotta, then finished off with Salmon roe.  The lightly smoked salmon was perfect, I’m not a huge fan of overly smoked fish, it can get tough; and the salmon was as fresh as you could hope for and very delicate.  The balance of flavours from the lemon flavoured ricotta worked nicely with the sweet fish, continuing the trend of incredibly flavoursome but balanced dishes. 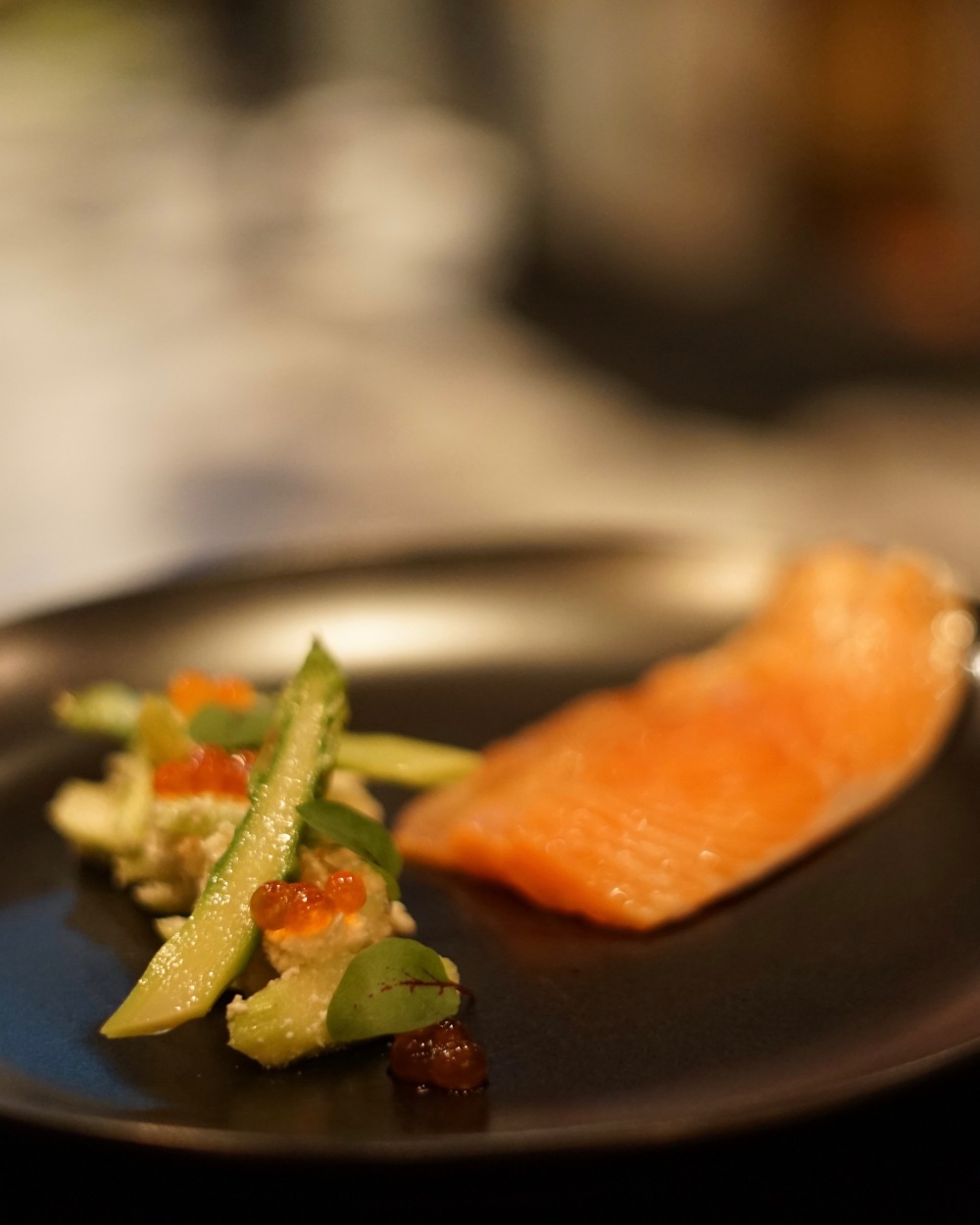 We finished with the Lamb Belly Spare Ribs, which was presented quite rustically compared to the previous dishes.  With a mix of heirloom carrots, roasted parsnips and pickled cauliflower, the dish was both well orchestrated and messy at the same time.  The applewood smoked lamb belly was expertly cooked, the fat rendered wonderfully and the sweet flesh delicate on the palate.  While the lamb didn’t quite fall-off-the-bone, it was very tender and very more(ish), so the three pieces we had each seemed a little light on.  It was made up for with the generous serving of seasonal roasted and pickled vegetables, that had an extra kick from some salsa verde. 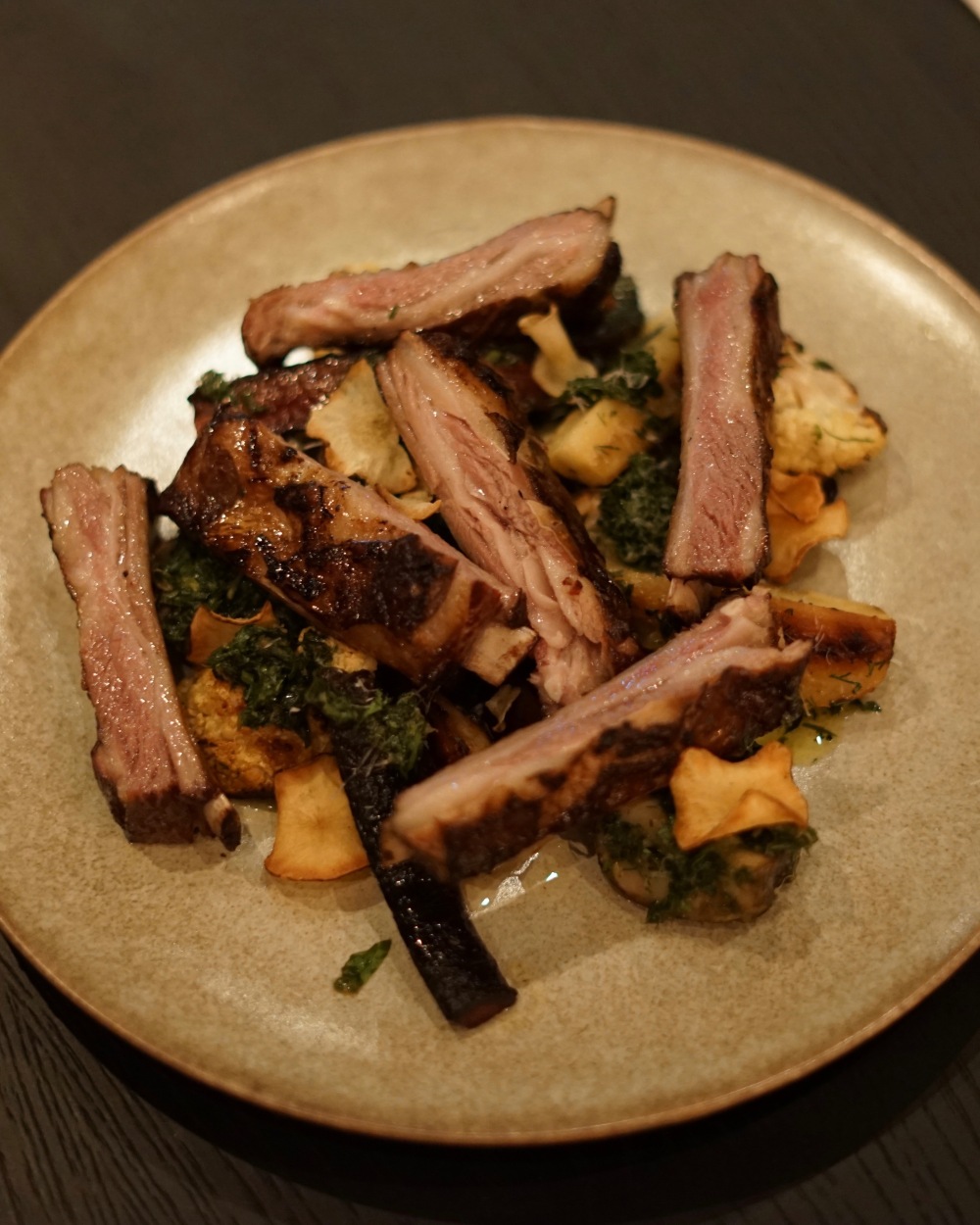 Calling it a day without ordering a dessert; head chef Conor Beach brought over a little treat, with a comment that we couldn’t be taking so many photos of the food and not try a sweet end!  So we did finish with a quenelle of six spices sorbet, which was interestingly sweet and savoury at the same time;  While I can’t remember all of the spices (our waitress did on the night), there was definitely mint, basil, parsley and coriander (luckily the latter didn’t leave that soapy taste that can sometimes happen with too much coriander). 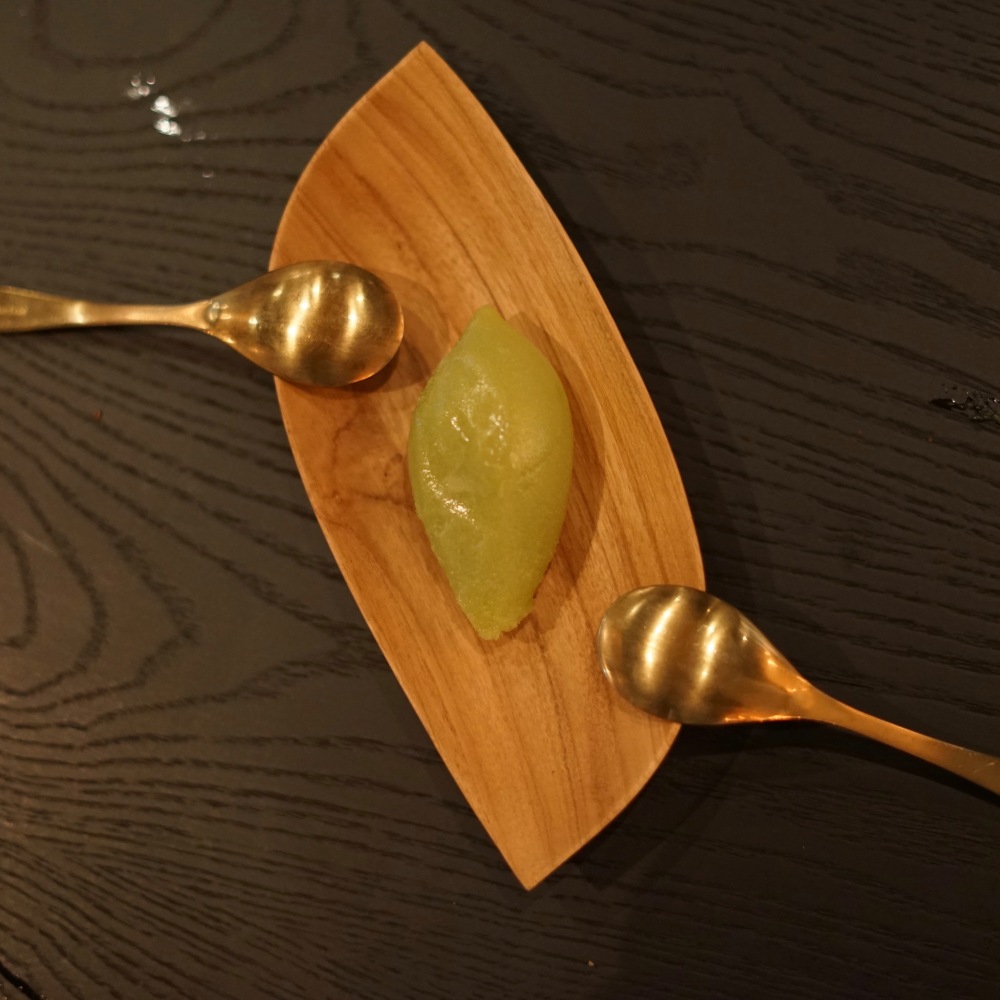 It was actually really nice, and gave us an incentive to try one of the desserts on our next visit.

That there will be a next visit is unequivocal; we simply adored each and every component of the meal that we’d hastily consumed.  The food was really inventive; given the very traditional techniques involved in the preservation process, as well as tasty.

Service was top notch, but you’d hope and expect that to be the case on such a quiet night.  Which was a bit disturbing to the two of us, to be honest.  Knowing the history of 43A Elgin Street, I’m a bit worried that 12,000 Francs has chosen one of those dreaded ‘dead-spots’ that end up being restaurant graveyards.  To be fair, we don’t get to Soho as much as we used to; Wanchai meeting most of our dining requirements, so it could be that we just picked the odd quiet night.

Whatever you do; get in and check out 12,000 Francs.  It’s reasonably priced and the food is to-die-for great.  You’ll definitely regret not getting along 🙂 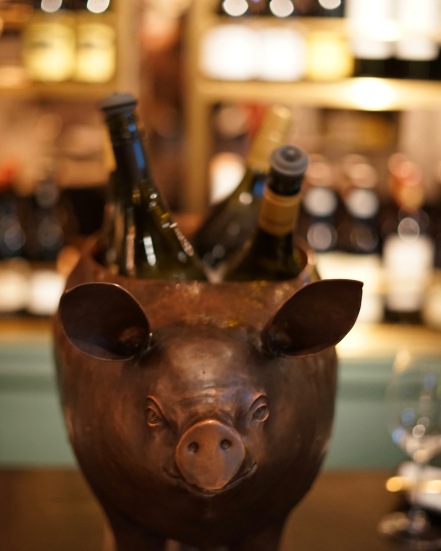 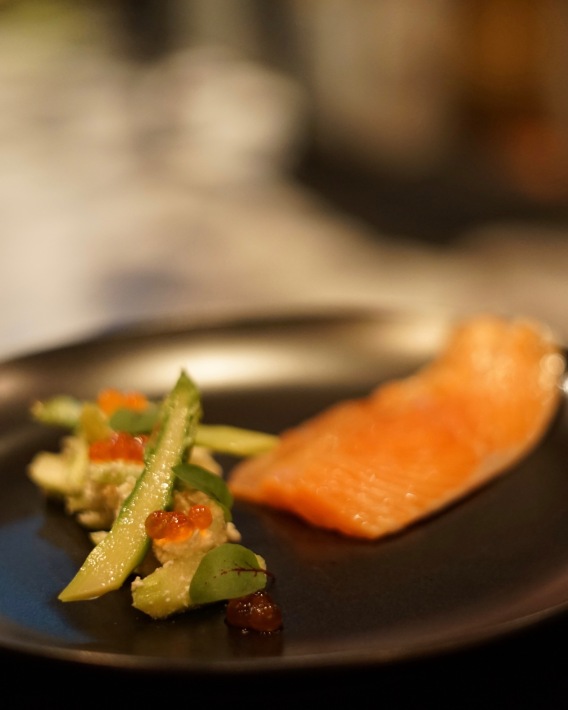 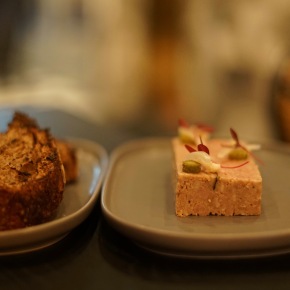 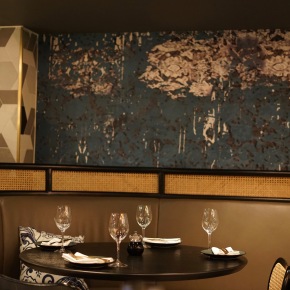 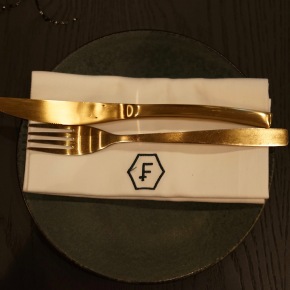