It’s been a pretty big week in the foodie world.

At some point, you probably saw that the latest #Worlds50Best was released; you know, the annual glorification of the top end of the restaurant scene.  I must admit, I watched the ceremony through the live streaming site and was interested to see who the winners and losers were.

Of course the annual list of the top 50 restaurants changes, it would be a pretty boring place if it stayed the same; but I was glad to see Eleven Madison Park pick up the gong for the 2017 best restaurant.  I’ve been and it’s glorious (see post here).

Located in the trendy London area of Shoreditch and more specifically in the old Shoreditch Town Hall, I found the restaurant particularly difficult to find.  Google Maps had failed me and I found myself wandering up and down ‘Old Street’ looking for the entry.  Fearing I’d be late for my lunchtime reservation, I finally decided that I’d call and ask; and felt like a goose when I realised I’d been standing out the front the whole time!

As I made my way in side the old Town Hall and unloaded my heavy coat that had shielded me from the snowy conditions outside, I couldn’t help compare the decor of The Clove Club to a modern pub.  A feeling which persisted when I was seated at the bar for my meal.  I was also surprised with how small and rustic the dining room was, expecting something a little larger (but not sure why!) 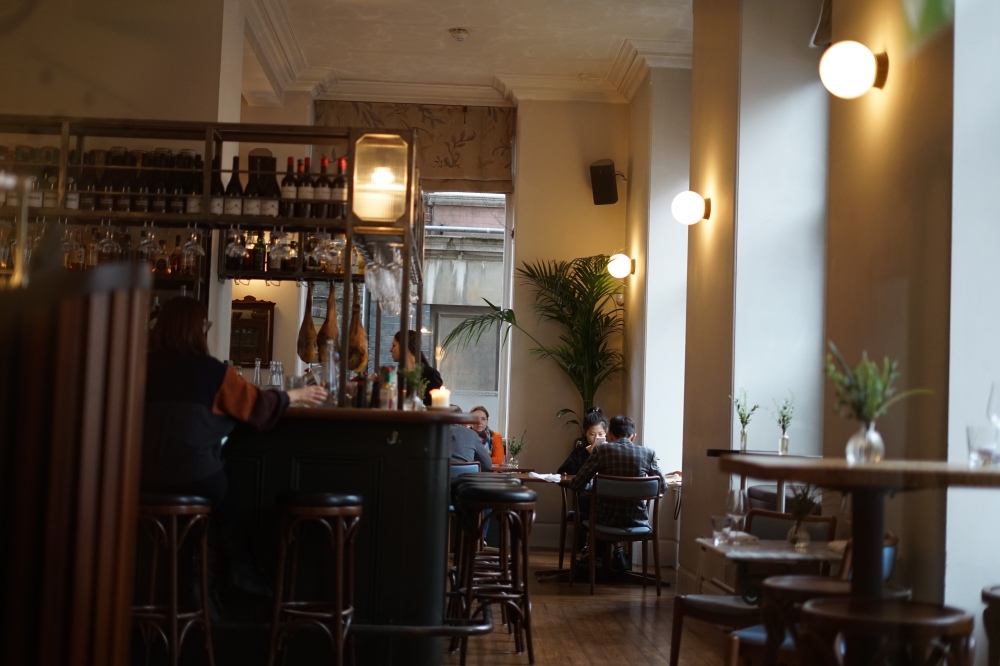 Perched on a high stool at the bar, I was given a couple of menus to look over; both were tasting menus, one short comprising of six courses, and the other with a few extra dishes.  Knowing I’d arranged a big dinner also, I thought the shorter menu would suffice for lunch, so placed my order and waited for the magic to happen.

The Clove Club is what I’d consider ‘new school’ and is run by one of London’s ‘young turks’, Isaac McHale; who’d spent time honing his trade in The Ledbury, Noma and Eleven Madison Park (new #1).  Very much eschewing the traditional, chef McHale’s style is to push the envelop of cooking and deliver exciting and tasty food that you’d not find in the likes of (say) Apergé (post pending).

That interesting and contemporary view of food was on display very early on in my meal, with a couple of ‘snacks’ to start the culinary journey.

A light blue earthenware bowl was presented with a splash of bright purple beetroot and apple granita covering a walnut cream.  I loved the contrasting colours, which were matched by contrasting flavours; the earthiness of the granita, a little sharpness from the apple then a hit of sweet creaminess from the walnut cream.  It wasn’t just textures and colours that contrasted, there was temperature too.

It was followed by a mackerel ‘sandwich’; chunks of fatty mackerel mixed with apple, sorrel and mustard squished between crunchy rectangles of ‘toast’.  With quite a fishy hit, there was equal measures of sweetness and heat that lingered on the palate after devouring. 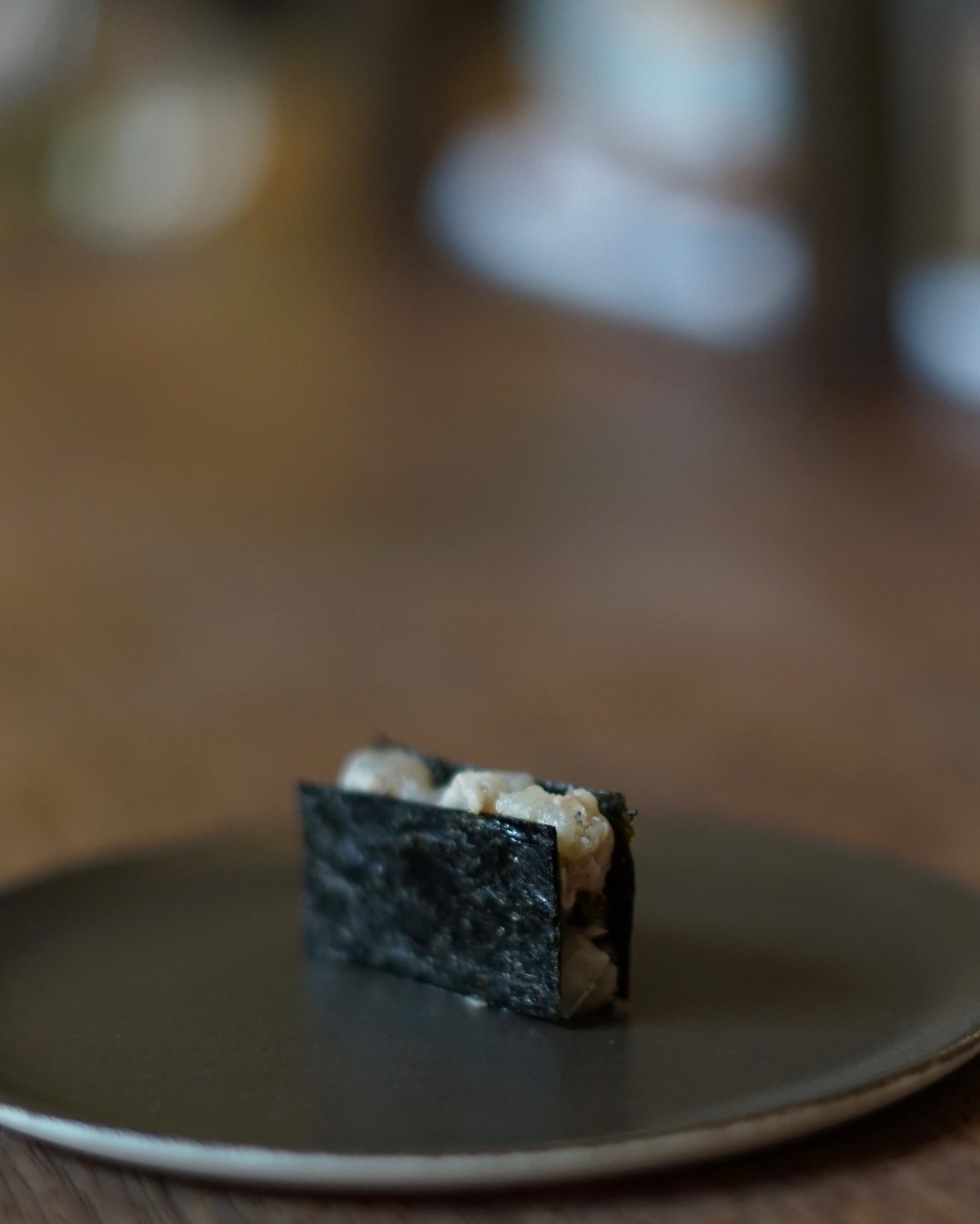 My last two snacks included some fried chicken presented in a bed of pine needles and a haggis donut ball presented in a box.  I particularly loved the golden crusted chicken ‘nugget’, which was succulent and juicy and oh-so-full-of-flavour.  With a subtle heat coming from that golden coating, its was like the grandaddy of chicken nuggets. 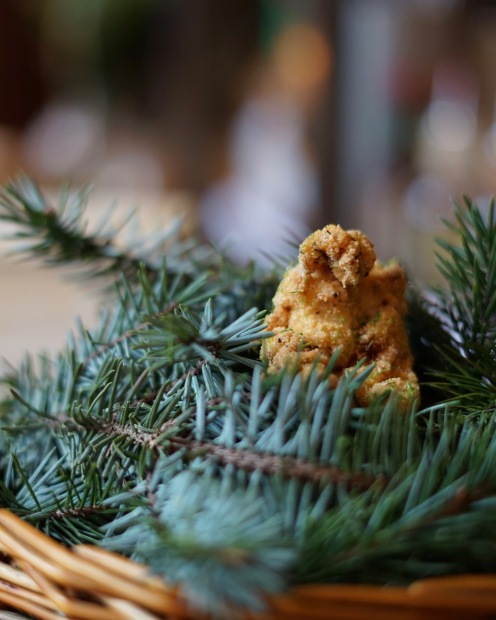 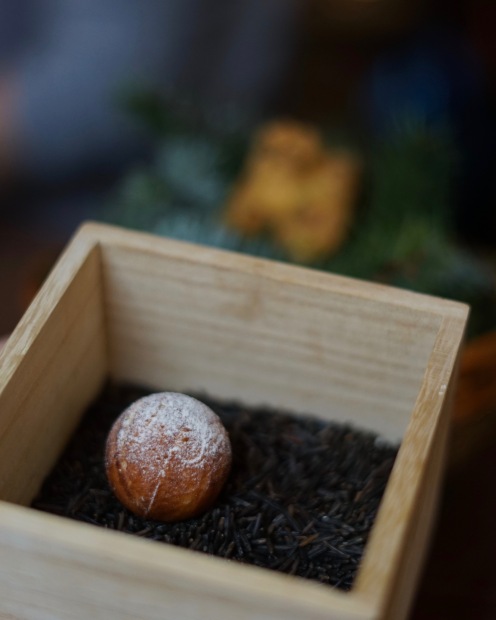 On the other hand, I didn’t love the haggis donut, it was a little dry and I couldn’t quite get my head around the flavour; weirdly both benign and overpowering at the same time.

It was time for the tasting menu itself to start, which kicked off with a slightly larger sky blue earthenware bowl, this time with a splash of orange from the finely diced hay smoked trout.  A think and velvety pink fir potato soup was poured over the tartare, adding a different colour and texture to the dish.  I absolutely loved the sweet freshness of the subtle trout, which contrasted with the earthy potato soup and thin potato fingers adding a salty crunch to the dish.  I noted a zingy little heat that came from some dehydrated sansho (a Japanese pepper), which helped balance out the bowl wonderfully. 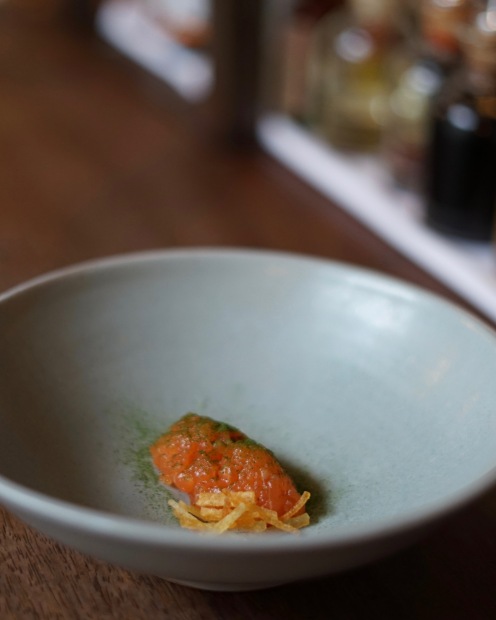 I was gobsmacked by the wonderful flavours of my second dish; raw Oakey scallops sliced thin and placed on a bed of squid ink sauce, thin fingers of truffle interspersed with slices of mushroom and crunchy hazelnut.  There was a huge umami hit to go along with the delicate flavour of the scallops, which sang with the inclusion of clementine to provide a slight acidity for balance.  I’m not sure what was included in the squid ink sauce at the bottom of the plate, but it was insanely delicious; I simply wanted to lick the plate clean (so that’s what I did). 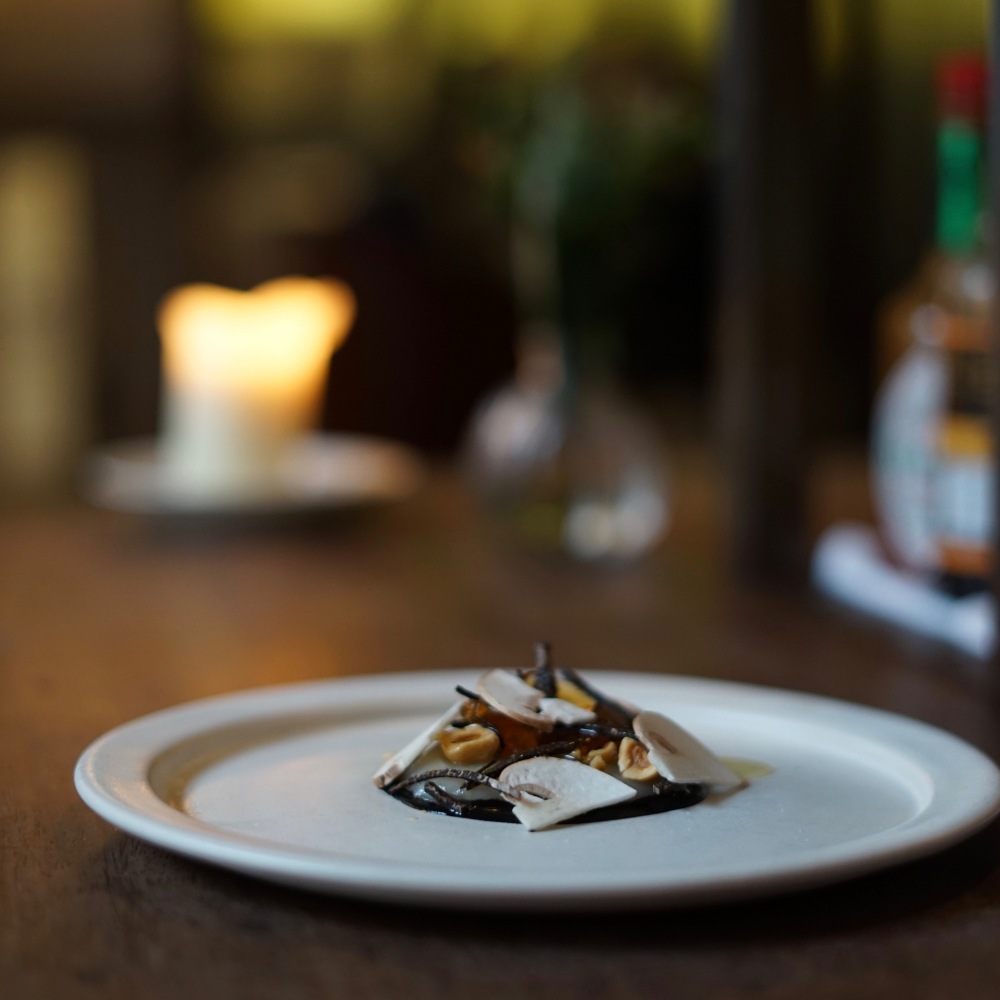 Even though I’d ordered the shorter tasting menu, the team at The Clove Club brought me out a couple of dishes from the extended menu.  I guess a guy sitting along in a restaurant with a huge camera might set off some alarm bells, so I figured the kitchen wanted to show off some of their extra dishes.  Anyway, I absolutely loved the mullet bone broth with wild Scottish seaweed; it was actually a creamy and earthy chestnut velouté that expertly mixed sweet and salty flavours.

The next ‘scheduled’ component of the tasting menu was halewood grilled pollock with calçot onion, cinnamon and curry leaf.  I was a little conflicted by the dish; I loved the expertly cooked and very flakey pollock, especially where the salty skin had been caramelised.  However, I’ve never been a fan of Indian spices, so the curry leaf was a little jarring on my palate; but I will say, I can’t imagine the dish without that very particular flavour.  There were lots of interesting textures on the plate too, a velvety foam was added and the sharp onion that was also caramelised nicely.

We went back to the extended menu for my next course; and while I was extremely thankful about the addition, I was also a bit embarrassed to force the team to change it up.

There was quite the story behind the duck, morel and ginger consommé; which largely resolved around the 100 year old madeira that it was normally served with.  A quick clarification and a suitable replacement was found; Seedlip, a distilled non alcoholic spirit was added at the last moment.  For me, it was an inspired choice, the Seedlip was added to a brandy glass then followed with a decent hit of duck consommé (which was poured from a crystal decanter).  There was incredible purity and clarity in the broth, which was visually stunning, but more-so beautiful to consume. 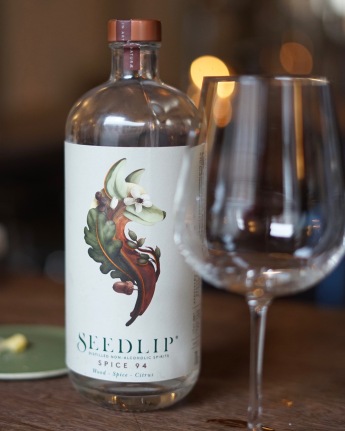 ‘Main’ course of the tasting menu was textures of lamb, sweetbreads and smoked ribs, which was presented simply on a plate.  Each of the components were placed in a circular pattern and surrounded a sticky sauce that also had mild Indian spices.  There were flavours of a traditional Sunday lamb roast, but amped up with incredible flavours and interesting textures from each of the components.  The star of the show was the tender pink lamb, but I was particularly taken by the sweetbread, which was super intensely flavoured.

I loved, loved, loved the palate cleanser of amalfi lemonade and kempot pepper ice cream!  A wonderful balance of a buttery layer of cold cream followed up with the tartness from the lemon ice-cream (soft serve style).  It was super refreshing and I could have had a much larger serve and been totally happy. 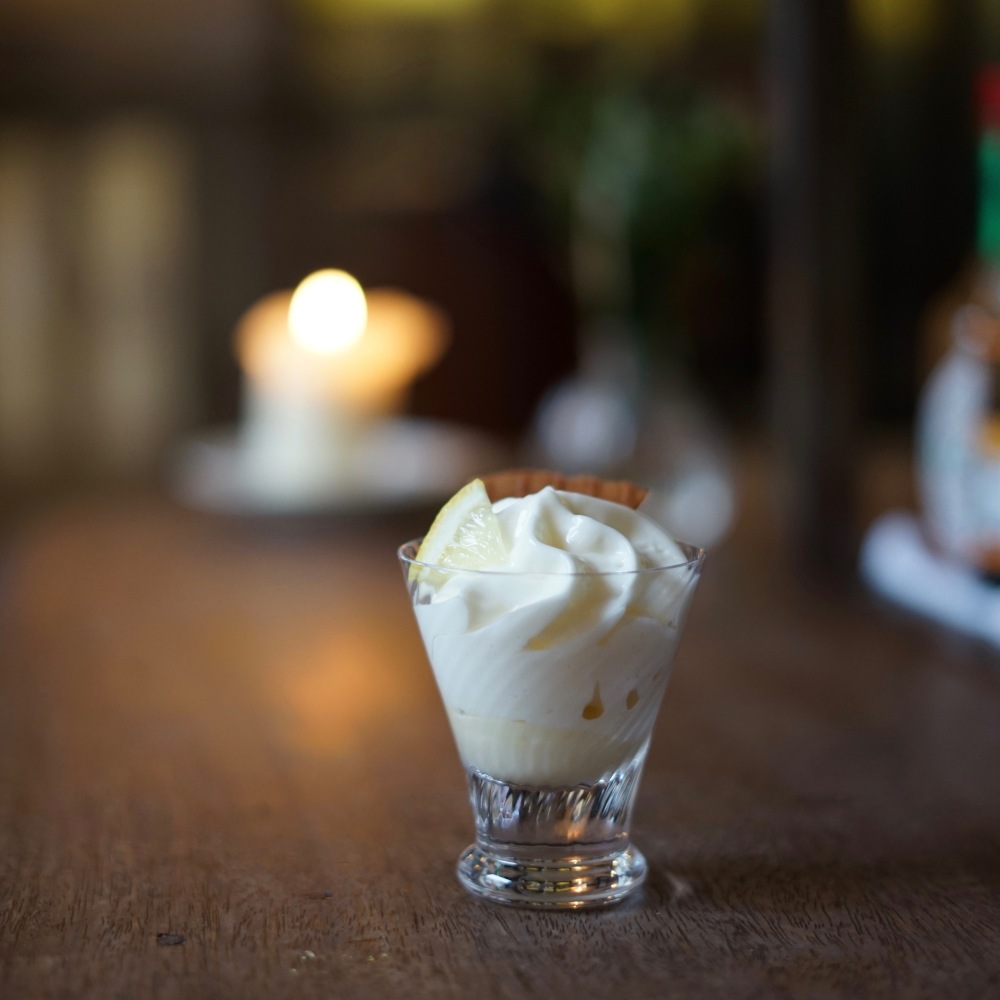 It was followed by an equally delicious main dessert, which comprised of Yorkshire rhubarb, sheep’s milk yoghurt parfait and flavours of rose.  It was actually much like an ice cream sandwich, with super thin and crunch sweet tuile ‘top and bottom’, sandwiching an incredibly creamy parfait and chunks of soft and tart rhubarb, along with a rose jelly.  The dish made a satisfying crunch as I smashed the tuile outer; and an even more satisfying end to a superb meal.

Throughout my lunch at The Clove Club, I’d been entertained by the really friendly staff, which is one of the benefits of sitting at the bar.  The team were knowledgeable about the food and were totally interested in ensuring that I had a great time.  I loved the professional but relaxed approach that the team took, it wasn’t stuffy at all and made the dining experience all the more enjoyable.

It can be intimidating when you visit one of the top restaurants in the world, however I have to say that I never felt uncomfortable at all during my time at The Clove Club.  I guess it comes from the approach of Chef McHale and his team; taking simple foods and turning them into delicious and interesting meals that are completely accessible to all.

In my recent travels around the globe visiting many of the top restaurants, I’ve had some pretty disappointing meals, meals that to be honest, haven’t lived up to the expectations set by being a top 50 (or 100) restaurant.  I have to say that I had no such issues at The Clove Club the meal was inventive and super tasty, well valued and well deserving of it’s recognition and accolades (which of course includes a Michelin Star).

I definitely plan on going back to The Clove Club, which along with it’s Shoreditch neighbour Lyles (see post here), were the highlights of my dining year to date. 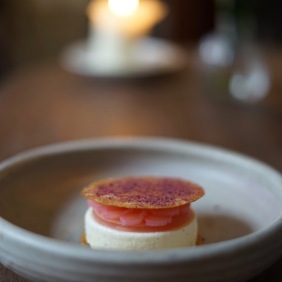 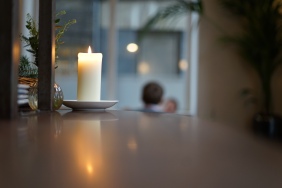 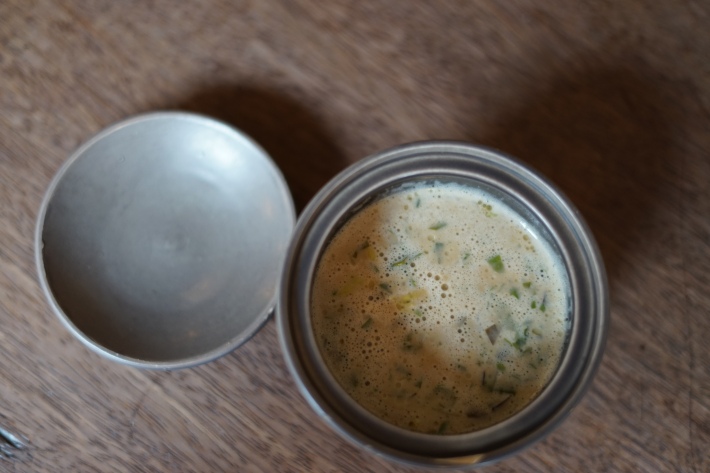 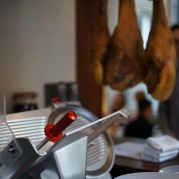 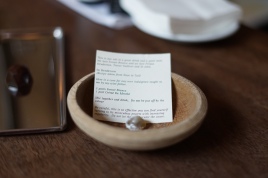