Sometimes you take a punt and it pays off.  Sometimes not.

With so many quality restaurants in London, many with Michelin stars, it’s sometimes hard to decide on where to go.  I mean, you generally expect a certain level of quality at Michelin starred restaurants, but I’ve  been disappointed before.

I’d been pigging out a little bit on my London trip, I guess that’s what you’d expect from a food blogger though, right?  Well, I’ve been trying to balance our my super rich meals (usually French) with slightly more health options, which is why Angler at the South Place Hotel caught my eye.

One of the few fish themed restaurants that had been awarded a coveted Michelin Star; Angler is renowned for showcasing sustainable seafood from British waters and matching with the best seasonal, local produce that Executive Chef Gary Foulkes can muster.  I was pretty excited to have some healthy and tasty food, and doubly so given Chef Foulkes had been the head chef of Two Starred ‘The Square’ prior to taking the helm at Angler.  FYI, The Square made it to my #1 spot for last years Food Me Up Scotty Top Ten (see post here).

I’d made my booking online for a relatively early 630pm slot and upon arrival, was informed that my reservation had not arrived (I’d actually booked for the following day!)  Thankfully though, the maitre ‘d was able to find a table for me without problem and I was seated in a lovely and light dining room that was dominated by floor to ceiling glass walls.  I loved the setting and the brilliant light that entered the dining room, but it was a shame that the view consisted of the next door office building… 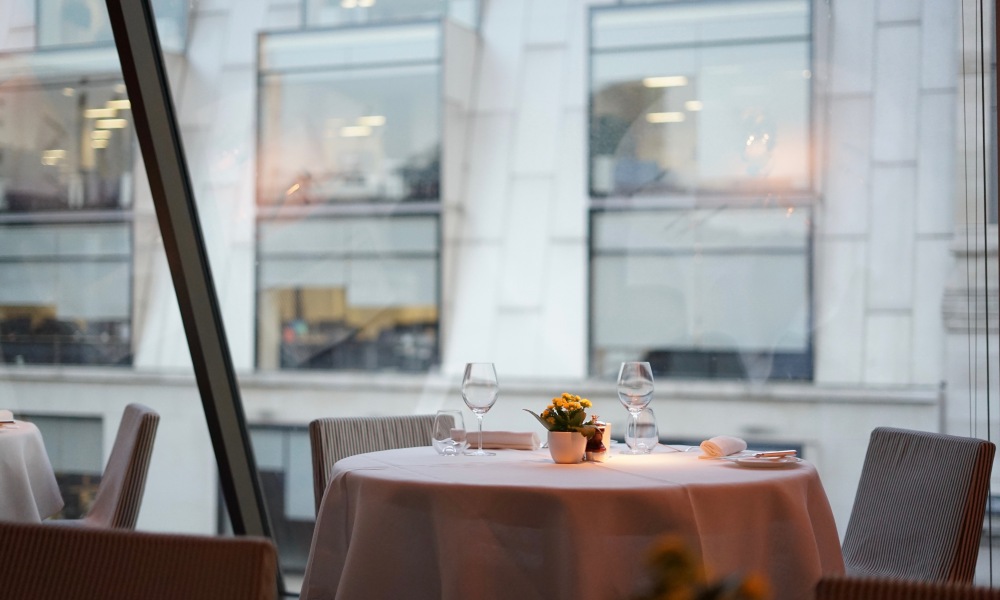 There were a myriad of menu options available, ranging from the a la carte to several tasting menus; liking the idea of a multi course meal, but not wanting everything on the chefs tasting menu, I decided to create my own.  A couple of entrees, a main and a dessert would do the trick, especially given my expectation of some amuse bouche, palate cleanser and petite four.

My premonition of a lovely amuse bouche was realised, not once, but twice!  A little slate rectangle was presented with a sphere of rabbit that was topped with a light foam and then sprinkled with dehydrated seaweed.  The rabbit was incredibly sweet, a light crunch from the frying process helping.  I was a delicious little bite that left me wanting more! 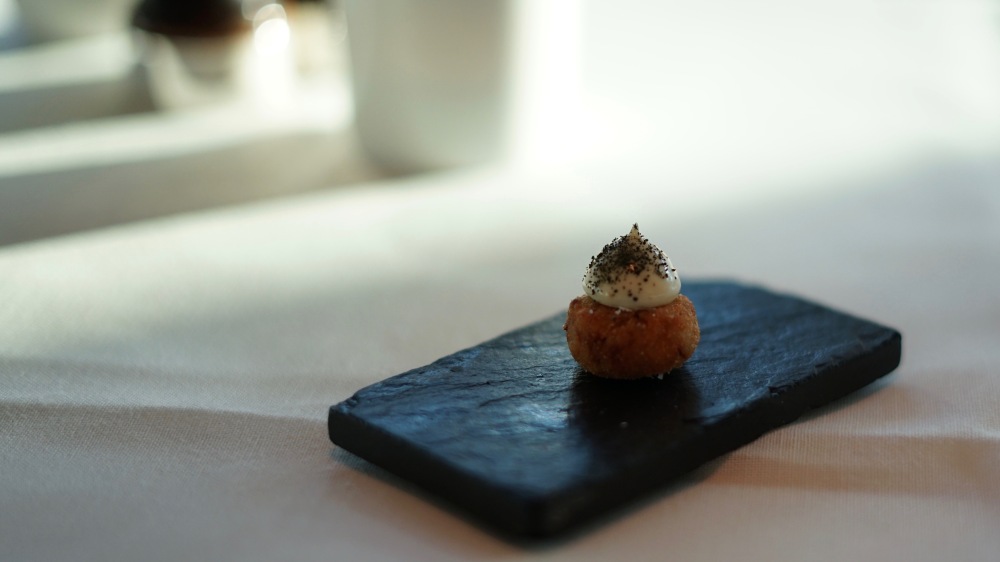 More did come in the form of couple of additional small bites; there was an eel cracker with eel foam and a moussaka cracker with tastes of wasabi.  The two crackers worked in complete harmony, the eel being a little salty and the moussaka being a little sweet.  I loved the crunch and texture of the crackers as one quickly followed the other, so I could get the balance of sweetness and saltiness on my palate together.

A square box was delivered, containing some warm and crunchy sour dough, along with a glass plate decorated as a fish with a quenelle of room temperature seaweed butter.  The natural saltiness of the seaweed really enhanced the taste of the butter and before I knew it, I’d devoured the entire box of bread!  Like most great restaurants, there was an immediate offer to replace the bread; which I declined noting that I didn’t want to fill up on bread!

I knew I’d made the right choice for dinner when my first starter arrived, a simple yet completely elegant looking tartarc of yellowfin tuna with Hass avocado, wasabi and shiso.  Dollops of avocado foam sat atop the perfect round of beautiful looking tuna, little sprouts of garnish poking out for added effect.  There was a lightness and sweetness from the tuna, which I absolutely adored; subtle heat came from the wasabi, enough to provide flavour but not so much to burn the mouth.  Additional sweetness came from the shiso, which had been finely chopped and spread throughout the tuna.  A complete triumph!

My follow up starter was oh-so-light and oh-so-delicate; the roasted octopus was cooked superbly with all of the ‘skin’ peeled away to leave the light pink of the flesh on display.  Served with a salsa verde, tiny little linzer potato, taramasalata and tiny little deep fried tentacles, the dish was a study in restrained cooking and intricate balance.  The acidity and sweetness from the salsa verde was a wonderful foil for the salty puree made from the taramasalata.  I really enjoyed the dish, but felt that I need much more of the octopus; it was the star of the show but there wasn’t so much of it on the plate.  Yeah, it was a pretty light starter and I was glad I’d gone with two. 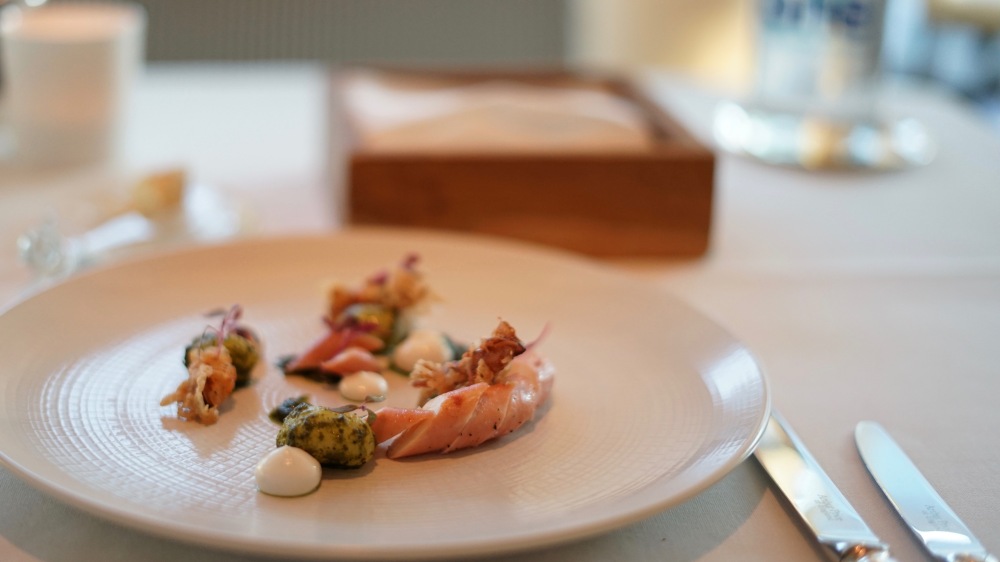 In my opinion, Monkfish is a completely under utilised fish in fine dining restaurants; so I only had eyes for the strong flavoured and heavy textured fish.  It was served with another punchy flavour in some incredibly tasty tomato orzo and a wonderful ‘risotto’ of pastina balls.  All of the punchy flavours needed something subtle to balance out, a task that some wonderfully cooked cuttlefish completed.  The dish was originally designed with some black olives, which I asked to be removed and to be honest, don’t think would have added anything to the dish.  It was well balanced, incredibly tasty and left me wanting more again.  Yep, it was also a little on the small side.

Perhaps not getting a second (or third) helping of bread was not such a great idea. 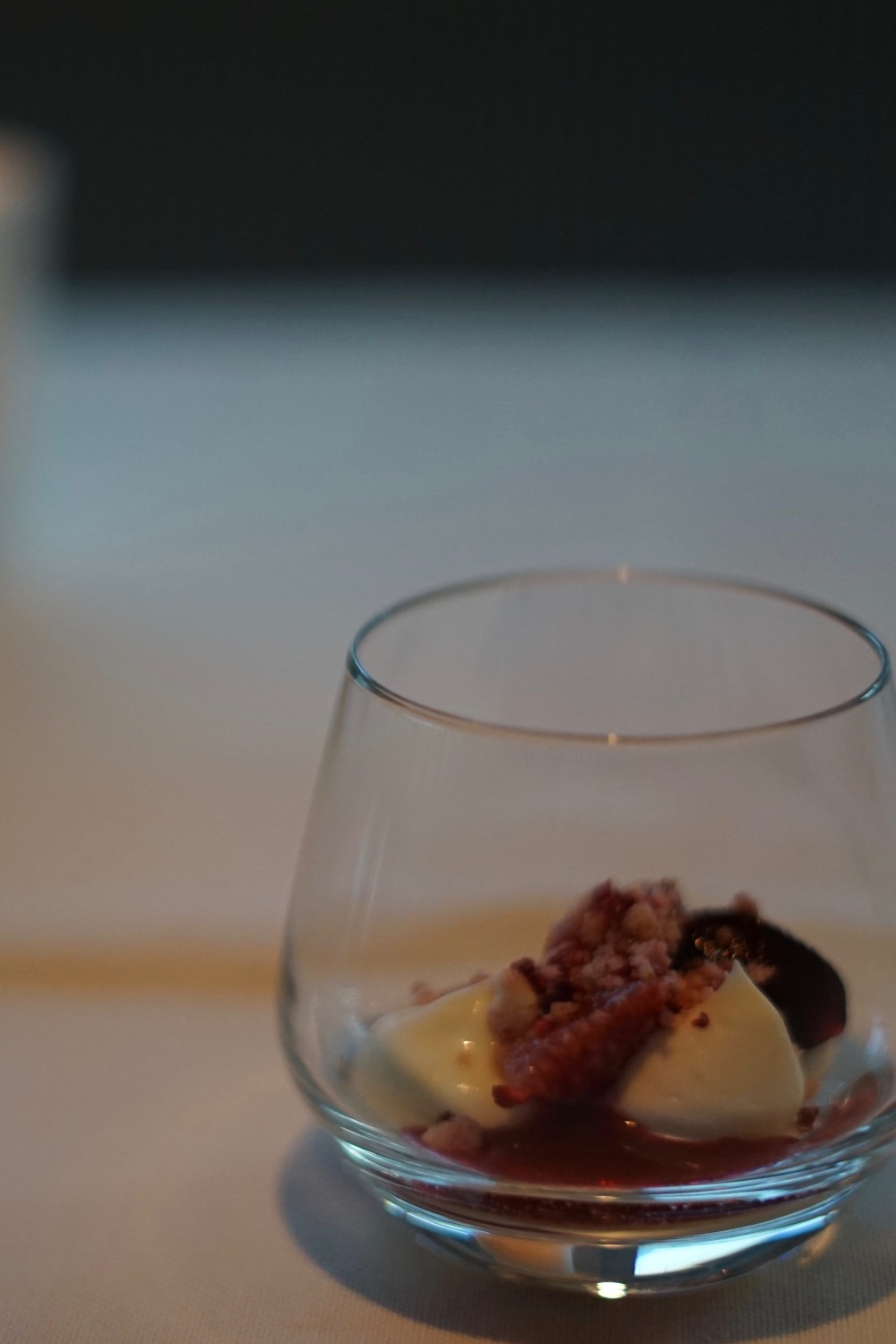 Not knowing what to grab for dessert, I’d put my faith into the hands of my waiter, who’d instantly informed me that the warm baked 64% chocolate with banana milk ice cream was the only choice I could make.  Running with the suggestion, I was presented with a simple round of chocolate with a crunchy crumble and a quenelle of banana ice cream.  The thing that surprised me most was the texture of the chocolate, which was incredibly soft, so soft that I was surprised it could hold its form.  I also loved the subtle hit of banana against the chocolate and there seemed to be chunks of white chocolate in the crumble, adding not only texture but extra sweetness.  The slight bitterness of the chocolate balanced incredibly well against the sweetness of the ice cream.  No wonder it was the first choice of the wait staff!

The meal finished off with a little petite four, which was a lemon curd and toasted meringue tart; it was tiny, beautiful and incredibly tasty.  A little sweetness overload to send me back out to the busy streets of London. 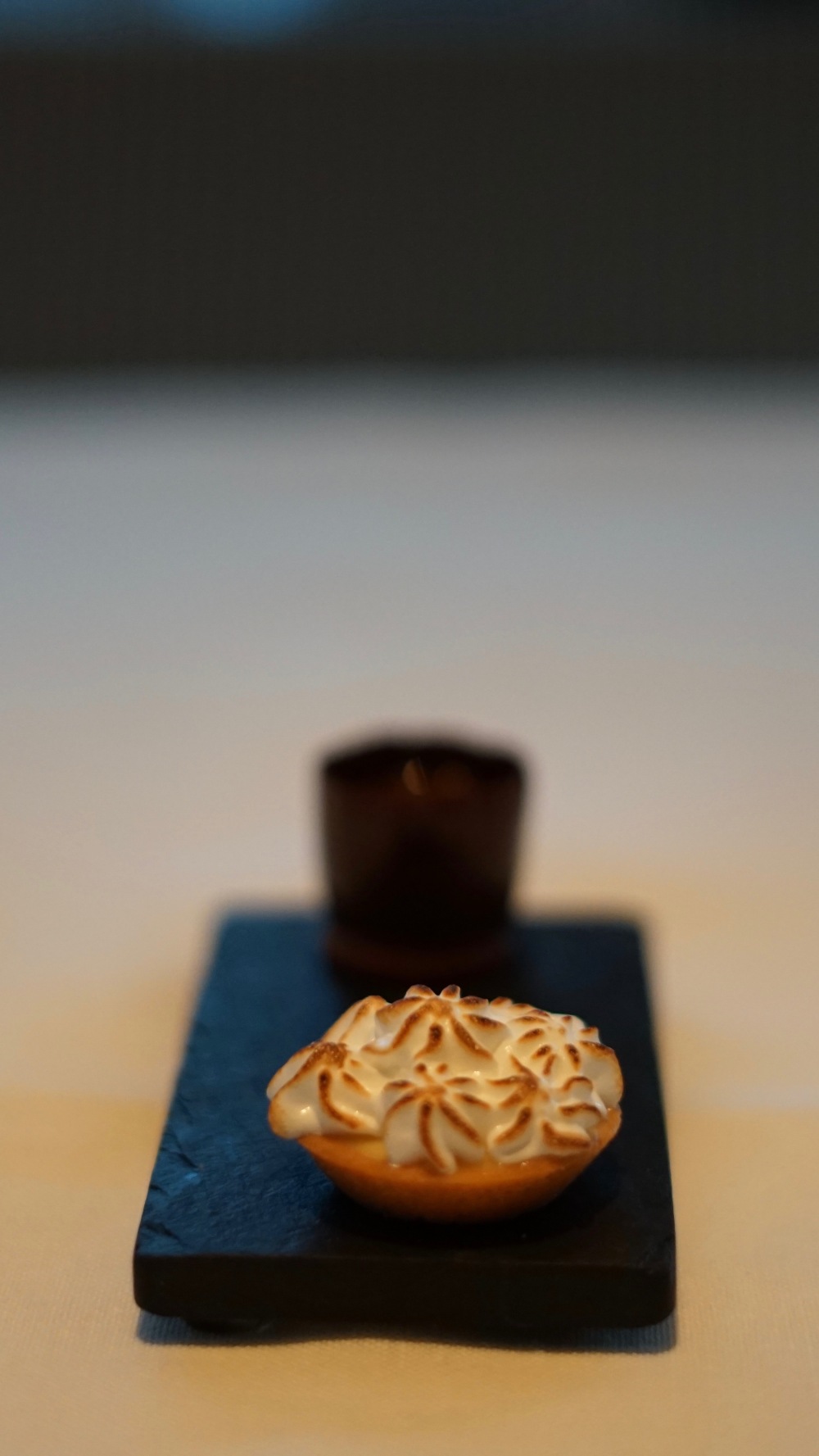 I’d been caught completely by surprise by Angler; I loved practically everything about my meal.  Service was impeccable, completely friendly and very professional.  As a solo diner, I was never left alone for too long and I felt completely welcomed.  The setting was glorious; fancy but not pretentious; light and airy with a feeling of spaciousness.

The food was superb; Chef Foulkes bringing everything he’d learnt running The Square and adding his own flair and affinity for the best produce the ocean had to offer.  If I had one minor quibble, it would be over the serving sizes, which were a little on the small side.  If I’d not had the additional starter, I’d have left feeling a little hungry (in search of more food!).

Angler is now one of my favourite restaurants in London, I’ve already recommended it to several people as a place to check out.  It’s a place that I’ll definitely bring the girl the next time we’re in London together; Angler and The Square….

Mmmm, I wonder what they had in common?! 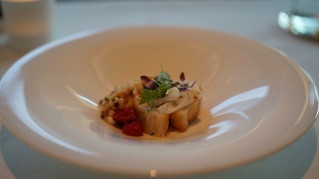 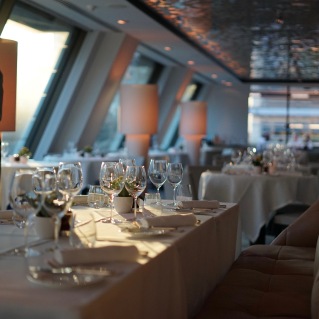 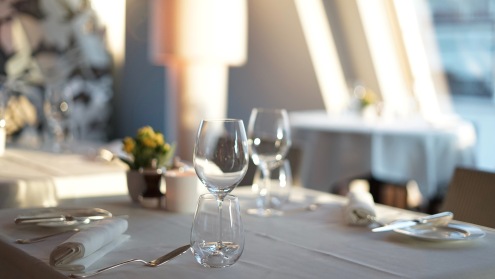 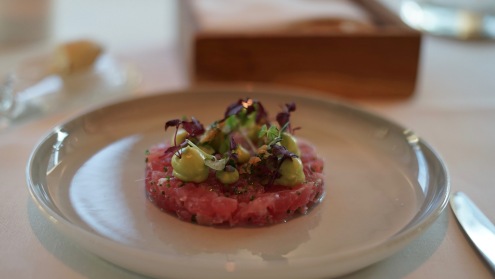