I still haven’t figured out how to get into Restaurant Gordon Ramsay, the three Michelin starred showpiece restaurant that’s rated as one of the UK’s best.  Every time I’ve travelled to London, I’ve attempted a booking, on any day for lunch or dinner and have been stymied at every turn.  There must be a secret code or website that only the well heeled know about; I wish I knew about it!

Anyway, setting aside my frustration at yet another trip to the UK’s capital where I’d failed to book a table, I went for the next best option in the Ramsay stable of restaurants; Petrus.  Also bestowed with a Michelin Star, Petrus seemed like a suitable choice for a lovely dinner and would have to do for me to satisfy my Ramsay curiosity. 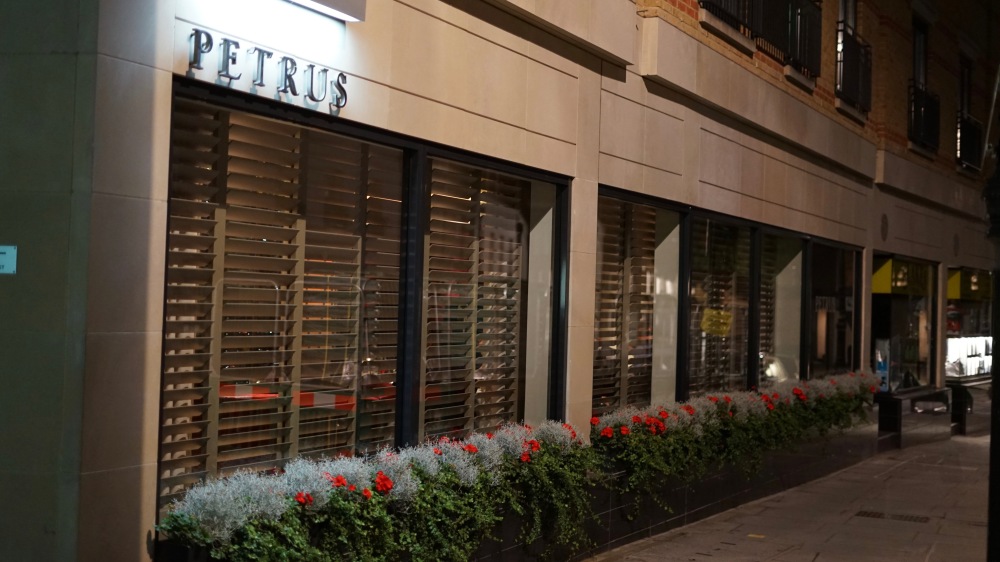 Like all Gordon Ramsay restaurants, the great man himself selects Head Chefs to carry on with his high standards and in the case of Petrus, it is Sri Lankan born chef Larry Jayasekara.  Chef Jayasekara began his career at Petrus before spreading his wings and working at the two starred Marcus Wareing and the three star Waterside Inn.  With such amazing credentials on his resume, it was no wonder Ramsay lured him back to Petrus as Head Chef.

Amazingly, even though I was quite early for my reservation, I was not the first into the dining room, not even close.  It became apparent quite quickly that Petrus was no ordinary Michelin starred restaurant.  Many of the tables that had diners already enjoying their meals who were quite clearly Knightsbridge locals.  Sure, why not?  There is a bit of coin in Knightsbridge, so why not have a Michelin starred restaurant as your local; I do it in Hong Kong…

I was shown to my table, which was right next to the restaurant’s amazing and quite well known wine cellar, which was a circular glass enclosure displaying the thousands of bottles of wine Petrus is known for.  Alas, the cellar would be wasted on the likes of me, I was just there for the food; I even noticed the little look of disappointment when I passed on the wine menu when it was offered.

Even though I was shown to my table moments after entering the building, I actually sat at my table for a good five (or more) minutes before I was again recognised by anyone.  It gave me a chance to look around the restaurant, but it was also just long enough for me to feel a little uncomfortable.  Eventually my waiter came across and offered me a menu that was quite different from what I’d expected.  As it turned out, when I was booking online, I’d asked for the ‘special’ (read that as cheap) menu.

I didn’t need to look at the menu for long, there were plenty of delicious looking items available; but a couple stood out clearly and had me salivating at their promise.

Shortly after my waiter, who still seemed a little ‘stiff’, took my order, I was presented with a little wooden container that held slices of warm crusty sour dough and a decent slab of salted French butter.  The bread was accompanied by a rustic looking ‘log’ that held the evening’s amuse bouche; rabbit with summer truffle and a ricotta cheese foam.  Both small bites were delicious but it was the crusty bread and butter that I enjoyed the most.

A little surprise followed, an unexpected second amuse bouche of potato foam with chives and lime jelly topped with potato crisp strips.  The light airy foam dissolved on the palate so quickly, leaving a wonderful sweet aftertaste of chives and lime.  I really liked the small bowl and could easily have gone another round!

My beautiful looking starter for the evening was the butter poached native lobster with girolles, truffle cannelloni and wood sorrel.  A lovely bisque was poured over the luscious looking lobster tail, leaving it glittering in the light of the room.  Next to the exquisitely poached tail was a cannelloni that was stuffed with lobster, topped by tiny little mushrooms and finished with wood sorrel and truffle.  The combination of the lobster and bisque, along with the cannelloni was superb, the flavours well balanced and very light on the palate.  I completely devoured the dish, mopping up every little drop of that bisque, wishing it has been a larger serving. 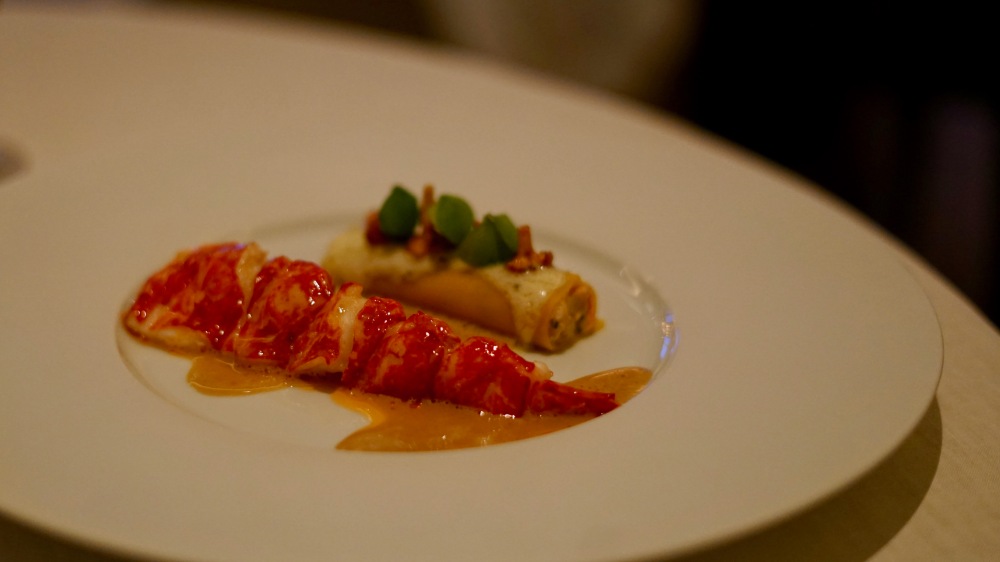 I was probably a good thing though, my main more than adequately filling the gap in my appetite.  The Herefordshire beef fillet was presented with broccolini, black garlic and Dorset snails; the medium rare beef perhaps the most tender I’d ever eaten.  There was a touch of caramelisation on the outside, but otherwise, the beef was pink all the way through yet exquisitely cooked.  A sticky jus was poured over the beef at the table that was rich and complex, the perfect foil for the beef, as was the black garlic puree.  There were three stalks of broccolini and a broccoli puree on the plate that were almost inconsequential but there to balance out the beefiness of the dish.  I didn’t really understand the snails, of which I’m usually a fan, and thought the dish gained nothing by having them there. 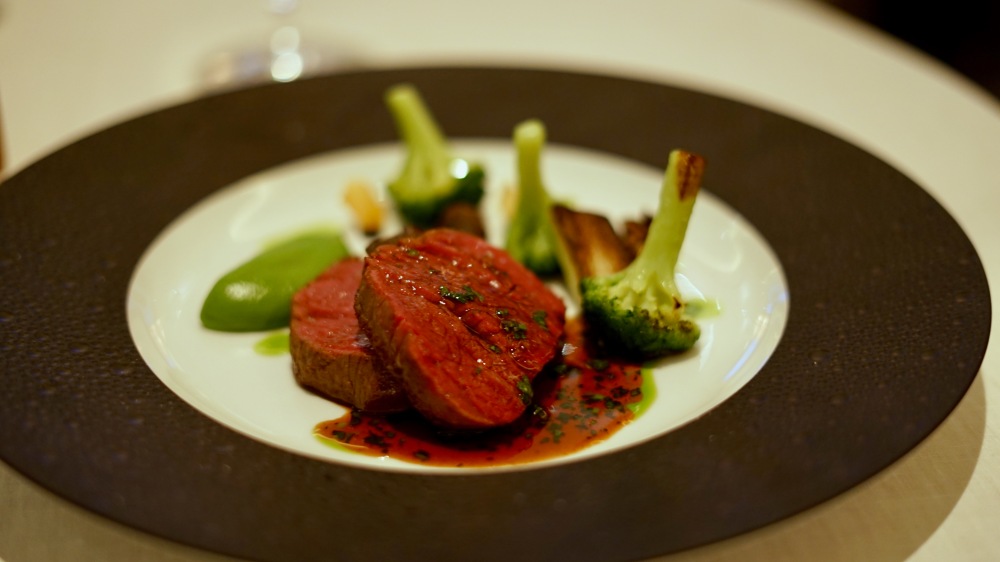 It was around the time of eating my beef that I’d noticed Chef Jayasekara poking his head out of the kitchen and looking over at my table.  I’m guessing a solo diner with a kick ass camera is a flag for good restaurants and it wasn’t long before my waiter came over and offered me a tour of the kitchen and an opportunity to meet Larry.  I didn’t need to be asked twice and grabbed my camera and followed my chef to the kitchen, which happened to be downstairs. 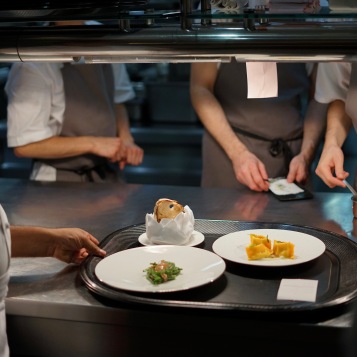 I have to say; whenever I’ve visited a Ramsay restaurant in the UK, I’ve ended up meeting the head chef and having a good chat about the food.  Chef Larry was a pretty cool guy who was incredibly proud of working at Petrus and gave me the goss on how the kitchen worked, what it was like working for Ramsey and most importantly, the background story to the Herefordshire beef…  (sourced specifically for the restaurant).

Eventually making my way back to my table, a palate cleanser soon appeared.  A simple dish of watermelon granita with lemon curd and pieces of melon was all it took to get me super ready for dessert.  I particularly liked the sweet freshness of the granita against the tartness of the curd.

My choice for dessert was a tough one, with nothing really jumping out and demanding to be selected, but I was happy with my choice of milk chocolate delice with Kent raspberries and rosemary ice-cream.  The dessert was well crafted and quite elegant looking in an understated kind of way.  The milk chocolate delice was soft and unctuous and held in place by some tempered chocolate; the rosemary ice-cream quenelle perhaps the most perfectly formed I’d seen.  I found the lightness of the ice-cream balanced against the slightly heavier delice to be a perfect balance of flavours, textures and temperatures.  It wasn’t the most outstanding dessert I’ve had, but it definitely left me satisfied.

My meal was finished with the obligatory petite four, which were OK but not memorable; although they were presented in a unique manner (a little copper pot!).

There were a couple of things that really stood out about my Petrus meal, meeting Chef Jayasekara and seeing how he ran his kitchen was right up there…  However, it was my starter and main that were most memorable, both containing wonderful seasonal produce treated with respect and not overworked; delivering a superb and delicious meal.

Service was professional but in my mind, a little contrived and forced.  I’m not sure if it was the poor start with the wrong menu, or the fact that they probably thought I was a food critic or blogger.  Either way, there just seemed to be something a little off and forced about the interactions…  I couldn’t fault the professionalism, but in the end it lacked a little of the warmth that a brilliant waiter brings to the table.

I’m slowly getting to visit many of the Ramsay restaurants in the UK (and here in HK) but the one that I really want to visit still eludes me.  I’m going to be in the UK again in the next six months or so and have definitive plans to keep trying.  Mr Ramsay, if you ever read this post, help a fella out will you?  🙂