A month ago, my best mate was across from Taiwan for a quick visit. We were feeling a little bored and thought that a trip to LKF to check out the night life would be a great way to kill a bit of time.  A quick bus ride later and we found ourselves in Hong Kong’s party district on a Sunday night with no real idea about what we’d do!  Looking through a list of clubs to visit, Ce La Vi was the one that stood out, but alas it wasn’t open.

So instead of looking for somewhere else to go, we just wandered around then made our way back home.  Yeah, sad!

Fast forward a month and I was looking for a restaurant to hit up on a Saturday night and it was again Ce La Vi that caught my attention.

Looking into the joint, it became clear that Ce La Vi was a lot of things, bar, club and restaurant, making it more of a destination hub than either of its sum parts.  In fact, as I delved deeper, it became apparent that the team behind the entertainment hub were responsible for a host of other night time locations spanning the globe.

I was intrigued, so made the reservation; interestingly late on a Saturday afternoon, I had no problems making a booking for dinner the same night.

Located on the top couple of floors at LKF’s California Building, I was quite taken aback with the breathtaking views as I stepped out of our elevator.  It was hard not to be impressed with the view, but I was equally affected by the stunning entrance to Ce La Vi.  The front of house was deep black with huge red feature poles that delved downstairs to the dining room and rose high up the stairs to the bar and club area.

Descending the stairs, there was more of that spectacular and distracting view; it took me a moment before I was able to focus on the contemporary design of the dining room which brilliantly used the space to split your focus from the view to the kitchen area.  The AB Designed interior was dark wood with tables made from cross selections of huge oak trees, as well as comfortable bench seats; all sitting under a living chandelier that was was the focal point of the dining room.

It was quiet when we arrived, so there was quite a bit of focus placed on us from the friendly wait staff; including one who we’d seen many times at another favourite restaurant who’d moved to Ce La Vi.  We were given our menus to peruse and had a lovely conversation with the team that spanned such topics as the difficulty in HK dining right the way through to talking about my tattoos.

We were also given a run down on Executive Chef Philip Pak’s menu, a take on modern Asian, which spanned many parts of Asia and was quite hard to define.  With so many awesome looking items, we initially struggled to limit our choices but with some tough negotiations, finally settled on a series of share dishes that we were both comfortable with.

First out was a staple of Japanese cuisine, edamame.  We loved the slightly addictive soybeans lightly dusted with Maldon sea-salt flakes and promptly started sucking the beans from their husks, quickly filling up the spare bowl.  In what would become the theme of the night, our attentive wait staff kept a close eye on the bowl and quickly whisked the empty husks away, replacing with a clean bowl. 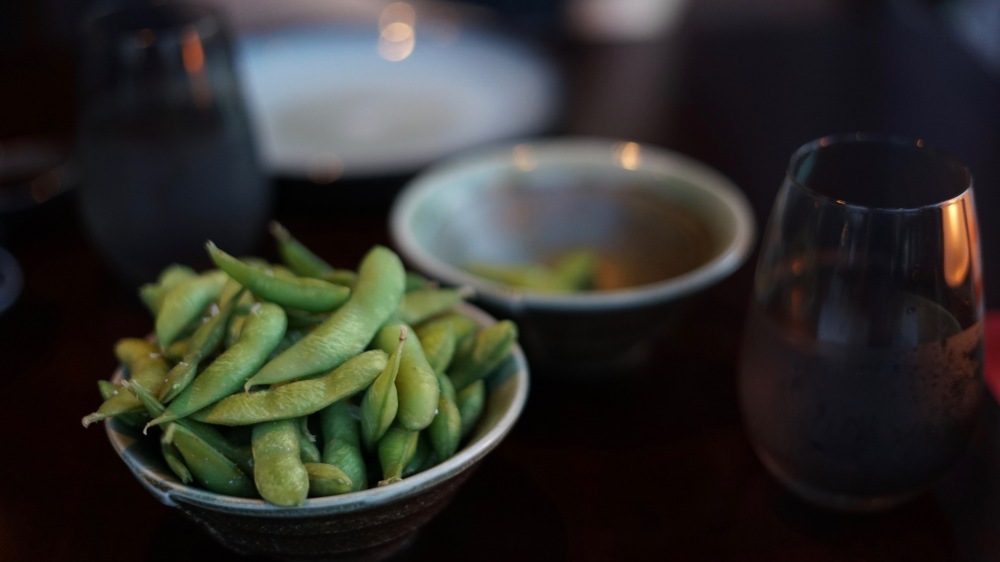 As we were nearing the completion of our edamame, our sashimi platter arrived.  The super fresh raw fish arrived in a beautiful plate that very much resembled a wave crashing on a beach. Containing tuna, yellowtail, snapper, fluke and salmon, we quickly set about devouring the dish in record time.  For me, the snapper was the tastiest portion, with a strong flavour of the sea that contrasted wonderfully with the soy dipping sauce. 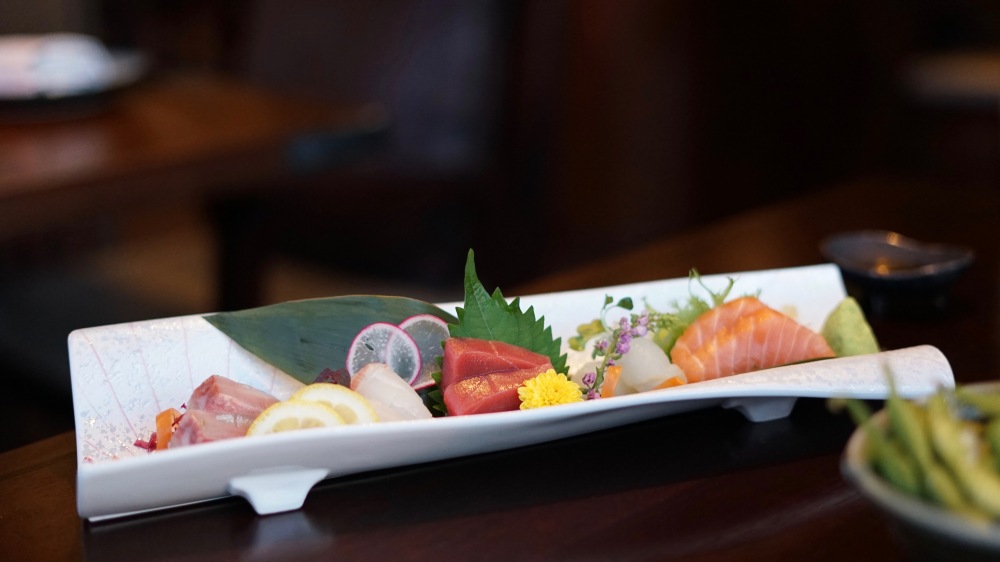 Continuing with more raw fish, our next dish was a very unique take on a classic.  The Blue Fin tuna tataki was prepared with a citrus sauce instead of a traditional ponzu.  Accompanied with caramelised shallot, maitake mushroom and wakame (seaweed), the lightly grilled Blue Fin was simply stunning. I loved the presentation but more importantly, the fresh tuna was full flavoured and was enhanced significantly by a tosazu sauce and hints of citrus. 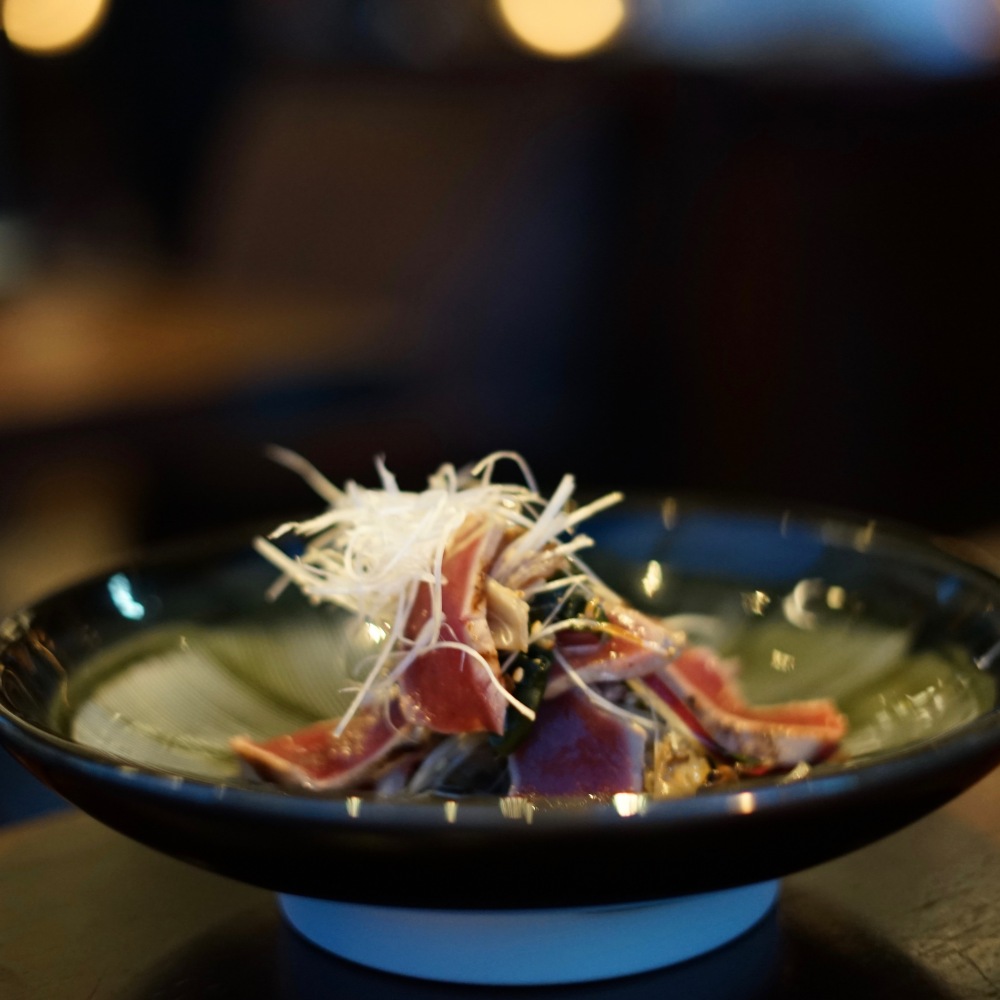 We moved away from raw fish, but kept with the raw food theme with the 300 day grain fed beef tartare, again beautifully presented with quail egg, wasabi ponzu and dijon mustard.  There was a sharp hit to the beef from the wasabi ponzu and mustard that really enhanced the flavour of the beef.  While I loved the tartare, I wasn’t a huge fan of the brioche that was served with the beef, finding the texture too light and crumbly to accompany the strong flavoured beef.  I’d have preferred something a little firmer to both hold the beef together but also make it a little easier to eat.

At last we moved onto our mains and departing from pretty much raw food, it was time to really test out Chef Pak’s cooking by actually eating food that had been cooked!  The girl’s choice was the organic chicken with white miso, Thai peanut satay and ginger.  The huge plate of chicken was the most rustic looking plate that we’d seen, served on a lovely ceramic plate, the chicken was cooked perfectly and interspersed with lightly work fried vegetables.  There was a full flavour coming from the expertly cooked chicken, which was very tender and easy to eat.  The Thai satay was not at all overpowering and just left a light taste on the palate; having said that, we really didn’t pick up much ginger.

I was more than impressed with my selection of Alaskan Black Cod with Saikyo miso and negi (Japanese spring onion).  Simply presented on a banana leaf on the plate, the cod was exquisitely cooked, with the miso giving the fish a slightly caramelised look.  It was a holy crap moment to be honest, the fish was delicious, especially that sticky glaze that penetrated the flesh and enhanced the natural sweetness of the fish.  The most delicious part though, was the salty and sticky skin, which I peeled off the top and ate in one bite….  Yum.

Our mains were augmented by a couple of sides that were really, really yummy too.  I loved the simplicity of the baby corn covered in cheese and cooked in butter; not only delicious, they were very addictive and before long, the bowl was picked clean.  We had mixed views about the snow peas infused with soy and itogaki.  Initially they were great, but as we delved deeper into the bowl, a hidden heat intensified that made them very difficult for me to eat (less so for the girl who happily munched away on them throughout our mains).

With full bellies, we turned to dessert, which for the girl was the Hong Kong Cappuccino; passion fruit cream mixed with milk tea ice cream and Macallan foam, served in a cappuccino cup.  It was the Macallan scotch that attracted SC to the dessert, which was one of her favourite scotches (we usually have a bottle stored around the apartment for emergencies!).  It was a simple looking dessert that had layers of flavours which were quite complicated and worked very well together. 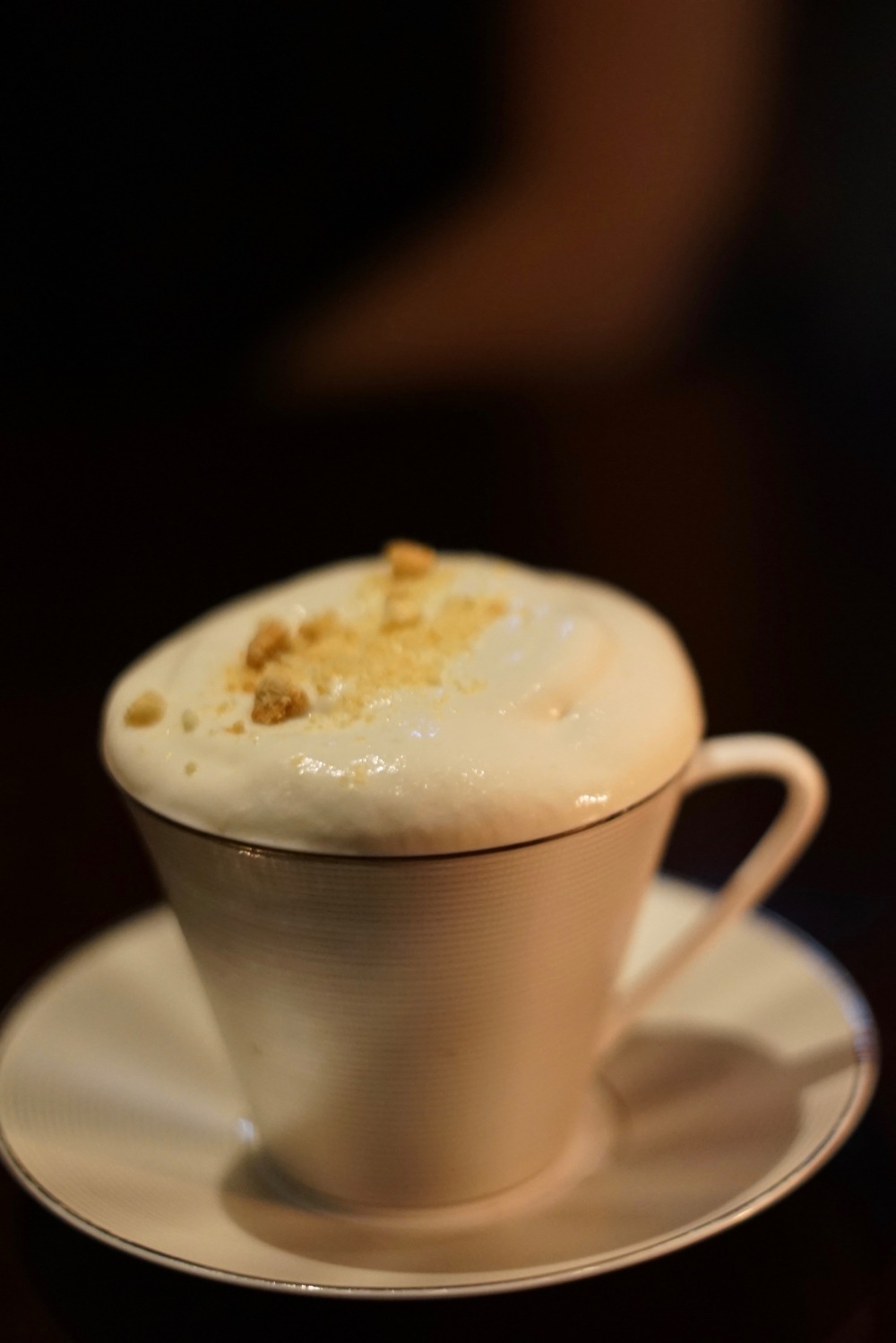 I’d been expecting something quite different when I’d ordered the blueberry and calamansi orb; in my mind I’d been picturing a spun sugar orb with the blueberry mousse and calamansi centre inside.  Instead, the dessert was more like a sphere of blueberry mousse with a hit of citrus from the calamansi inside, then decorated with dehydrated raspberries and praline.  Look, there was nothing inherently wrong with the desert, it was sweet and savoury and hit all the right notes.  It’s just that I was expecting something really fancy, so it fell a little short of my expectations.

There were a couple of things that really stood out about our visit to Ce La Vi, firstly, the service was exemplary – just first rate and very memorable.  There was one moment when the sommelier made a recommendation that the girl wasn’t so sure about, but was insistent and thankfully SC relented because she really loved the recommendation!

Also standing out was the food itself!  We’d taken ourselves on a culinary tour of Japan on our visit, we equally could have devoured food from many other regions in Asai.  Definitely reason to go back!

We’d struck up a good rapport with the restaurant and I suspect that they’d cottoned on that I was a food blogger by the end of the meal.  The were really keen for us to continue our night on upstairs at the bar and club, at one point wanting to take us on a tour of the venue.  As tempting as that sounded, we were really only out for dinner; so for us, it would be an adventure we would take on our next visit.

There’s a certain irreverence in the name Ce La Vi, which translates into ‘That’s Life’.  It was clear from our visit that the team at Ce La Vi take things a little more seriously than the almost flippant naming, but then again, it’s that juxtaposition between name and attitude that makes Ce La Vi a place that I’d love to get back to.

Sooner rather than later! 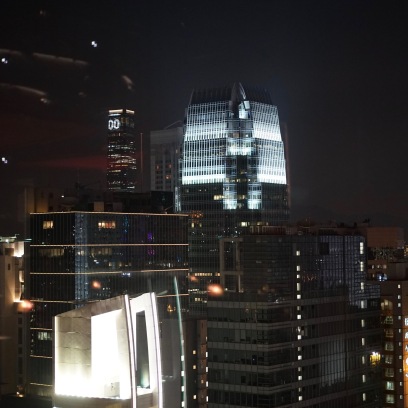